Turkey: One-Day Delay Has Costed A Pretty Penny To Groupe SEB: An Overview Of The Hindering Of The On-Site Inspection Decisions Of 2021

On January 9, 2020, the Turkish Competition Authority ("TCA") has rendered its Groupe SEB decision1 ("Decision"), in which it decided that Groupe SEB Istanbul Ev Aletleri Ticaret A.S ("the Firm") have prevented the on-site inspection. Accordingly, the Turkish Competition Board ("Board") imposed an administrative fine amounting to the 0.5% of its annual turnover. The on-site inspection had been conducted within the scope of the preliminary investigation which reached a final decision2 with the findings of the infringement of the Article 4 of the Law No. 4054 of Protection of the Competition ("Turkish Competition Act") via maintenance of the resale prices and restriction of the online sales. As a result of its full-fledged investigation, the TCA has imposed the Firm an administrative fine in the amount of 27 million TL3 in addition to the monetary sanction implemented on the grounds of the prevention of the on-site inspection.

Background of the Decision 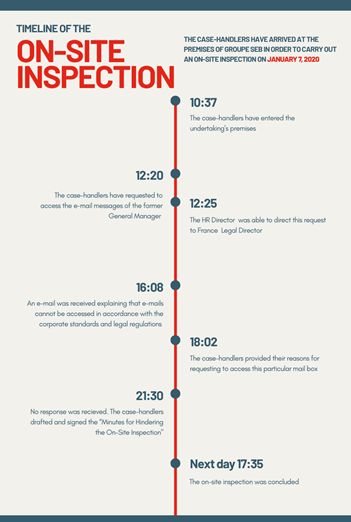 In November 2019, the TCA decided to pursue a preliminary examination against the Firm on the allegations that the Firm determined the resale prices of its sellers and shared the commercial information of Türk Philips, which is active in the same market as the Firm. Accordingly, the case-handlers have arrived at the premises of the Firm in order to carry out an on-site inspection on January 7, 2020.

According to the Decision, the case-handlers have entered the undertaking's premises at 10:37 local time and submitted their authorization letter along with their personnel identities. Following their entrance, the case-handlers provided the General Manager with a list of the employees, who will be taken under the examination, also requested these employees to be warned not to leave the premises of the undertaking without formerly informing. However, upon the examination of the entrance system, it has been noticed that three employees have left the premises due to their pre-organized meetings. Nevertheless, the TCA was able to inspect the e-mail services with a tool enabling a remote inspection.

At 12:20 local time, the case-handlers have requested to access the e-mail messages of the former General Manager of the Firm, who was occupied as Senior Vice President Eurasia in France at the time of the on-site inspection. In five minutes, the HR Director of the Firm was able to direct this request to France. And within a short instance, a reply was received, explaining that the issue will be thoroughly examined in respect of whether it is technically possible to access the previous General Manager's e-mails.

At 16:08 local time, an e-mail was received explaining that the requested e-mails cannot be reached since the Vice President isn't currently occupied in its position in Istanbul and adding that, it is not "technically" possible to access the mailbox in accordance with the corporate standards and legal regulations. The HR Director of the Firm also expressed that the case-handlers' request of access cannot be satisfied on the grounds that subjected e-mails are protected within the scope of the General Data Protection Law enforced by the European Commission.

On the other hand, the case-handlers propelled that the requested e-mail correspondences cannot be considered as personal data as they are related to his/her duties during the period of occupation. The request of the case handlers has been conveyed through the phone and e-mail messages, however neither positive nor negative response was received. All in all, the e-mail services of the former General Manager were not still accessible at 21:30 local time, when the case-handlers have drafted and signed the "Minutes for Hindering the On-Site Inspection".

How Did the TCA Assess the "One Day Delay" in the Inspection?

According to Article 15 of the Turkish Competition Act, the Board is entitled to perform examinations, wherein the case handlers can examine the books and all kinds of documents; request written or oral statements; perform on-site investigations on the premisses and the assets of the undertaking. Article 15 has been amended those documents kept electronically and on information systems are included to the scope of the investigation of the TCA, which was essentially the case in practice prior to the amendments. Accordingly, the Board has published its Guidelines on the Examination of Digital Data during On-Site Inspections4 in order to determine the rules and principles regarding the inspections when the digital data is in question.

Hence, the Board imposed an administrative fine amounting to the 0.5% of the Firm's annual turnover.

2021: A Year Full of Action with On-Site Inspections

When we examine the Board's precedent on this subject matter, in its Çiçeksepeti decision7, the case-handlers detected that, employees have deleted their Whatsapp messages on contrary to the case-handlers' warning at the beginning of the inspection. Similarly, in the Savola decision8, the experts have detected that, certain employees have deleted their e-mail messages as the quantity of the e-mail messages at the beginning of the inspection had reduced during the inspection. Moreover, in P&G decision9, the Board have imposed fines on the undertaking on the basis of complicating the on-site inspection although the representatives of the undertaking have objected to the fine by claiming that some messages include "obscene" content belonging to the personal life.

In its Sahibinden decision10, the Authority has demanded the expert witness report of the Information Technologies Department within the Authority in order to determine whether the (i) the log record and (ii) the appearance of the "Messages and calls are end-to-end encrypted" text in Whatsapp prove the hindering of the on-site inspection. As the Department's tests resulted in affirmative, the Board has imposed fines on the undertaking. In the Medicana decision11, the case-handlers reported that the General Manager refrained from handing over his phone, and when the phone was delivered, there were deleted messages, which were "assumed" to be deleted in the time period when the General Manager left the room to take his phone, which was in the car at that time.

In the N11 decision12, the Board has detected that the employees have deleted their Whatsapp messages upon the suspicion that has risen by finding certain messages containing expressions such as "Should we delete this?", or "There are so many things to delete", or "I'm deleting but you are writing constantly". All in all, the experts were able to recover the data through digital forensic devices. Furthermore, in its Fatih Römorkçuluk decision13, the case-handlers have realized that the messages were deleted as the key word search on "Atlantic" didn't suspiciously hit any results. Lastly, in the Pasifik decision14, the Board concluded for an administrative fine as it was detected that e-mail messages have been deleted, although the attorney of the undertaking has claimed that the messages can never technically be deleted due to the "in-placehold" feature integrated to the Office 365.

In 2021, the Eti decision15, the Istanbul Gübre16 decision and the Unmas decision17 have been among the decisions given on the basis of hindering and complicating the on-site inspection, which we had previously provided our thorough analysis18.

In light of the given decisions, it is clearly seen that 2021 has been an active year for on-site inspections conducted by the TCA and we evaluate that the TCA will continue its inspections in 2022 at full speed. In these days when the Authority gives such importance and spares its resources to on-site inspections, it is of great importance that the undertakings are prepared for inspections in advance. When we examine the decisions, we consider that the competition law and on-site inspection trainings to be given to employees may reduce the risk of non-compliance to the procedures during on-site inspections. However, the companies' check list of preparation for the inspections is not limited to providing the necessary trainings, we assess that establishment of fast and effective procedures in terms of accessing the data may also save the day. In this respect, as the Decision clearly demonstrates, an effective method designed to reach the e-mails of the former employees can be one solution to protect the undertaking from being sanctioned by 0.5% of its annual turnover.

5. The Report can be accessed at the following link: https://www.rekabet.gov.tr/Dosya/geneldosya/faaliyetraporu2021-pdf

18. The blog article can be accessed at the following link: https://www.rekabetregulasyon.com/bir-sabah-ansizin-gelebilirim-yerinde-incelemelerde-hareketli-gunler-yasaniyor/