Much like the cogs in a wheel, enforcement and judicial review are the most essential elements for a healthy system of checks and balances. In an efficient and functional regulatory system, we need enforcement and judicial review to be interoperable in a balanced and harmonized manner. This is particularly important for interdisciplinary practice areas such as competition law.

When we assess the Turkish competition law practice from this perspective, we see that the enforcement side had a rapid development ever since it hit the ground running in 1997. Traditionally, the TCA has published its reasoned decisions, which provide detailed and practical guide to legal practitioners, scholars, and stakeholders of the relevant market. For years, this practice has significantly helped the improvement of competition law in Turkey.

Parties may initiate the judicial review procedure by filing a cancellation lawsuit. That said, decisions of the TCA are rarely canceled as a result of the judicial review, and the number of cases won before the courts are extremely low. Unlike the TCA decisions, the court rulings in such lawsuits lack reasoning and explanations on the rationale of the verdict. In the absence of any antitrust-specialized courts, the of administrative courts refrain from providing detailed assessments and only restate the legislation.

Upon recognizing the significant need for development in this area, we have been investing considerable time and effort into raising awareness on critical issues such as the standard of proof, the right to be heard, or the right to defense concerning judicial review of the TCA decisions. After years of advocacy and thought leadership on these issues, our efforts have finally given their due, and our team has secured a landmark decision vis-à-vis the High Council of State's ("CoS") 13th Chamber1.

Background of the Decision

In 2018, the TCA initiated an investigation concerning Henkel has been engaged in any resale price maintenance ("RPM") practices. The scope of the investigation covered beauty and personal care products, along with laundry and home care products. Monitoring resale activities and prices, conducting site visits, collecting information on the details of insert prices and the display conditions, and interfering with the resellers that sell the products at a price lower than the recommended price were among the allegations that shaped the investigation.

In an effort to get the lay of the land, the TCA conducted interviews with the retailers that are Henkel's customers and asked them whether the supplier engages in any sort of RPM. In response, the 20+ retailers have consistently stated that the supplier "does not intervene with the prices" and that the expressions in the correspondence in question "do not go beyond merely expressing its views regarding the prices". Some customers even stated that it is "impossible" for the supplier in question to make such an intervention, and they pointed that if such a request is made or even implied to them, they will do the exact opposite. In addition, all of the interviewed retailers emphasized that they set their prices in line with the current economic conditions. 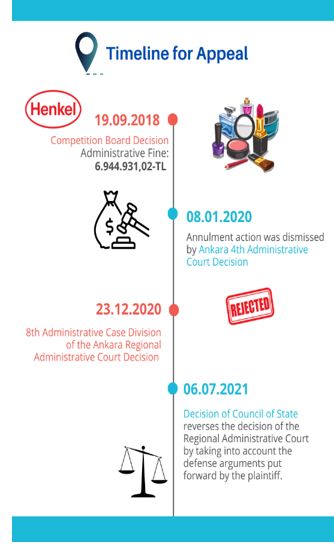 The retailers' statements seemingly cleared the air for any suspected RPM practices, and the rapporteurs concluded that there is no violation in their final report. However, the Turkish Competition Board decided that Henkel violated and imposed a hefty administrative fine due to RPM practices2. Upon the final decision, the fined supplier filed an annulment action against the aforementioned fine, which was dismissed by the court of the first instance and the Regional Administrative Court, respectively. After passing through the first two phases of the judcial review process, the case was reviewed by the appeal court for the TCA decisions, 13th Chamber of the CoS, which reversed and nullified the TCA's fining decision. In its reasoning, the CoS provides a groundbreaking assessment that touches upon the standard of proof in competition law and RPM practices. Echoing the long-fought arguments of the fined undertaking, the CoS decision emerged as a revolutionizing precedent that may yet be the beginning of a new era in judicial review.

Assessment of the RPM Practice

By definition, resale price maintenance ("RPM") stands for the particular type of vertical restraint, where an upstream firm controls or restricts the price (or sometimes the terms and conditions) at which a downstream firm can sell its product or service, usually to final consumers3. The core rule regarding the RPM practices within the framework of the Turkish Competition Law is that the supplier is prohibited from interfering with its customers' freedom to determine their resale prices. Akin to the rules in the European Union, it is also forbidden to dictate and/or monitor, directly or indirectly, fixed or minimum sales prices for customers.

In the last couple of years, we see that the TCA has adopted a strict enforcement trend concerning RPM practices4. Another point of observation is that in these cases, the TCA seemingly adopted a lower standard of proof in comparison to its European counterparts for establishing RPM violations5.

Challenging this status quo, the CoS sets forth higher standards for this type of violation through its reasoning. In its decision, the TCA makes a distinction between direct and indirect RPM behaviors. As the contracts between the supplier and the retailers do not contain a direct RPM clause, the assessment focuses on indirect and behavioral RPM practices. By reference to the TCA's guidelines, the CoS provides that the key factors for the authority to establish such RPM practice are the "pressure" and "incentive". In other words, the CoS provides that in an RPM practice, the supplier must be pressuring the retailers or providing them additional incentives to make sure that its resale prices are enforced. The CoS exemplifies such approach as granting additional discounts to retailers as they comply with the recommended prices or delaying, suspending, and terminating deliveries if the retailers fail to comply with the recommended prices.

Assessing the findings in the case with the preceding principles, the CoS concludes that Henkel's behaviors do not reach up to the point of intervention with the resale prices, and the comments to the retailers do not go beyond some sort of a "reprimand" by the supplier. Against this backdrop, the CoS provides that the TCA has not established that the supplier's actions constitute a clear case of RPM as defined in the Guidelines.

Furthermore, the CoS also considers the interview records in the case file, where retailers consistently state that the supplier "doesn't even make any statements that can be perceived as intervention". In refutation of the TCA's conclusion, the CoS provides that "it is not clear" whether the pricing behavior of the retailers has been impacted by the actions of the supplier.

Assessment of the Market Conditions

Taking its gloves off, the CoS also delves into the economic characteristics of the relevant market and assesses its impact on the alleged violations. Accordingly, the CoS provides that the case contain retailers with high-scale and volume, which carry a significant power in the market.

The CoS also provides that the supplier faces competition, and there are several large international competitors in the market. Another reflection is that there is a strong substitutability among different brands and the consumer preferences are price sensitive. Accordingly, the market share of undertakings in the market usually does not exceed 20-25%.

Against this backdrop, the CoS provides that market conditions make it difficult for a supplier to determine and maintain the resale price. As per the activities for collecting information on the market price of its products, the CoS reasons that the collection of this information for the planning of its own commercial and promotional activities cannot be considered as an act against competition law on its own

Assessment of the Standard of Proof

Another critical point of assessment in the CoS decision is the standard of proof. Adopting a rigid yet fair approach towards this issue, the CoS laid down a foundation for establishing competition law violations. 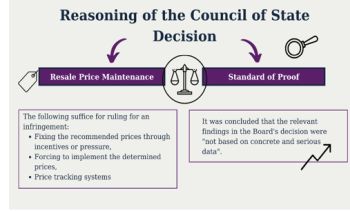 Accordingly, the CoS provided that the TCA should assess whether the individual findings, such as written correspondences, actually reflect a widespread RPM practice or not. The underlying rationale here is that isolated and individual findings should not be sufficient to establish the existence of a violation, and other factors such as the market conditions of feedback from the market players should be taken into consideration as well.

The CoS also stated that the TCA has not proven that the supplier has interfered with the resale prices. Taking into consideration the contradicting statements by the retailers, the CoS reasoned that it is not clear whether the pricing behavior of the retailers is impacted by the supplier's alleged RPM practice. Highlighting the need for conducting a case-by-case basis assessment, the CoS also stated that the pressure and incentive elements stipulated in the Guidelines should be present to establish an RPM type of infringement.

Accordingly, the CoS concluded that the TCA's decision findings were "not based on concrete and serious data". The assessment of the CoS not only provides insights on the standard of proof but also establishes its view on the binding nature of the TCA's Guidelines. The CoS follows the principles provided in the Guidelines in its reasoning and considers it a general procedural, administrative rule (genel düzenleyici idari işlem). The Guidelines define the boundaries of the authority vested in the TCA, the CoS decision confirms that these boundaries should be followed impartially and consistently.

In light of the preceding, the CoS determined that "the alleged violations could not be proven within the framework of clear and concrete data and assessments" and concluded that the TCA's decision was "not compatible with the law".

Judicial review of the TCA decisions plays an essential role in the development of competition law practices. Efficient use of judicial review serves as a balancing factor for the enforcement actions and provides a harmonized decisional practice. Ironing out the errors that may occur in the enforcement process, efficient judicial review will also help ensure the implementation of Constitutional principles in administrative actions.

In its decision, the CoS has deviated from the long-standing deficiencies of the judicial review in Turkish competition enforcement and delved into a detailed assessment on how to evaluate RPM practices, standard of proof, legal and economic factors to be considered, along with practical guidance on how to implement the stipulations laid in down the secondary legislation.

Providing thorough reasoning for its conclusion, the CoS decision sets itself apart from the general practice. Another benefit in this decision is that it assesses the economic factors surrounding the allegations and the relevant market, which has been long refrained during the judicial review process.

Clarifying the binding nature of the Guidelines and setting up a perimeter for the suppliers' ability to track market information without engaging in any RPM practice are also among the upsides of the said decisions.

On a last note, while the CoS applies a well-substantiated rule of reason assessment throughout the decision, we see that it also refers to RPM as by object restriction. The way we read this is that the "by object restriction" approach should be limited with direct RPM practices, where the contract between the supplier and the reseller contains an RPM clause. Hence, although we welcome this decision with all of the progressive features evaluated above, we think this point needs further clarification.

We take pride in representing firm throughout this lawsuit and contributing to the development of judicial review in Turkey through this revolutionizing precedent. Rendered by the highest administrative, judicial authority in our jurisdiction, we believe the results of this jurisprudence will help to shape the competition law practice for the better. Further details on the decision may be obtained from the round table discussions by clicking here.