Google was hit by another strike following the European Commission's €4.3 billion record fine. This time, the Turkish Competition Authority (TCA)—which previously resisted further investigating its mobile operating system practices in 2015—turned around and decided that Google had abused its dominant position in the licensable smart mobile operating systems market through its practices in the relevant market and other related markets such as the search and app store services markets. Accordingly, the TCA fined Google approx. €15 million and demanded that Google change its current relationship with the manufacturers. 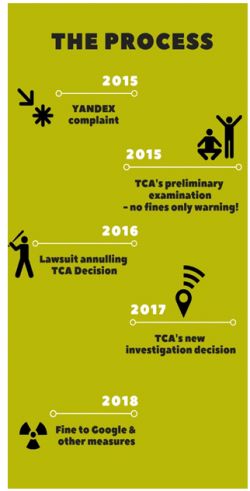 Why did the TCA change its mind?

Yandex, as the provider of search and information services as well as mobile applications in Turkey and across Eurasia, brought a complaint in 2015 in relation to some of Google's agreements and compliance programs, which restrict mobile phone manufacturers from using alternative mobile operating systems and enforce the use of other Google products, such as the search and app services. The TCA, requesting certain amendments to Google's agreements with the manufacturers, resolved that launching an investigation was not necessary at the time.

During this time, things became rather complicated for Google as it faced multiple investigations by various competition authorities around the world—including the European Commission. Following the Commission, the TCA decided that certain Google acts relating to mobile operating systems violated competition rules.

So, what's this hassle all about and, overall, how does the TCA evaluate Google's acts?

It is no surprise that Google makes the majority of its revenues from its flagship product – the search engine. A great proportion of Google's search engine related revenues consists of traffic achieved through its online (more specifically mobile) advertising products, such as Google AdWords, AdSense and Adx. Data acquired through such traffic works to Google's advantage, allowing it to use the data collected to leverage growth throughout the entire business and build consumer motivation. Moreover, Google comes forth as the (almost) only licensable smart mobile operating systems provider.

In its decision, the TCA further investigates Google's business model dependent on search based and non-search based online (and more specifically mobile) advertising products. The TCA evaluates that Google is enforcing its strength and advantage in the general internet search services market in its other mobile-based businesses by setting Google's search tools (i.e. Google Webview, Google Search, Google Chrome) as default tools, integrating them to the home screen of mobile products and requiring exclusive pre-instalment of its relevant apps on mobile devices.

Within the scope of Google's practices related to licensable smart mobile operating systems, the TCA evaluates that the Open Source Android created by Google back in the day to welcome all players in the market does not meet up with today's consumer trends and commercial requirements. This is because Open Source Android used today fails to provide crucial on-demand features such as app stores and application programing interface. Accordingly, the manufacturers have to pick one of the following (the latter being an impractical option for reasons explained) in order to meet consumer demand and make money: 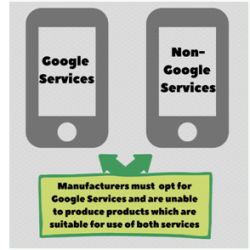 In the decision, it is evaluated that this alternative is mainly applicable for platform restricting countries such as China—where Google is banned—and this is not applicable in Turkey. Indeed, even if the option was applicable in Turkey, it is argued that it would fail to work in an effective manner and meet consumer demand.

Moreover, supported by the information provided by third parties such as mobile phone manufacturers, other product manufacturers and telecom operators, it is analyzed that Google appears to be the only platform providing app stores. Indeed, it is observed that the closest alternative to Google Play Store is Amazon's store. Accordingly, based on third-party submissions, it is evaluated that Amazon is not a strong competitor against Google because of the two following reasons: 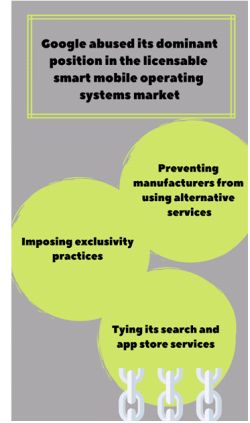 And the result is...

The TCA concludes that Google holds a dominant position in the licensable smart mobile operating systems market and evaluates that it abuses its dominant position in the relevant market by way of tying its search and app store services, imposing exclusivity practices on such and also preventing manufacturers from using alternative services to that end. Accordingly, whilst imposing a considerable amount of fine, the TCA demands Google change pre-instalment and exclusivity terms available in its manufacturer contracts and add an explicit statement allowing competing apps in addition to the Google app store.