Turkey: A Snapshot Of Turkish Merger Control In 2018

Recently, Turkish Competition Authority ("TCA") published its Annual Report ("the Report") for 2018. The report provides a broad range of statistics related to TCA's activities in 2018 as well as an overview of the competition policy in Turkey. In this article, we will provide an overview of M&As in 2018 and highlight the key transactions that are evaluated by TCA in 2018 in the light of the Report. 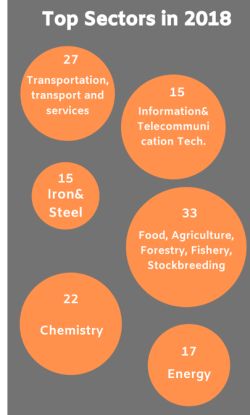 To start with an overview of M&As in 2018, TCA concluded the analysis of 223 notification including 2 mergers, 152 acquisitions, 56 joint ventures and 13 privatization.. According to report, the undertakings concerned were mainly operating in; food, agriculture, forestry, fishery and stockbreeding; transportation, transport and services; chemistry and energy. The transactions in these sectors adds up to 44% of the transactions evaluated by TCA in 2018. Following these sectors, the IT & communications technology and iron steel and other metals sectors had a significant transaction traffic with 15 transactions each. Four of these transactions were taken under phase II analysis due to competitive concerns.

Let's dig into top transactions in 2018.

The TCA assessed the acquisition of Monsanto by Bayer under Phase II Investigation. Operations of the undertakings concerned were overlapping in the vegetable seeds, cottonseeds and herbicide markets horizontally and in the corn-seeds market vertically. Therefore TCA focused on analyzing competitive concerns in these markets.

In respect of horizontal overlaps, TCA concluded that the transaction would give rise to a dominant position in the cottonseeds and vegetable seeds markets. However, Bayer committed to transfer its operations in the vegetable and cottonseeds market to an undertaking which would have a competitive power in the relevant markets. Indeed, Bayer had already transferred its operations to BASF in line with its commitments to European Commission ("EC") at the time of TCA's analysis. Therefore, TCA's competitive concerns were eased with commitments regarding the cottonseeds and vegetable seeds market. TCA also assessed undertakings' operations, which overlapped in the herbicide market and concluded that the combined market share of undertakings was under 20% which does not exceed the threshold indicated in the guidelines of TCA. As a result, TCA concluded that the transaction would not give rise to horizontal competitive concerns with proposed commitments in the market.

Moving on to another worldwide transaction which was subject to merger control reviews in 20 different jurisdictions including Turkey as well as Brazil, China, Colombia, the US and the EU. The transaction concerned the formation of a joint venture, namely Essilor Luxottica, by the merger of Luxottica and Essilor which would eventually operate in the branded sunglasses/frames and ophthalmic lenses markets.

The TCA analyzed that the transaction would create competitive concerns since there was a horizontal overlap in the branded sunglasses and frames market which also had conglomerate effects. The TCA evaluated that the merged undertaking would strengthen the dominant position of Luxottica in the branded sunglasses market in the absence of countervailing buyer power and effective market entries. It also stressed that the transaction would have conglomerate effects since the merged entity would be able to provide nearly all the products of opticians, namely branded sunglasses/frames as well as ophthalmic lenses.

In order to eliminate competitive concerns arising from the transaction, the parties proposed both behavioral and structural remedies to TCA. Accordingly, structural remedies included the divestiture of Merve Optik which is one of the main subsidiary of Essilor as well as the termination of distribution relationship with Marcolin. Behavioral remedies included refraining from tying products which would create conglomerated effects as well as imposing exclusivity or non – compete obligations to opticians for a period of three years. As a result, TCA cleared the transaction with the proposed remedies which will be subject to review after the three year period for a potential extension.

Acquisition of Mardaş by Arkas

Mardaş is one of the three container terminals in the Ambarlı Port Facility located in the Northwest of Marmara Sea. The transaction concerned the acquisition of Mardaş Port by Arkas, which jointly operates another port in the relevant region namely, Marport.

In its analysis, TCA mainly focused on container handling services market since there are only four port operators and post-transaction MSC and Arkas would control three of them. Therefore, TCA concluded that the transaction would constitute a joint dominant position in the relevant market, which would also create coordinated concerns. In order to remedy TCA's competitive concerns, Arkas proposed solely behavioral remedies that can be labeled as operational and legal diversification of operations. Accordingly, Arkas committed to appointing different board members and executives for each undertaking, separate facilities and vehicles, employment of different employees for legal and accounting departments of undertakings.

TCA also raised concerns related to potential discrimination and input restrictions that may arise due to the vertically integrated structure of Arkas. In order to eliminate such competitive concerns, Arkas committed not to amend the tariff and contract terms applied to current customers in 36 months and continue to offer berh/landing, port usage and operational services at the same standards with a non – discriminatory manner.

As a result, TCA cleared the transaction in 2018. However, in 2019 the Administrative Court suspended the execution of the decision. The reason underlying the Court's decision was that the behavioral remedies were insufficient to eliminate competitive concerns which would be created post transaction. However, before the Court's decision parties presented a document to TCA indicating that transaction would not be completed due to dispute over commercial terms.

In 2014 Lesaffre et Compaigne notified the TCA in order to acquire the sole control of Dosu Maya that operates in the yeast sector and merge it with its subsidiary Özmaya. Subsequent to Phase II investigation and with the commitments of Lesaffre, TCA cleared the transaction. However, an action was brought for the annulment of the TCA's clearance of Lesaffre – Dosu Maya transaction. The administrative court annulled the TCA's decision in 2017 and the Regional Administrative Court and Council of State approved the administrative courts' decision during 2018.

On the other hand, TCA launched a second Phase II investigation regarding the transaction in 2018. In line with the first clearance, TCA evaluated the market shares, entry barriers, distribution and sale channels, products' characteristics, potential buyer power and concluded that the transaction would give rise to competitive concerns in the fresh yeast market since the market is a tight oligopolistic market. In order to eliminate competitive concerns, Lesaffre mainly proposed to extend the duration of existing commitments that were accepted by TCA back in 2014. Lesaffre's commitments included not to vertically integrate its business through distribution channels, exclude all the exclusivity and non – compete clauses in its contracts, apply bound tariffs for its products. Once again, TCA cleared the transaction with the extended commitments in 2018.