Turkish Competition Authority (TCA) recently published its investigation decision 1 on the ro-ro shipping lines that have been carrying wheeled and mobile cargo between Ambarli - Topcular and Ambarli – Bandirma. These ro-ro lines in the main industrial zone of Turkey are getting more traffic, especially after the opening of the third bridge in the Bosphorus in 2016. The TCA examined the price-fixing agreement allegations among the ro-ro shipping lines that have operations in this crucial route for transporters. Furthermore, one of the investigated parties applied for leniency during the investigation and benefitted from a 50% reduction in fines.

Background Information on the TCA's Investigation

The TCA initiated an investigation based on the allegations about a price fixing agreement among three ro-ro companies (namely Tramola, İstanbullines, and Kale) in Ambarli – Bandirma line, and also a price fixing agreement between two undertakings (namely IDO and IDN) in ro-ro lines between Ambarli and Topcular. The duration of agreement on shipping tariffs lasted for more than eight years in the first line while it continued for four months in the second line. During the investigation period, the TCA conducted dawn-raids on the premises of all investigated parties and had significant correspondences that revealed the cooperation on shipping tariffs. Moreover, the TCA strengthened its findings with the market figures that indicated the collaboration among the parties for a long time in the logistically significant ro-ro lines of the Marmara region. Nevertheless, most importantly, the TCA benefitted from the correspondences and explanations provided in a leniency application of Kale, which is one of the investigated parties and has operations in Ambarli – Bandirma line since 2006. In this regard, initially, it would be beneficial to explain the leniency procedure in Turkey briefly. 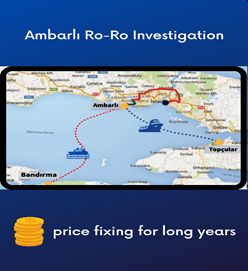 The Regulation on Active Cooperation for Detecting Cartels (Leniency Regulation) came into force on February 15th, 2009, and specifies the rules about the leniency mechanism 2. Accordingly, immunity may only be granted to the first applicant, which informs the TCA of a cartel and provides evidence that enables the TCA to conduct an inspection or prove the cartel infringement. To obtain immunity, the application must be submitted before the notification of the investigation report.

Applicants who do not qualify for immunity may benefit from a reduction of fines if they provide evidence. A higher reduction will be granted to the first and second leniency applicants.

When determining whether an applicant qualifies for immunity or a reduction in fines, factors such as the quality, efficiency, and timing of the applicant's cooperation, as well as explicit demonstration of evidence of a violation, are taken into consideration. Accordingly, such determination is at the discretion of the TCA.

The TCA has sole discretion when assessing whether or not the information submitted with the leniency application is "essential" to the investigation. Accordingly, if the information provided is not deemed to have been "essential" to the investigation or has already been obtained by the TCA, an applicant will at most benefit from a reduction in fines.

When considering the leniency practice in Turkey to date, we have seen that the TCA examined around 24 leniency applications, and approximately 25% of the applicants benefitted from immunity in different markets, including banking, airlines, and yeast 3.

In its application and during the meeting with the case handlers of the investigation, Kale provided valuable information on the cartel agreement and organization among Tramola, İstanbullines, and Kale that have ro-ro line operations between Ambarli and Bandirma. The leniency application did not provide any information on the second ro – ro line between Ambarli and Topcular. The main arguments of the leniency application can be summarized as below: 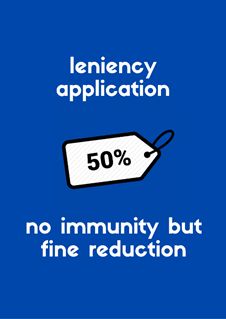 Since Kale informed the TCA on the duration of the cartel, essential dates, and locations related to the cartel organization with pertinent information and documents, the TCA defined them as critical or essential for the scope of the investigation and gave a 50% reduction to Kale.

As a result of the investigation, the TCA stated that Tramola, İstanbullines, and Kale agreed on the transportation tariffs in Ambarli – Bandirma ro ro lines for around eight years. Kale as a leniency applicant benefitted from a reduction, and the TCA imposed an administrative fine of 0.8% of the turnover of Kale. In contrast, the Competition Board imposed 4% fine to the other investigated parties, Tramola and İstanbullines. On the other hand, since the duration of price fixing agreement was shorter (around four months) in Ambarli – Topcular ro-ro line, the TCA imposed a 0.8% fine for IDO and IDN.

2 Additionally, the TCA published the Guidelines on the Explanation of the Regulation on Active Cooperation for Detecting Cartels on 17 April 2013.