Turkey: Roche Is Absolved From The Long-Standing Investigation

Background of the Case

Nine years ago, Corena, a pharmaceutical warehouse, lodged a complaint about Roche on the basis that the distribution agreement of Roche which includes an export ban for the warehouses violates the Article 4 of the Law No: 4054 ("Competition Code"). In addition, it is also alleged that Roche had forced the wholesalers not to provide Roche branded products to Corena.

Therefore, in the preliminary investigation, the Board mainly examined the following allegations:

Pursuant to its examination, the Board concluded that the export ban does not fall within the scope of the Competition Code as it does not have any effect on the Turkish market. Moreover, the Board determined that there is not any sufficient evidence to initiate an investigation against Roche in line with the second allegation. It also stated that it is not possible to associate the export ban with the existence of wholesaler' refusal to deal with Corena.

Upon Corena's appeal, the Council of State reviewed the case and concluded that the Board has not sufficiently examined the evidence in its preliminary investigation. The Council of State also stated that the indirect export ban should have an impact on the Turkish Market. Pursuant to annulment decision, the Turkish Competition Authority ("TCA") decided to initiate a full-fledged investigation.

Recently, the long-standing process finally came to an end and the Board published its reasoned decision regarding the investigation. The decision creates a significant precedent as it demonstrates the final position of the TCA towards the application of export ban which is a quite hot topic nowadays in the pharmaceutical sector.

Before digging into the decision, it is worth to mention that Roche was not the first undertaking in the sector that the TCA examined its export ban provisions. Therefore, initially, we will briefly summarize the TCA's previous decisions regarding the export ban issues within the pharmaceutical industry. Then, we will clarify the TCA's recent position in the Roche decision.

Parallel export from past to today

Within the last ten years, the Board ruled several important decisions which strive to address the exportation issue in the pharmaceutical industry.

As the pharmaceutical industry is strictly regulated in Turkey and the prices in the industry are determined by the government, Turkish markets ended up having eminently cheap products when compared to foreign markets. This led to an increase in the export of the products.

As exports reduce the motivation of the manufacturers to conduct R&D activities which is a highly costly activity that can only be realized if there is a forecasted gain, TCA takes a positive approach towards export limitations.

As previously mentioned, TCA holds the position that the export ban does not fall into the jurisdictional scope of the Competition Code since it has no effect in the Turkish market. Similar analyses on export limitation can also be found in the Novo Nordisk1 and Takeda2 decisions of the TCA as well.

At this point, it should be noted that although the TCA has a positive approach towards the export limitations, as it can be clearly seen from the Board decisions export ban is not sufficient to provide control over the distribution of the pharmaceutical products and manufacturers has been striving to find an additional solution to combat with the unrestrained export. 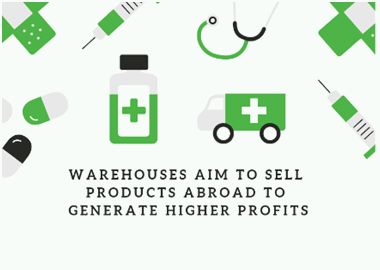 In this respect, the Board has also closed the doors for selective distribution system which could be an alternative solution. In the Pfizer3  decision, the Board concluded that the warehouses finance the pharmacies for them to maintain the availability of products in the market, thus limiting the number of warehouses will have a significant impact on the competitive nature of the distribution market.

Finally, the recent Roche decision includes significant evaluations which demonstrate the final position of the TCA regarding export ban or alternative solutions for combating against parallel exportation in the pharmaceutical sector.

What does Roche decision say?

In its reasoned decision, the Board makes significant evaluations regarding export ban applications. It states that the warehouses have no intention to contribute the customer welfare and parallel exportation will only serve the warehouses which are now more than 85.

Moreover, it is also observed that the preservation of the parallel exportation will increase the competition among the pharmaceutical warehouses and the customers will benefit from the enhanced service quality.

In this respect, we may conclude that unlike the Pfizer decision, the Board handles the issue from a different viewpoint and it does not solely focus on the welfare of the warehouses.

In addition, the Board emphasized that the prevention of parallel exports is not only for the benefit of the pharmaceutical warehouses but also the public health.  Hence, the Board states that banning the export of pharmaceutical products is also compliant with the policies of the Ministry of Health.

It is also highlighted that there is no sufficient evidence which supports the allegation that Roche forced the warehouses to restrict supplies to Corena.

Therefore, it is observed that the Board is gradually changing its position regarding the competition among the warehouses and it starts giving positive signals that it may bring the welfare of the manufacturers in question as well.

In this respect, it remains to be seen whether the change in the attitude of the Board would go that far to leave room for more conventional mechanisms such as selective distribution systems.