Turkey: A Liberal Approach Towards Leniency Applications In Turkey

So far, an efficient leniency practice has been a remarkable policy objective for the Turkish Competition Authority (TCA). In the Strategic Plan1 issued in 2014, the TCA indicates that there are various obstacles towards the establishment of sufficient motive concerning leniency applications and detection of cartels. Regardless of the issues that were present at the time when the Strategic Plan was issued, the main objective of the TCA has always been to increase the efficiency of the leniency program by removing potential obstacles against it. The TCA took a major step towards one of the aforementioned obstacles nearly six months ago in its Syndicated Loan Decision,2 by adopting an approach on consideration of anti-competitive information exchanges within the scope of a leniency application, which most would define as liberal. Before moving on, a brief insight on the leniency program in Turkey would be useful to understand the changes introduced by the Syndicated Loan Decision.

A Bottleneck for Leniency Applicants 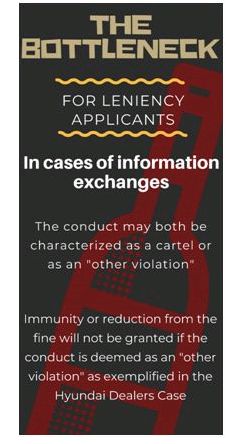 The Regulation on Active Cooperation for Detecting Cartels (Leniency Regulation) explicitly stipulates the conditions of being granted immunity from fines or reduction of the fines for the companies involved in a cartel3. Pursuant to the Leniency Regulation immunity from fines or reduction of fines, which the TCA would have otherwise imposed, could be granted if the company involved in a cartel meets the following criteria collectively:

Evidently, immunity from fines or reduction of fines are committed by the TCA if active cooperation materialized with the above-mentioned criteria is related with a cartel. Pursuant to the Regulation on Fines,4 the base fine for a violation of the Competition Act is calculated differently depending on how the violation is characterized. Accordingly, an agreement or a concerted practice restricting competition could be deemed either as a cartel or an "other violation".

Pursuant to both regulations, cartels are defined as "agreements restricting competition and/or concerted practices between competitors for fixing prices; allocation of customers, providers, territories or trade channels; restricting the amount of supply or imposing quotes, and bid rigging" creating a bottleneck for the potential leniency applicants involved in anti-competitive information exchanges. That is because, an anti-competitive information exchange could both be considered as a cartel or within the scope of "other violations" by the TCA.

The Syndicated Loan Decision, where TCA examines the information exchanges on prices, quantities, terms and status of participation to the corporate loan deals amongst 13 banks, represents a fine example of removing the bottleneck faced by potential leniency applicants. It is important to note that the investigation regarding the Syndicated Loan Decision has been launched by virtue of a leniency application of one of the investigated parties. 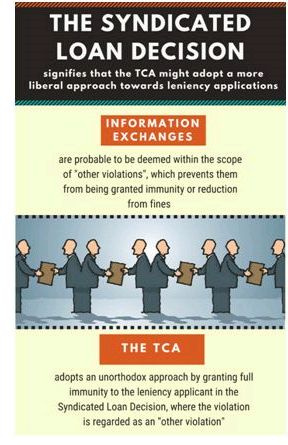 In the wake of the assessment made by the TCA on the findings obtained during the course of the investigation, it was concluded that few of the parties have exchanged information, which could be characterized as competitively sensitive. In the Syndicated Loan Decision, exchanges of information on price and quantity of production are considered to have a particular significance in competition law that renders such behavior (i.e. agreements and/or concerted practices) as restrictive by object. Nonetheless, the Guidelines on Horizontal Cooperation Agreements5 deem exchange of information on future prices or quantities as a behavior which most probably would lead to restriction of competition by object and normally would be regarded as a cartel, without requiring such behavior to be characterized as a cartel in all circumstances.

Surprisingly, in the Syndicated Loan Decision the TCA grants a full immunity to the leniency applicant, despite the fact that the conduct was not characterized as a cartel. This unorthodox approach was justified with article 16/6 of the Competition Act, which do not stipulate any requirement concerning the characterization of the conduct at stake for being granted leniency and allows for it if the active cooperation is present, by taking into several factors on cooperation and by means of demonstrating its grounds explicitly. While such approach evades the characterization requirement envisaged in the Leniency Regulation, it removes one of the most significant obstacles that a potential leniency applicant may face during the course of a case related with information exchange, namely the leniency cases where the conduct is within the scope of "other violations". In any event, the Syndicated Loan Decision is expected to have an influence on the oncoming investigations of the TCA, where there is a leniency application and the applicant could not be certain if the conduct is a cartel or not.