In Taiwan's patent and trademark law regimes, the doctrine of international exhaustion is still the benchmark for addressing issues of parallel imports, also called "water goods" ("水貨," meaning "goods from the waters") in the Chinese-speaking world, suggesting that the goods however "genuine" are imported through a troubled and unchecked route.

In patent lawsuits, the exhaustion doctrine operates as an affirmative defense. To succeed in this defense, defendants need to prove that the parallel imports first sold abroad are "manufactured by the patentee or under its consent." Article 59.1.6 of the Patent Law. Obviously, the term "patentee" here refers to the owner of a Taiwan patent.

However, for various reasons, sometimes corresponding patents are owned by different entities, a situation known as "split patenting." If parallel imports are manufactured in a foreign country by a company that owns the foreign corresponding patent but does not own the Taiwan patent, the parallel imports may not appear to be "manufactured by the [Taiwan] patentee or under its consent" from a literal reading of the law.

The trademark law version of this issue was carefully reviewed by the IP Court last year in Ohwin Inc. v. Infinity Beauty Ltd., 106 Xing Zhi Shang Yi 11 (Taiwan's IP Court, May 2020) ( see our report here). Striking a balance between all interests concerned, the court held that exhaustion takes place even if the Taiwan registration and the foreign registration are owned by different entities, provided that these entities hold "a licensing or legal relationship" and the parallel imports are perceived by consumers as coming from the same source.

Following the footsteps of Ohwin, the "licensing or legal relationship" test now comes to "test the waters" in patent law. In a recent IP Court decision on a parallel import dispute arising from split patenting, it is held that consent from the Taiwan patent's owner can be deducted if she holds a "licensing or legal relationship" with the foreign patent's owner, marking the very first debut of the test in patent case. Premium Water, Inc. v. Aqua Vita, Co., Ltd., 108 Min Zhuan Su 99, Taiwan's IP Court (December 2020). The judge (Judge Yi-Shen LIN) who penned this decision said:

Under the principle of extraterritoriality, patents issued in different countries on a same invention indeed give rise to independent patent rights, whether the second application is filed by the same applicant or an authorized party. However, as the claimed invention is the same and the exclusive rights originate from the same entities, owners of corresponding patents issued in different countries are still subject to the doctrine of patent exhaustion if they hold a certain licensing or legal relationship.

Yet the decision does not render an in-depth analysis on how to prove the existence and nature of a licensing or legal relationship. That is because Premium Water springs from a particular type of split patenting. In Premium Water, while the parallel imports sold abroad (in Japan) were manufactured by a third party who owns the corresponding Japan patent, this third party actually co-owns the Japan patent with the Taiwan patent's owner, as illustrated in the chart below. 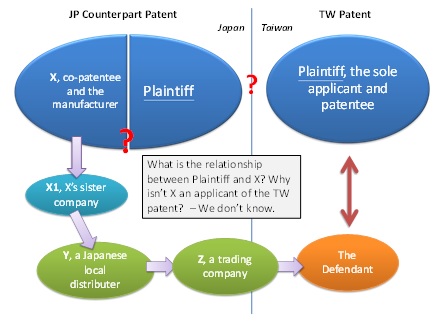 In the Judge's perspective, the formation of a patent co-ownership as such suggests an underlying "licensing or legal relationship" that warrants an (implicit) consent or licensing:

Given the fact that the plaintiff and X jointly own the Japanese invention patent, there must be an economic or legal relationship underlying their co-ownership. Considering the absence of any special agreement between them, it should be concluded that the plaintiff and X must have permitted or licensed each other to implement the invention patent.

It is noteworthy that, in Japan, as in Taiwan and many other jurisdictions, a co-owner may "work the patented invention without the consent of the other [co-owner(s)]," "unless otherwise agreed upon by a contract." Article 73.2 of Japan's Patent Act (2006). This fact was used by the plaintiff to support its claim that it never consented to the manufacture and sales of the disputed parallel imports. To put it simply, just because a co-owner obeys the law to tolerate another co-owner's activities does not mean she has given her consent. Further, the plaintiff stressed that they never received any reward from the first-sales which many believe is the cornerstone of the exhaustion doctrine (yet first-sale reward is not present in the text of Taiwan's Patent Law). Nevertheless, these arguments were found immaterial by the judge. It is not clear whether the plaintiff has appealed.

The patent in dispute is TW I412471 entitled "A Water Server Bottle" and claiming priority from Japan patent applications JP 20080269087 and JP 20080187700. As to the products in dispute, they are PET bottles containing water advertised to be sourced from Japan's Mount Fuji. When the water is let to flow out, the bottle having a bellows-shaped upper part is compressed down into an desired space-saving shape by atmospheric pressure.

ARTICLE TAGS
Taiwan Intellectual Property Licensing & Syndication Patent Trademark
POPULAR ARTICLES ON: Intellectual Property from Taiwan
Compulsory Licensing In India
Khurana and Khurana
WIPO defines patent as an exclusive right granted for an invention, which is a product or a process that provides, in general, a new way of doing something, or offers a new technical solution to a problem
Patent Law in India
Anand & Anand
The Patents Act 1970, along with the Patents Rules 1972, came into force on 20th April 1972, replacing the Indian Patents and Designs Act 1911. The Patents Act was largely based on the recommendations of the Ayyangar Committee Report headed by Justice N. Rajagopala Ayyangar. One of the recommendations was the allowance of only process patents with regard to inventions relating to drugs, medicines, food and chemicals.
All You Need To Know About "Well-Known Trademarks"
Khurana and Khurana
With coming up of the new Trade Mark Rules 2017, a new procedure has been created that allows the Registrar to proclaim a particular trademark as "well known".
Concept Of Fair Use And Fair Dealing In Copyright
Singh & Associates
Fair use supports "socially laudable purposes," typically, if not exclusively, involving the use of the copyrighted work by a second author
Patents Law In India - Everything You Must Know
Vaish Associates Advocates
The presentPatents Act, 1970 came into force in the year 1972, amending and consolidating the existing law relating to Patents in India
A Study On: Novartis AG v. Union Of India
Khurana and Khurana
Intellectual property is an intangible form of property while a ‘Patent' is a subset of intellectual property.
FREE News Alerts
Sign Up for our free News Alerts - All the latest articles on your chosen topics condensed into a free bi-weekly email.
Register For News Alerts
Article Tags
Taiwan Intellectual Property Licensing & Syndication Patent Trademark
Related Articles
Trademarks Comparative Guide Saint Island International Patent & Law Offices
Is Non-Profit Use Non-Trademark Use? Saint Island International Patent & Law Offices
Sanyu's Paintings Provide A Window Into Taiwan's Civil Lawsuits Saint Island International Patent & Law Offices
国際消尽適用に関する台湾裁判所の判例と傾向 Saint Island International Patent & Law Offices
Taiwan's First Court Decision On Patent Linkage Lawsuit Saint Island International Patent & Law Offices
Mondaq Webinars
Future Series: The Future of Employment Law in Canada - Current Trends and Predictions
CCPartners
Webinar Ontario Canada
How Executives Can Enhance Their IP Strategy and Performance in Switzerland
Swiss Business Hub UK + Ireland c/o Embassy of Switzerland
Webinar London UK
More Webinars
Comparative Guides
Cybersecurity
Data Privacy
Patents
Trademarks
Virtual Currencies
More Guides
Mondaq Advice Centres
Global
Trademarks in SAARC Countries
Global
Investment Immigration
More MACs
Upcoming Events
Mondaq Social Media