by Juanita Brockdorff , Adam Polacsik and Osarugue Obayuwana
KPMG Malta
Your LinkedIn Connections
with the authors

As you might be aware, Country by Country (CbC) Reporting is a recent tax compliance obligation that requires multinational enterprises to annually file a comprehensive group tax report to cover every jurisdiction where they do business. The report is designed to show global tax information of the multinational group and of its constituent member entities. CbC Reporting was introduced to Malta by L.N 400 of 2016, applicable from fiscal years commencing on or after 1 January 2016.

MNE groups must therefore be prepared to navigate the uncharted territory of increased tax transparency and sweeping global tax reforms.

By jurisdiction, MNEs must provide information on revenue, profit before income tax, and income tax paid and accrued in their CbC report. They also report their number of employees, stated capital, retained earnings, and tangible assets in each tax jurisdiction. Lastly, MNEs must identify each entity within the group doing business in a particular tax jurisdiction and provide an indication of the significant business activities each entity carries out. At the end of 2018, almost 90 countries had adopted or expressed their intent to adopt mandatory CbC reporting regulations.

The CbC report provides tax administrators with a wealth of previously unavailable data to scrutinize whether MNEs may be engaging in Base Erosion and/or Profit Shifting ('BEPS'), enabling tax administrators to identify audit targets more easily and effectively. At the same time, revenue authorities are increasing their collaboration and information sharing activities. In 2018, more than 1,700 bilateral exchange agreements had been activated among jurisdictions that adopted CbC requirements, and the first automatic exchange of CbC reports took place in June 2018. Additionally, to assist tax administrators in their review and analysis of CbC data, the OECD has published two handbooks1 that outline a broad array of potential risk indicators in CbC reports.

How to navigate treacherous waters

KPMG has recognised the increased risk that MNEs potentially face owing to the introduction of CbC Reporting regimes worldwide. To assist our clients, KPMG has developed two separate tools: the KPMG proprietary "CbC Risk Assessment"© and "CbC Benchmarking Services"© tools, which help the clients analyze their CbC reporting positions to identify potential risk areas by individual taxing jurisdiction, as well as advise them as to how their CbC Reporting positions compare to those of other groups.

KPMG "CbC Risk Assessment"© tool analyzes an MNE's CbC Reporting positions based on the risk criteria identified by the OECD, as well as other relevant factors, such as materiality risk (entity size within the observed tax jurisdiction relative to the MNE group and to the respective country's GDP) and tax authority risk factors (aggressiveness of a particular country's tax authority based on KPMG experience and the company's audit history). By pulling together the OECD's 19 risk factors and other relevant information, KPMG's risk assessment tool can help the MNE by providing a detailed view into its BEPS-related tax exposure from its CbC reporting positions and an overall risk rating for each country listed on its CbC report. This helps the MNE to understand where it might best focus its efforts to manage BEPS risk.

KPMG presents its findings through interactive data visualizations that effectively highlight an MNE's CbC risk, while providing the MNE with the ability to adjust weightings and explore impacts of such adjustments to its global CbC risk profile. 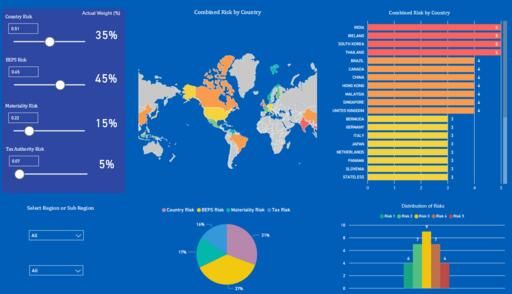 Relevant risk factors are incorporated into a single dashboard providing a detailed understating of an MNE's BEPS-related exposures.

Our Clients receive a table summarizing the specific risk factors or ratios driving the overall risk assessment for each jurisdiction.

Next steps for MNEs in the post-BEPS world

MNEs must prepare themselves for the uncharted territory of increased tax transparency and sweeping global tax reform. Analyzing their CbC reporting positions should be a first and most basic step in getting ready and analyzing the specific risk factors.

MNEs armed with information about the risks presented by their CbC reporting positions will be better equipped to determine whether their global value chains have been properly documented, whether they should consider restructuring to reduce the risk for potential controversy with tax administrators in this new post-BEPS world, or whether they should undertake other proactive risk-mitigation measures, such as entering into an advance pricing agreement.

For more information please reach out or send an email.