South Africa: A Sweet Solution To… What Exactly? 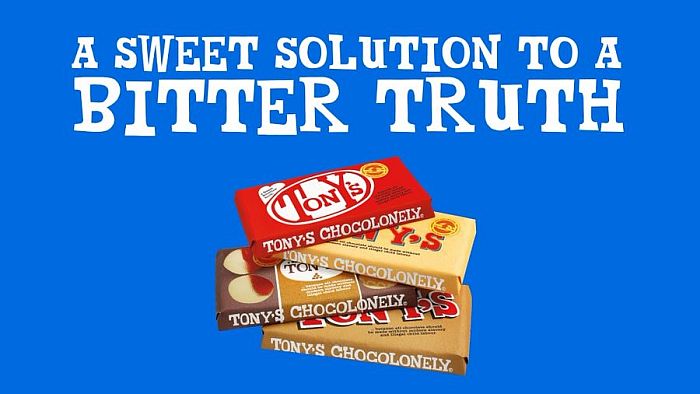 The shapes of the new products are what Tony's Chocolonely describes as "playful" but we suspect that the other companies might have a different expression for this. So, for example, the Kit Kat lookalike comprises a mix of the unequal shaped blocks used by Tony's and the wafer shapes of Kit Kat.

Tony's Chocolonely's plan was to launch this new range of chocolates in the UK, Netherlands, Belgium, Germany and the USA. But, claims the company, its competitors put serious pressure on the UK supermarkets not to stock these limited-edition bars. We don't have any information on how the launch has gone in the other countries. One report suggests that these bars are now only available on Tony's Chocolonely's website.

So, what are we to make of this? Seeking to end child labour, slavery and other abuses in the supply chain is, of course, totally laudable, but is it justifiable to use the branding of competitors in the process? Cynics might see this as little more than a ruse to increase revenue.

It is, in our view, highly unlikely that any of Tony's competitors will take the legal route. The simple fact is that any legal action would look bad given the anti-slavery/child labour dimension. But assuming we're wrong, what remedy would the law provide?

If this were to play out in South Africa, Tony's Chocolonely's competitors might well have a case, assuming that they had South African trade mark registrations for their labels, registrations that incorporate the colours. Trade mark infringement is dealt with in Section 34 of the South African Trade Marks Act. Section 34(1)(a) prohibits the "unauthorized use in the course of trade in relation to goods or services in respect of which the trade mark is registered, of an identical mark or of a mark so nearly resembling it as to be likely to deceive or cause confusion."

Even in cases where consumer confusion is unlikely to happen, there might still be a claim for infringement under section 34(1)(c), especially as the various chocolate getups are most certainly well known. This section deals with infringement through the use of a similar mark where the registered mark is well known and the use is likely to "take unfair advantage of, or be detrimental to, the distinctive character or the repute of the registered trade mark, notwithstanding the absence of confusion or deception." It's worth bearing in mind that the trade mark laws in most countries have provisions that are similar to these.

We suppose that one lesson to learn from this story is the importance of separately registering the product label, including in colour, as a trade mark, in addition to the word trade mark.

We'll end by mentioning that Tony's Chocolonely very recently discovered that taking the moral high ground is one thing, staying on it is another. The company has been dropped from the Slave-Free Chocolate's list of ethical chocolate companies. Tony's Chocolonely's website says this:

"We have never found an instance of modern slavery in our supply chain, however, we do not guarantee our chocolate is 100% slave free." It goes on to say that "we are doing everything we can to prevent slavery and child labour... [but] we cannot be there to monitor the cocoa plantations 24/7." But it is thinking big: "Our ambition extends beyond our own bar, we want to change the whole industry which involves being where the problems are so that we can solve them...only then can we say we have achieved our mission to make all chocolate 100% slave free."

ARTICLE TAGS
South Africa Intellectual Property Trademark
POPULAR ARTICLES ON: Intellectual Property from South Africa
A Guide To Trademark Registration In Nigeria
Benchmac & Ince
Nigeria is Africa's most populous nation with the largest economy in the continent and a fast-growing services sector with an increasing need for consumer goods.
Types Of Trademarks: All You Need To Know
Abou Naja
As industries race to gain a legal monopoly on their unique innovations through marks registration, we are inundated with an ever-increasing number of products with
Overview Of Copyright Law And Copyright Registration In Nigeria
Resolution Law Firm
The Copyright Act LFN 2004 is the principal law that governs, protects copyrights in Nigeria, while the regulatory agency that supervises copyright registration in Nigeria is the Nigerian Copyright Commission.
Procedure For Trademark Search And Online Registration In Nigeria
Resolution Law Firm
The trademark search is actually the first step for trademark registration in Nigeria.
An Overview Of Copyright Protection In Nigeria (Part 1)
AELEX
Copyright is a form of intellectual property. It has been defined by Black's Law Dictionary, 9th Edition as a right granted to the author or originator of certain literary or artistic productions...
The Defence Of Fair Dealing In Nigerian Copyright Law: Tradeoffs Between Owner And User
Johnson Bryant
The idea of copyright is indicative of two rights – the right of the copyright owner to enjoy the fruits of his labour on the one hand and right of the copyright user to benefit from the copyright work on the other hand.
FREE News Alerts
Sign Up for our free News Alerts - All the latest articles on your chosen topics condensed into a free bi-weekly email.
Register For News Alerts
Article Tags
South Africa Intellectual Property Trademark
Related Articles
The Story That Gripped The World ENSafrica
Virgin: The "Tarnishing" ENSafrica
Copyright Compendium ENSafrica
Elon Musk Doesn't Do Patents. Does That Matter? ENSafrica
The Trade Mark Dispute That Wouldn't Die A Quiet Death ENSafrica
Mondaq Webinars
Visas, Work Visas/ Residence Permits and Nigeria's New Visa Policy
Famsville Solicitors
Webinar Lagos Nigeria
Competition Law Compliance Programs and Trainings: Client Experiences and Notes for the Future
ELIG Gürkaynak Attorneys-at-Law
Webinar Istanbul Turkey
More Webinars
Comparative Guides
Labour and Employment
Private Equity
Mondaq Advice Centres
Global
Trademarks in SAARC Countries
Global
Investment Immigration
More MACs
Upcoming Events
Mondaq Social Media