by
PricewaterhouseCoopers
To print this article, all you need is to be registered or login on Mondaq.com.

Welcome to our fourth biannual PricewaterhouseCoopers Strategic and Emerging Issues in South African Insurance survey. This edition builds on our previous surveys, and our industry specialist group has ensured that the contents provide a comprehensive overview of the issues and challenges facing the industry today.

The South African insurance industry accounts for 71% of Africa's total premiums and has the third-highest insurance penetration, in the world (15.3%).

Looking ahead, the insurance industry can expect many more challenges, as economic conditions remain volatile, consumerism continues and the regulatory environment keeps evolving. New business growth prospects and the durability of existing policies continue to be adversely affected by reduced consumer discretionary income, high interest rate increases, increased energy costs and other inflationary pressures. The South African insurance industry faces unique challenges and it is important that it evaluates and adapts to the needs of the emerging market.

We are confident that this survey will help the industry achieve its goals and meet the challenges it faces. With the survey covering both long- and short-term insurers, we have been able to identify major trends, emerging issues and differences in opinions, all of which I'm sure you'll find useful benchmarks for your organisation.

The key objectives of this survey are to:

I would like to thank the executives who participated in the survey. We greatly appreciate their openness and the insight and vision they provide on key topics. I would also like to thank Dr Brian Metcalfe for the time and effort he put into producing this survey.

We trust you will find this survey thought provoking and insightful. If you would like to discuss any of the issues addressed in more detail, please speak with one of the contacts at PricewaterhouseCoopers or those listed at the end of the survey. We would also appreciate your feedback on the content of this survey, as this will help us to ensure that we are addressing the issues on which you are most focused.

This survey focuses on strategic and emerging issues in the South African insurance industry. This is the fourth survey of its type in the insurance market, although similar surveys have been published in the banking and insurance broking markets.

The survey attempts to provide an industry-wide perspective. However, where meaningful, it also reports differences between the short-term and long-term participants.

The survey is based on personal interviews with managing directors and senior executives in 30 companies. The list below shows 32 companies. This is because only one interview was conducted with both Hollard and Regent, each listed both under the short- and long-term insurance companies.

The interviews were approximately one hour in length and were conducted in Johannesburg and Cape Town during February and March 2010.

The report has been compiled from personal interviews with 30 managing directors and senior executives representing long-term and short-term insurers, re-insurers and cell captives.

The report seeks to identify emerging trends and strategic issues over the next three years.

Respondents feel the insurance industry had escaped the worst effects of the financial crisis. Investment performance was obviously affected, but the industry remains robust and confident.

Respondents acknowledged that there had been evidence of client attrition and cost control remains an ongoing concern.

However, the larger companies believed they had benefited from a flight to quality and had used this market uncertainty to strategically grow.

Participants believe that following the crisis they will devote more time to three areas; acquiring new clients, managing risk and holding on to existing clients.

Many insurance products have been commoditised and consumers continue to embrace direct marketing channels. This change was well underway at the time of the 2008 survey and it continues unabated. Indeed, the launch of direct channel initiatives by the large "traditional" insurers reflects the importance of this distribution method.

As consumer products become more commoditised and subject to intense promotion and aggressive pricing, low-cost distribution and efficient servicing will be critical.

Consumerism is being fuelled by Government initiatives such as the Consumer Protection Act and by consumers themselves as they are becoming more educated, self directed and confident. This movement is further facilitated by online access to competitive insurance offerings.

Responses from participants suggested that future consolidation would be low to moderate with most developments taking place at the lower end of the market.

However, just days after the research was completed, two of the participants in this report, Metropolitan and Momentum, agreed to merge their operations. This must have been a surprise to the industry participants because none had predicted a consolidation at this level.

Rise of the niche players

Although most short- and longterm companies continue to view the established broad-based institutions as their number one competitors, there is a growing awareness of niche players attacking specific parts of the market.

Participants had mixed views on the merits of a "one-stop shop" wealth model for consumers and this suggests that they endorse the "best of breed", which may originate with specialist niche players.

The three issues that senior executives found most pressing in 2010 were regulation, retaining customers and recruiting/training in the distribution channels.

Risk management and profit performance are also close to the top of a list of 48 issues identified. Accuracy of actuarial assumptions was identified as the most important rising issue.

Nine out of 12 different skill sets were considered difficult and if a black economic empowerment (BEE) factor was added to this rating, then some personnel functions become extremely difficult. At the top of the list in 2010 were IT, non-executive directors, actuarial skills and underwriting skills.

Although participants are expanding into Asia and South America, expansion into the rest of sub-Saharan Africa is also gaining traction. Many short-term and long-term companies have significant relationships in key African markets and it seems highly likely that this trend will continue to develop.

South African insurers have little interest in developed markets. Instead, they see opportunities to leverage their unique skill sets and expertise in other developing markets.

One problem going forward may be their ability to manage and control these diversifications and expansions. Given the HR problem mentioned above, it seems that management resources will be stretched as international networks grow.

Participants also indicated that they were interested in seeking strategic investors if it allowed them ready access to other markets particularly within Africa.

A total of 12 participants believe they will participate in significant M&A activity over the next five years and this may involve foreign participation.

Joint ventures and partnerships will be the key to future expansion strategies. While most companies are comfortable with their existing structure, nine companies admitted they needed to change.

Most respondents made reference to the reconfiguration of one reinsurer in South Africa to a branch status, but attributed the reasons for this to external factors. They contended that there had been little change in the reinsurance market, but noted the entrance of new reinsurers, including SCOR, Africa Re and Flagstone Re.

Almost three quarters of participants believe that regulation will "increase substantially" over the next three years. In the 2008 report, the National Credit Act was a primary concern. In 2010, there is concern over the implementation and alignment of the Consumer Protection Act.

There is also an acceptance that the Regulator will continue to monitor and impose new controls across different parts of their operations.

It is very early days to predict the full impact of Solvency Assessment and Management (SAM)/Solvency II and King III.

On top of these issues, the unfolding proposals on the Social Security Retirement Fund and National Health Insurance programme means that the operating environment has become more complex and unpredictable.

One of the weaknesses of the industry and a critical concern is the capture and use of data. Not all insurance companies have customer relationship management systems and few of those who have are satisfied with their capabilities. There is also the territorial issue of who owns client data. Intermediaries continue to exert powerful control in the channels. One short-term insurer lamented that he failed to have a "line of sight" into his group business. The data chain has many broken links and this frustrates and hinders the producers and this is not to the customers' advantage.

Technology has already changed the rules of the game. In future it will play a major role in new applications for actuarial systems, real-time data mining and various types of modelling.

Short-term insurers expect annual premium growth in the 15% to 25% range in 2010 and anticipate little change over the next three years.

Five long-term insurers were in the 20% range in 2010, but by 2013 growth is expected to slow and only three companies expect growth above 20%.

Risk management was strongly endorsed by participants, who concluded it has added substantially more value to their business than three years ago.

The survey found that companies are monitoring, and in most cases measuring, a wide variety of risks. The three most difficult risks to measure were political risk, environmental risk and latent claim risk. 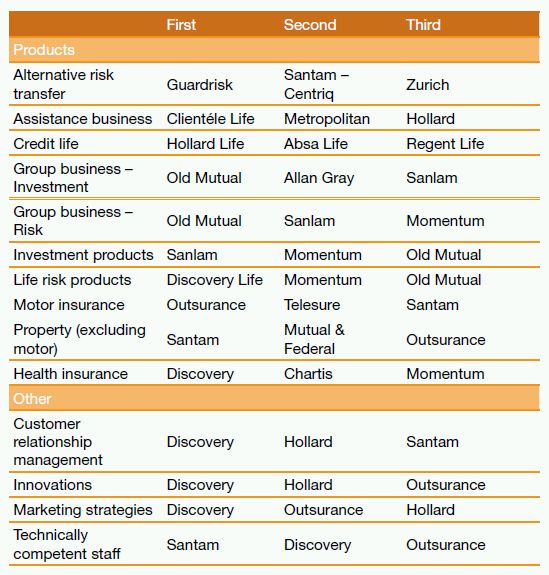 Long-term companies expect to expand their branches by 27% to over 1,600 by 2013. They expect only a modest increase in the number of brokers/intermediaries to 42,400.

The number of employees in the long-term companies are expected to increase at a similar growth rate to the short-term companies although they employ three times as many people.

Finally, policyholders are expected to grow by 30% to 35.7 million by 2013. Two large long-term companies declined to provide estimates for 2010 and 2013. As a result, we were unable to provide an industry estimate for gross premium income.

Q What, in your opinion, are the most important changes taking place in the South African insurance market at present?

The wide range of changes mentioned by participants have been grouped under the subheadings below:

A wide range of different changes were mentioned by participants, but two stood out in terms of the number of recorded mentions. They were the continued move to direct channels and consumerism.

One large short-term insurer noted that personal lines were now becoming a commodity with a focus on pricing.

Another participant commented that the larger insurers were introducing direct channels. He mentioned Sanlam and MiWay but said that other companies were reviewing their options. In keeping with these sentiments, a large short-term insurer said the "volume side" of the business was now being offered through direct channels.

Impact of the financial crisis

While recognising that South Africa had escaped the worst effects of the crisis, several companies mentioned the negative impact on investment performance.

A large long-term insurer indicated a more conservative approach to the use of capital and strong focus on asset/liability management.

Both short- and long-term insurers indicated that there was much more emphasis on risk management.

The SAM (Solvency Assessment Management) target date for both short-term and longterm insurers has been set for 2014. Earlier developments for short-term insurers under FCR (Financial Condition Reporting) will be implemented as an interim measure from 2012.

Participants anticipate that the transition to meet the SAM requirements will trigger major changes in the sector.

One large short-term insurer believed the industry had experienced "an advancement in competency".

Consolidation, costs of regulation and the increased significance of brands have made the environment more challenging for the smaller operators.

Q Can you identify the major strengths and weaknesses of the South African insurance industry at present?

The major strength identified by participants centred on the financial soundness and stability of the South African insurance market. It was viewed as a highly competitive and innovative marketplace.

A number of insurers believed the players to be well capitalised.

Several companies highlighted the uniqueness of South Africa in being simultaneously both an established market and an emerging market.

Other strengths mentioned were:

The most frequently cited weakness was the skills shortage.

Other weaknesses mentioned were:

To read this document in its entirety please click here.