by Jeremy de Beer
ENSafrica
Your LinkedIn Connections
with the authors
To print this article, all you need is to be registered or login on Mondaq.com.

There's been plenty of copyright stories in the news lately, revealing some very interesting issues, one of which is just how much ignorance there still is about copyright.

In the last few weeks, South African media has been buzzing for some time with the news of a major copyright dispute regarding the hit song Jerusalema. It seems that Kgaogelo "Master KG" Moagi and his entertainment company, Open Mic Productions, are being sued for copyright infringement. According to news reports, Jerusalema was created by two other people: Presley Lebogang "Biblos" Ledwaba and Ntimela Chris "Charmza the DJ" Chauke (apparently, you need to have a nickname to be in this story).

Lawyers for the plaintiffs say that their clients "want their creative contributions to be recognised, and for their fair share of earnings generated to be allocated to them... the true originators and key creative contributors without whom the song would not even have existed have been cruelly cut out of the remuneration chain..."

So, it sounds very much like a case of contributors wanting recognition (possibly as co-owners of the copyright) and remuneration. We will be watching this case closely if it makes its way into court!

Have you Heard - Johnny Depp and real muso Jeff Beck have allegedly infringed copyright in a musical work. The musical work is a song titled Sad Motherf*****' Parade, and it's a track on an album that the pair have released called 18. The alleged infringement is the wholesale lifting of certain lines from a poem and song called Hobo Ben. Among the lines are these, which suggest that coincidental similarity is very unlikely:

"What that funky motherf*** really needs, child is a bath."

The author of Hobo Ben is one Slim Wilson, although that's apparently an alias for a man who's self-described as a "cheat and pimp" and who served jail time for murder and armed robbery. The story is that while in prison, Wilson met with a folklorist who documented his poetry and toasts – this genre is described as a "comic form of black narrative folk poetry, akin to hobo balladry."

A university professor who has been consulted had this to say: "I've been publishing stuff like this for 50 years, and this is the first time anybody has just ripped something off and put his own name to it". A spokesperson for Depp and Beck has said that the matter is being reviewed and that "if appropriate additional copyright credits will be added to all forms of the album''

Copyright and tattoos is becoming quite an issue.

There's a "celebrity tattoo artist" and reality TV star who goes by the name of Kat Von D. She's now being sued by a photographer for copyright infringement. The claim is that in 2017, Kat Von D "inked" a tattoo that she copied from a photograph, a photo of jazz musician Miles Davis with his fingers on his lips, taken by a photographer called Jeffrey Sedlik. 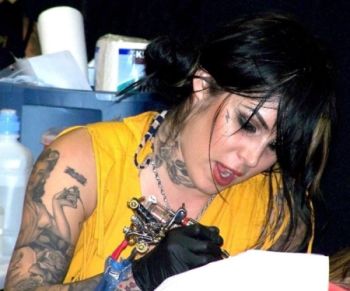 Although Kat Von D was not paid for her tattoo, she did share it on Instagram, where she has 900 000 followers. She denies the alleged infringement, claiming that her tattoo is a transformative work. A US professor of law suggests that if Kat Von D "ultimately put her own spin on it the question for the jury would be, did she do enough to change it?"

There's considerable interest in this matter because tattooing is big business. Some argue that a finding of copyright infringement will severely impact the tattooing "profession" as it will limit what tattoo artists can do. Another copyright lawyer not affiliated with the case is quoted as saying "This [case] could give pause to tattoo artists who are asked to ink third-party imagery on their clients".

An alternative approach to enforcement

Here's an idea – when next someone infringes your copyright, don't threaten them with lawsuits and damages, be nice rather and offer to educate them about copyright and the damage caused by infringement.

There's a photo stock agency called Dreamstime which has decided that the best way to deal with infringements is to try to educate the infringers about what copyright is, when it's infringed, and what the consequence are for both copyright owners and infringers. The agency believes that most infringements are accidental and that it's often simply a case of people not understanding copyright law and licences. The company is hoping that it can turn infringers into customers. Good luck to them!

Some last words on copyright

Copyright is a very important intellectual property right that protects a variety of works including written material, music, art, films and records. In most countries there's no need to register copyright, in fact there's often no provision for registration. Unlike other forms of intellectual property which are restricted to certain territories, copyright is international. The most important aspect of copyright is the right to control copying of the work, although there are other aspects too.

There's far too much ignorance about copyright. This may be understandable, given that it is quite nuanced, and often difficult to prove. If you believe your copyright has been infringed, make sure to speak to a copyright lawyer before racing to 'stick it' to the other side!

ARTICLE TAGS
South Africa Intellectual Property Copyright
POPULAR ARTICLES ON: Intellectual Property from South Africa
Types Of Trademarks: All You Need To Know
Abou Naja
As industries race to gain a legal monopoly on their unique innovations through marks registration, we are inundated with an ever-increasing number of products with
Requirements And Procedure For Registration Of Trademarks In Nigeria
Pavestones Legal
Over the years, trademarks have gained prominence around the world as one of the most important intangible assets of any business. Trademarks play a crucial role in branding as they provide businesses and their products with a unique identity.
Intellectual Property In Nigeria: A Summary Of Protectable Rights In Nigeria
Olisa Agbakoba Legal (OAL)
Generally, Intellectual Property ("IP") covers products of intellectual creations. However, it can also mean a generic term that describes creations of the intellect concerning which the law ascribes the...
حقوق فناني الأداء في قانون الملكية الفكرية
Andersen in Egypt
.أصبحت حماية الملكية الفكرية، في السنوات الأخيرة، مجال اهتمام متزايد في المجال الق
Easier Formality Of Documents Related To Patents And Industrial Designs
United Trademark & Patent Services
The Ministry of Economy issued a circular email on September 13, 2022, announcing the new legalization requirements for the powers of attorney (PoA) related to patents and industrial designs.
Copyright And The Protection Of Creatives
Inventa
This article serves the purpose of educating creatives on the importance of copyright laws in Nigeria. It also provides insight into the major aspects of copyrights, its protection...
FREE News Alerts
Sign Up for our free News Alerts - All the latest articles on your chosen topics condensed into a free bi-weekly email.
Register For News Alerts
Article Tags
South Africa Intellectual Property Copyright
Related Articles
Preventing Genericide: Saving Your Trade Mark From Falling Prey To The Public Domain Adams & Adams
The Claws Are Out In The South African Tammy Taylor Nails Saga. What Are The IP Law Implications? Barnard Inc.
Adams & Adams Anticounterfeiting Team Roll Out Seizures Of Counterfeit Roller Bearings In 3 Provinces Adams & Adams
Copyright And The Rights Of Blind People ENSafrica
The Metaverse, Cryptos, NFTs And IP ENSafrica
Mondaq Webinars
Global Offshore Fintech Focus on Crypto: Laws, Regulations and Trends [REPLAY]
Carey Olsen
A Comparative Approach to Professional Secrecy and Attorney-Client Privilege in Criminal Proceedings [REPLAY]
Monfrini Bitton Klein
More Webinars
Comparative Guides
Dominance
Labour and Employment
Private Equity
More Guides
Mondaq Advice Centres
Global
Trademarks in SAARC Countries
More MACs
Upcoming Events
Mondaq Social Media