President Cyril Ramaphosa has signed the Competition Amendment Bill ("the Amendment Act") into law. It is a significant moment for competition law and enforcement in South Africa. The Amendment Act, while controversial on certain aspects, recognises that the economy must be open to greater ownership by a greater number of South Africans.

In a statement issued on Tuesday, the Presidency said that the amended legislation would address "concentration and economic exclusion as core challenges" to dynamic growth in the country.

The Amendment Act aims to address structural constraints in the economy through these seven key focus areas:

By strengthening the Competition Commission's powers in relation to market inquiries and impact studies. As recently seen with the Health Market Enquiry, the purpose of a market enquiry is for the Competition Commission ("the Commission") to investigate a particular market and to make recommendations to address structural concerns, high levels of economic concentration and economic transformation within a specific market or industry. Presently, the Commission has no explicit power to act on its recommendations.

The Amendment Act will increase the role of public interest grounds in the consideration of mergers. Therefore, the promotion of a greater spread of ownership for historically disadvantaged persons and workers in the market, as well as their ability to enter into, participate and expand within a market will be central in merger analysis on public interest grounds. This will further lead to the promotion of competition and economic transformation through addressing the structural constraints, for example a greater spread of ownership, within a market.

A reverse onus on dominant firms to show that the price of its goods and services is reasonable, the list of prohibited conduct has been expanded and previous 'yellow card' offences will now result in an administrative penalty.

The Minister will be empowered to participate in merger proceedings and applications for exemptions, specifically in relation to public interest grounds. In terms of the Amendment Act, the Minister has the right of appeal against a merger decision of competition authorities if it has substantial public interest implications for a particular industrial sector.

The President may constitute a National Security Committee which will be responsible for considering whether the implementation of a merger involving a foreign acquiring firm may have an adverse effect on the national security interests of South Africa.

The Amendment Act further clarifies provisions of the Act relating to prohibited practices, restricted horizontal and vertical practices, abuse of dominance and price discrimination through the addition of various definitions. The definitions added in the Amendment Act include margin squeeze, average avoidable and voidable cost, predatory prices etc. These additions will assist firms, as well as the competition authorities with the interpretation and assessment of various prohibited practices. Of further relevance is the substitution of 'consumer' to customers which allows for greater protection since all customers involved in commercial transactions would now be protected from excessive prices, as opposed to consumers only.

The increase in penalties for contraventions of the Act from 10% to 25% of a firm's annual turnover if conduct constitutes a repeat offence. The Group/ Controlling firm may be held liable jointly & severally for an administrative penalty. 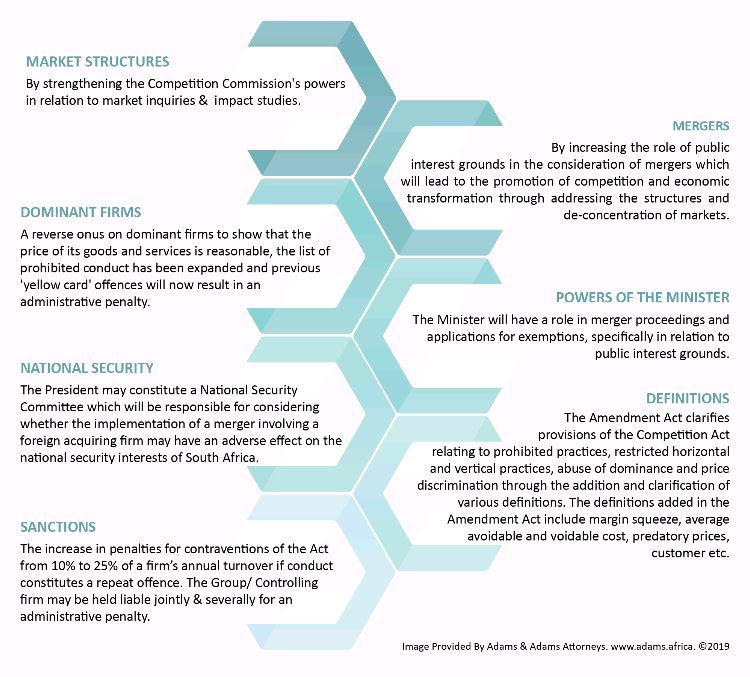