Switzerland: Dealing With FATF Transparency Rules In The M&A And Advisory Practice

In an unusually fast procedure due to international pressure, Switzerland enacted increased transparency regulations for corporations, which became effective as of 1 July 2015. This FATF legislation is proposed to be further tightened. However, in light of uncertainties in the practical implementation of the existing FATF law, this tightening is premature.

Following the implementation of corresponding recommendations of the Financial Action Task Force (FATF) in Art. 697i et seqq. of the Swiss Code of Obligations (FATF Act) as of 1 July 2015 and the subsequent peer review, the Global Forum granted Switzerland the overall grade of "largely compliant" in summer 2016, at the same time making additional recommendations on the tightening of the transparency of legal entities.

In view of the forthcoming peer review of the Global Forum, the Federal Council proposes a drastic tightening of the FATF Act: Among other things, bearer shares for unlisted companies to be abolished and the introduction of criminal sanctions for breaches of the FATF reporting obligations. The consultation on the corresponding draft law of 17 January 2018 (FATF Revision) lasted until 24 April 2018. The FATF Revision is currently in the process of being amended and is expected to be newly published on 21 November 2018, followed by parliamentary debates during the spring and summer session in 2019. The finally passed FATF Revision is scheduled to enter into force in October 2019.

The general abolition of bearer shares for unlisted companies would be a drastic measure and would go beyond the objective in view of the transparency provisions already in place in the current FATF law. The introduction of criminal sanctions provided for in the FATF Revision raises serious constitutional concerns, as the underlying legal provisions on the reporting obligations of shareholders in the current FATF Act are incomplete and unclear, and are thus not suitable to comply with the general principle of the certainty of criminal law.

Instead of the planned tightening of the FATF Act, it would thus be more urgent from a legal application perspective to utilize the forthcoming FATF Revision primarily to remedy the shortcomings of the current FATF Act.

When applying the current FATF Act into M&A and advisory practice, numerous problems arise with fundamental questions, such as when a reporting obligation pursuant to Art. 697j CO is triggered (Sections 2.1 and 2.2), who must be reported in which constellations (Section 2.3) and how reports are to be made (Section 2.4).

The following is a rough guideline on how the cautious addressee of the FATF Act can deal with selected issues that are at the forefront of day-to-day practices in the context of the relevant reporting obligations.

Among others, any acquirer of shares in a Swiss company (Target Company) that is thereby reaching or exceeding the threshold of 25% of the share capital and/or voting rights (Qualified Shareholder), is subject to the FATF reporting requirement.

The only decisive factor here is the direct acquisition of shares in the Target Company. An indirect acquisition at a higher participation level does not trigger a reporting obligation, but may, under certain circumstances, require an update of an earlier FATF notification.

Not only those who acquire a qualified stake in the Target Company alone, but also those who are doing so acting in concert with third parties, are subject to the FATF reporting obligations. However, it is not always easy to judge when such an acting in concert exists. For example, if there is a shareholders' agreement, acting in concert triggering the reporting obligation must not automatically be concluded. Rather, such an obligation only exists if the joint acquisition of a qualified stake in the Target Company is the subject matter of the shareholders' agreement in question, or if the same is entered into directly in connection with such a joint acquisition. 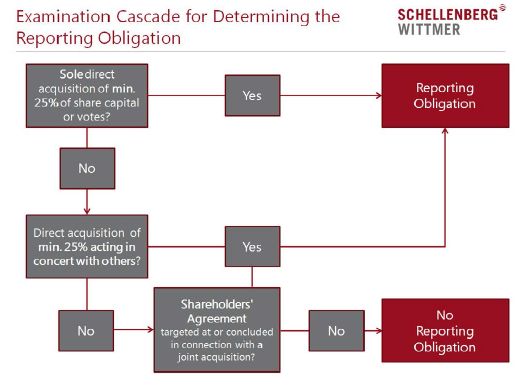 2.2 EXCEPTIONS TO THE REPORTING OBLIGATION

There is no reporting requirement for the acquisition of shares of Target Companies which are traded on a stock exchange or are structured as intermediated securities within the meaning of the Swiss Intermediated Securities Act.

However, the law does not comment on the question that frequently arises in practice, as to whether this statutory exception also applies if, instead of the Swiss Target Company, the acquirer of a qualified stake in a non-publicly listed Target Company, or any of such acquirer's direct or indirect parent companies, is a listed public company or has issued intermediated securities. In our view, the reporting obligation does not apply in either of these cases.

This must apply mutatis mutandis to the other statutory exceptions of the reporting obligation which, according to the wording of the law, relate to the Target Company only. As a consequence, the reporting obligation does in our view not apply if a public institution, a cooperative or a non- profit organisation, directly or indirectly, acquires a qualified stake in a Swiss Target Company.