The Norwegian market continues to be of significant importance to Conyers' Bermuda corporate practice. The foundation of this practice is our extensive and long-standing relationships with Norwegian law firms, defence clubs, corporates and financial institutions. Although the relationships remain constant, the nature of the work has evolved over the past year due to the challenging financial climate.

In the 2015 edition of our bulletin, we rightly predicted there would be movement away from capital markets and financings, and a shift toward refinancing, restructuring and consolidation. Our highlighted transactions reflect this trend. Capital markets activities have been limited to bond issuances by known and established corporates. New IPOs have been few and far between – with only eight IPOs on the Oslo Børs since our last bulletin and none so far in 2016.

The most noteworthy development in the Bermuda market since our last bulletin has been the growth and development of the Bermuda Ship Registry (the "Registry"). In the last 12 months the Registry has experienced an increase in registrations, as demonstrated by the graphics on page 5 and 7 of this bulletin. Fuelled by this growth, the Registry is planning to change its operations to better accommodate and service ship owners. These details, along with historical facts about the Registry, are featured inside.

We have prepared this bulletin for our clients and legal colleagues who work with us in the Norwegian ship finance and shipping capital markets space. We value these relationships and look forward to future opportunities to collaborate together.

Our Bermuda corporate law practice in the Norwegian market continues to strengthen year-over-year.

In line with previous years, vessel finance represented over 50% of our Norway sourced work. New ship registrations increased significantly in 2015. Our shipping work in Norway increased to account for 37% of new matters taken on by our Bermuda shipping practice in 2015. 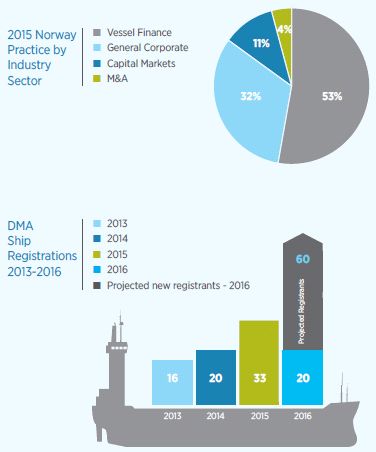 BERMUDA CORPORATE PRACTICE BY THE NUMBERS

Our expertise extends to capital markets transactions including, cross-border ship financings and vessel purchases, sales and registrations (in Norway and the United States), as evidenced by the numbers set out below. 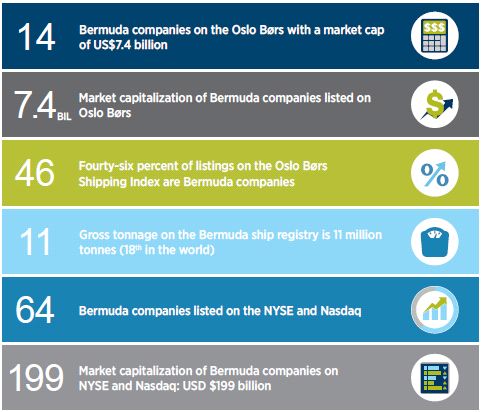 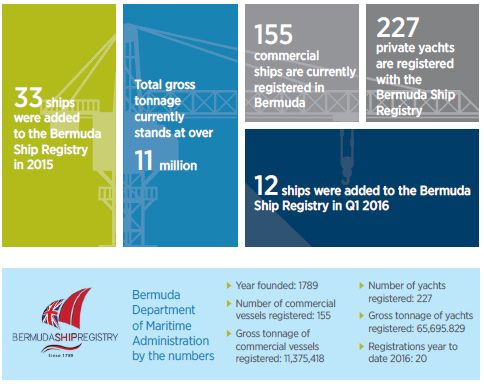 What is the attraction of the Bermuda Ship Registry?

Bermuda has a reputation of being a premier jurisdiction with strict safety and manning regulations and discerning owners choose Bermuda for this reason. Documentation from all of the major classification societies is acceptable to the Bermuda Ship Registry (the "Registry") and registration and tonnage fees remain competitive with other offshore jurisdictions.

The Registry is a Category One member of the prestigious Red Ensign Group. Bermuda is continuously, and has been for many years, listed on the "White List" of the Paris MOU. In addition, the Registry is part of the US Coast Guard QUALSHIP 21 programme for its commitment to safety and quality; meaning that Bermuda registered vessels will not be targeted for inspection by the US Coast Guard.

The Registry is supported by the Regulatory Authority of Bermuda and RCC Bermuda. The Regulatory Authority is responsible for issuing the required radio station licenses which must be issued to owners of Bermuda registered ships. RCC Bermuda is the agency tasked with registering Emergency Position Indicating Radiobeacon Station equipment carried on board Bermuda registered vessels.

The Registry is determined to not rest on its laurels and has committed to restructure of a Government quango. In the year ahead, the Registry will become an independent authority, legally and operationally separate from the Bermuda Government's Department of Transport and Tourism. This transition is expected to conclude mid-2016 and will allow the Registry to grow and better serve the owners of Bermuda ships and yachts.

Our experience in the Norwegian market is demonstrated through recent work on a number of high-profile transactions. Below we have highlighted the more significant transactions in the ship finance and shipping capital markets space that we have advised on in the past 12 months.

Stolt-Nielsen Limited, the world's largest chemical tanker company, returned again to the capital markets in April 2015 with the issuance of NOK1.1 billion senior unsecured bonds due in 2020, with Nordic Trustee ASA as bond trustee. Conyers advised Stolt-Nielsen Limited on the Bermuda law aspects of the transaction. This follows similar bond issues in 2012 and 2014. The bond was issued at 4.1 percentage points over the three-month Norway interbank offered rate, or Nibor.

In May 2015 Conyers advised Northern Offshore Ltd. ("NOL") on the Bermuda law aspects of the acquisition of NOL by Shandong Offshore International Company Limited ("Shandong") made pursuant to the terms of a recommended cash acquisition of NOL by Shandong Offshore Company Limited, a wholly owned subsidiary of Shandong (the "Acquisition"). The Acquisition was implemented by way of an amalgamation under Bermuda law at an acquisition price of NOK7.59 per NOF share (approximately NOK1.3 billion (US$164.9 million)), payable in cash with the amalgamated company to be called Northern Offshore, Ltd. As a result of the Acquisition, NOL's assets were combined with an affiliated company of Shandong, Blue Ocean Drilling, to be managed by NOL. The new amalgamated company has a fleet that includes one drillship, one semi-submersible, one floating production platform and two jackups. Six new build high specification jackups are currently under construction. Upon completion of the Acquisition, NOL's shares were delisted from the Oslo Børs.

Conyers was selected as counsel to NOL on this matter, which represented a milestone in their history, with NOL now capable of operating in all major petroleum resource regions around the world.

Conyers advised BW Offshore Limited (BWO:OSLO) ("BW Offshore") in June 2015, on the Bermuda aspects of a NOK900 million senior unsecured bond issue with maturity in June 2020. BW Offshore is a leading global provider of floating production services to the oil and gas industry. The proceeds of the bond issue will be used for general corporate purposes. Danske Bank Markets, DNB Markets, Nordea Markets and Swedbank Norway acted as joint lead managers for the bond issue.

In April 2016, Conyers was pleased to advise DNB Bank ASA and a syndicate of other banks on the Bermuda law aspects of a transaction involving the re-financing of five LNG Gas Carriers owned by the GasLog Group, specifically, GasLog Ltd. and GasLog Partners LP. The transaction was structured as a two-tiered financing comprising a US$396.5 million five year senior facility agreement and a US$180 million two year junior facility agreement. The vessels are Bermuda registered and certain ship mortgages, in respect of the facilities, were registered against each vessel. The vessels involved were the GasLog-owned Methane Lydon Volney and Methane Becki Anne and the GasLog Partners-owned Methane Alison Victoria, Methane Shirley Elisabeth and Methane Heather Sally. The transaction refinanced all 2016 and 2017 debt maturities leaving GasLog and GasLog Partners with no re-financing requirements until 2018.

HOW SHIPPING LAUNCHED BERMUDA AS AN OFFSHORE FINANCIAL JURISDICTION

Shipping was the first industry to put Bermuda on the international business map in the 1950s - largely through the efforts of David Graham, former partner of Conyers Dill & Pearman, who was the first to suggest registration of ships in Bermuda could be advantageous for foreign shipowners from a tax perspective.

Throughout the mid-1950's Graham spent a great deal of time working with the British government to receive approval to open the Bermuda Ship Registry (the "Registry") to British ships. The biggest concern at the time was that the move would result in the loss of taxation to the British Government. Graham met with the British Treasury, and argued that the loss of taxation revenues would be minimal as company dividends would be taxable on their repatriation to the UK and that crucial benefits would accrue from the diversification of the Bermuda economy.

The British Treasury baulked at losing business it already had, so compromise was reached by which Treasury approval would not be needed if a British company was entering into a new business from, rather than transferring existing business to, Bermuda.

Soon after Treasury approval was granted to Bermuda, the P&O line, Britain's largest, arranged for its tanker fleet to be registered in Bermuda and other British ship owners followed suit. The British Government came to understand that Graham's proposal served to extend, rather than curtail, British interests. Allowing the UK fleet to migrate to the Bermuda flag kept the vessels on an ultimately British register, with the Bermuda company providing tax relief.

By the end of 1956, the Registry had become one of the largest in the world. Today, the Bermuda Ship Registry is thriving with gross tonnage of more than 11 million. Conyers has grown too - from a trio of practitioners to the only international law firm headquartered in Bermuda, with 130 lawyers in eight offices worldwide. Shipping remains an integral practice area that continues to grow with Norway sourced work counting as our largest and most important shipping market.

STATE OF THE MARKET

As we noted at the beginning of this bulletin, the state of the shipping related financial market remains extremely challenging. We suspect that only an extreme optimist would predict a successful launch of a shipping related IPO in 2016.

For the foreseeable future we expect more of the same as far as restructurings are concerned. Banks will continue to foreclose on offshore drilling rigs and pay unwanted high storage fees as the least bad option. The fact that around two-thirds of the outstanding debt of the Norwegian high-yield market is related to the oil and gas sector means that bond restructurings will continue.

We also expect very few new bond issuances for new issuers, particularly in the high-yield category. Corporate borrowers will therefore need to find alternative means of raising capital in this difficult financial climate, which may result in asset disposals or consolidation of businesses. We expect that some established corporates will seek additional capital from their shareholders through rights offerings.

Within this challenging and constantly changing environment we look forward to continuing collaboration with our Norwegian partners.