by Svitlana Teush
Redcliffe Partners
Your LinkedIn Connections
with the authors

The legislation was finalized from a memorandum of understanding drafted after lengthy negotiations between government and industry.

Yesterday, long-awaited draft law No. 3658 On the Amendments to Certain Laws of Ukraine on the Improvement of Support for the Production of Electricity from Alternative Energy Sources (Law), was adopted by the Ukrainian parliament following its second and final reading. Adoption concluded a lengthy negotiation process about restructuring the feed-in tariff (FIT) support mechanism for renewables in Ukraine, with the stated aim of improving the FIT's sustainability and supporting market liquidity.

The negotiations involved key policymakers and industry players and were facilitated by the Energy Community Secretariat through a formal mediation procedure which produced a memorandum of understanding that provided the basis for elaboration of the law. The law essentially reflects the key arrangements found in the memorandum, representing a compromise between the government and the industry. Notably, terms for those solar projects which are under construction and hold signed preliminary power purchase agreements (PPAs) have been improved by the law, compared to the memorandum, enabling those projects to be continued on fairly acceptable terms.

The following summary is preliminary and based on the text submitted to the parliament for the second reading and discussed during the parliamentary hearing. However, changes are still possible during preparation of the final text prior to its signing.

The law will become effective following its signing by the president and official publication. 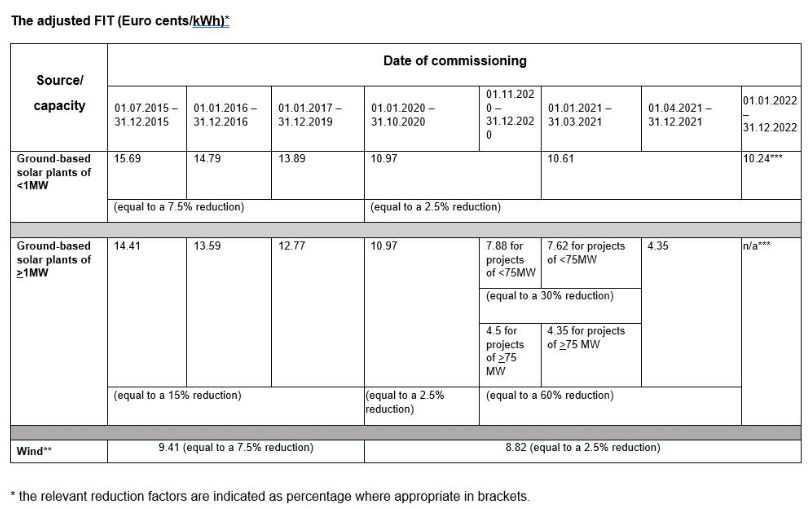 ** Where the installed unit capacity of a wind turbine is equal to, or exceeds, 2 MW.

*** The FIT is no longer available after two years from the signing of a pre-PPA for solar of more than 1 MW generation capacity. The FIT for solar with a capacity of less than 1 MW will be €0.042/kWh and will be further reduced depending on the date of commissioning of a plant. For the sake of simplicity, we do not consider further reductions of the FIT for small solar and wind power projects in the table above.

For all power produced from renewable energy sources (RES) under the FIT that were commissioned on or before June 30, 2015, the FIT should be capped at approximately €0.24/kWh. If lower than or equal to the maximum cap, the FIT is multiplied by a coefficient of one.

The same coefficient applies to all RES not mentioned above, including, among others, biomass, biogas and hydropower projects. Therefore, the FIT rates applicable to such other RES have not been changed with the adoption of the law.

This is subject to tolerance margins of 10% for wind and 5% for solar.

For plants with a capacity not exceeding 1 MW, the balancing responsibility will be gradually introduced, starting at 10% next year and increasing by 10% annually until it reaches 100% in 2030; the tolerance margins stated above are also applicable.

The government should, within three months of enactment of the law, submit the draft law entitling RES producers to quit the offtaker's balancing group – in which group, RES producers under the FIT or auction price must currently participate – and to freely sell electricity and be compensated for the difference between the FIT or auction price and the market price, but not lower than the price on the day-ahead market.

To address the matter, the law introduces a mechanism of provision by RES producers of load reduction services to the electricity transmission system operator (TSO). The cost of such services should amount to the FIT or the auction price, as appropriate, payable to RES producers for the volumes of under-supplied electricity following TSO curtailment orders. The relevant costs of the TSO, payable to RES producers, should be included in the transmission tariff of the TSO. Therefore, it should be the TSO which will be responsible for the payment of curtailment compensation to RES producers at the FIT or auction price.

The procedure for the provision of such services – including the order of priority in the acceptance of offers for load reduction services – as well as the methodology of calculation of electricity volumes under-supplied by RES producers following the TSO orders for curtailment, should be approved by the energy regulator and included in the market rules within a month of enactment of the law.

The above compensation mechanism for curtailment through the cost of relevant load reduction services of RES producers, does not apply where curtailment is ordered by the TSO for power system constraints caused by force majeure.

6) Stabilization clause. The law contemplates certain changes to the law of Ukraine On the Regime of Foreign Investment with regard to the state guarantee and the stabilization, or "grandfathering", clause. It is maintained that the rights and obligations of parties to PPAs under the FIT should be governed by legislation effective as of the date of enactment of the relevant law, save for changes in law relating to defense, national security, tax legislation, public order or environmental protection. The state guarantees that from July 1, 2020 until December 31, 2029, the FIT will not be changed or cancelled, and the reduction factors to the FIT will not be changed or applied in a way entailing damage or losses or deprivation of an investor's legitimately-expected revenues.

The state guarantee of foreign investment related to the FIT shall apply for the entire period of the FIT.

7) Financing offtaker payments of the FIT. As a measure designed to improve the offtaker's liquidity, the law extends the list of potential sources of financing for the offtaker's costs related to payments of the FIT to RES producers. Currently, they include financing at the cost of a special surcharge to the transmission tariff payable by the TSO to the offtaker for its services, related to the increase of the RES share in electricity production.

The government will be able to provide funds in the state budget for the financial support of the offtaker in an amount of not less than 20% of the estimated electricity production from RES in the relevant year. This would be possible based on the budget requests submitted by the Ministry of Energy, together with the supporting calculations of the energy regulator.

It also allows the temporary allocation of 70% of the proceeds raised by the TSO from the allocation of cross-border capacities as at July 1, 2020 for paying the offtaker; the offtaker must then allocate 50% of these funds to pay RES producers under the FIT.

The plan is to develop and submit to parliament, within three months following enactment of the law, draft laws contemplating issuance of government domestic bonds to support offtaker settlements with RES producers.

8) Changes to the auction system. The law amends the regulatory framework for renewable energy auctions, which are expected to be launched next year. These amendments are mainly designed to improve market competition and access to auctions, as well as to provide the government with the greater flexibility needed for decision-making – for example, when determining and allocating quotas. Auctions will provide yet another support mechanism for renewables, the key attraction being the auction price will be fixed for 20 years and referenced to the euro.

The general trend discernible behind most of the changes above, is toward diversification of support mechanisms for renewables in Ukraine; improving market competition, liquidity and sustainability in the long term; and reducing costs incurred in electricity production, system balancing and the integration of renewables. This follows global market patterns and is key to accomplishing, and maintaining, new promise for renewables in Ukraine.

Svitlana Teush, PhD, is counsel for energy, construction and infrastructure at the Redcliffe Partners independent law firm, which previously operated as the Kyiv office of international firm, Clifford Chance. She has practised law for more than 15 years, supporting projects in the energy, construction and infrastructure sectors. Since the introduction of the FIT in Ukraine in 2009, Teusch has been supporting renewable energy projects in the country and has advised on associated issues of land use; construction; grid connection; regulatory licenses and permits; contracts for engineering, procurement and construction and operations and maintenance services; and application of the FIT, bonuses and other elements of state support for renewables. She is a contributing expert of the Ukrainian Wind Energy Association; a member of the supervisory board of the Bioenergy Association of Ukraine and a member of the national ICC Commission on Environment and Energy in Ukraine.