The Taiwanese Government has set aggressive renewable energy targets, with a particular focus on the development of its offshore wind power capabilities. This exciting new market presents great opportunities for foreign investors. At the same time, it highlights the need for a local legal and regulatory framework that will foster the development of the market in an effective and efficient manner.

This Jones Day White Paper provides an overview of the current legal and regulatory framework for offshore wind farm projects in Taiwan, including the general procurement process, environmental approval process, grid allocation process, approvals/licensing regime, and other key considerations for offshore wind developers (i.e., foreign ownership limits, foreign exchange controls, etc.). The intention is to provide foreign investors with an early "heads up" of what to expect when seeking to undertake offshore wind energy projects in Taiwan.

Taiwan is located in East Asia with Mainland China to the west, Japan to the northeast, and the Philippines to the south. It is referred to as one of the "Four Asian Tigers" 1 and is the seventh-largest economy in Asia. Taiwan is a member of the World Trade Organization ("WTO"), the Asia-Pacific Economic Cooperation ("APEC"), and International Chamber of Commerce ("ICC") and is an observer at the Organisation for Economic Cooperation and Development ("OECD"). Taiwan's primary trade partners include Mainland China, Hong Kong, the United States, Japan, and Singapore. Annex 1 provides an overview of the legal framework in Taiwan. 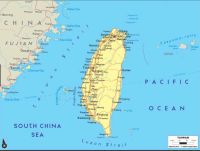 Taiwan is surrounded by sea. The geographic environment provides an abundance of wind energy to many areas along the coast of Taiwan and its offshore islands. On the west coast of Taiwan, where the majority of the offshore wind farm projects will be located, the average wind speed reaches up to approximately 11.24 meters per second (measured at 100 meters).2 These wind speeds are far in excess of the neighboring coastal area of Hong Kong, with wind speeds of up to approximately 5.8 meters per second (measured at 105 meters).3 The abundance of offshore wind resources in Taiwan presents a significant opportunity for investors in the offshore wind farm market.

To achieve the Government's renewable energy targets, the Government announced on July 3, 2012, the "Thousand Wind Turbines Project" (the "Program"). The Program is divided into the following three phases:

In July 2015, the Bureau of Energy ("BOE") released 36 zones for potential development of future commercial wind farms. Those developers that have received preliminary approval of their environmental impact assessment ("EIA") may apply for developing the relevant zone. As of January 30, 2017, 24 offshore wind farm projects have received the Taiwanese Environmental Protection Administration's ("EPA") preliminary approval (including 11 projects that have obtained final approval). There are three offshore wind farm projects continuing to undergo the preliminary EPA review.

Recently, the BOE increased the offshore wind energy target for the Transition Round from 3 GW to 5.5 GW.6 3.5GW of projects will be guaranteed at a fixed feed-in tariff for 20 years. The remainder of the projects will go through a competitive auction to sell power at a lower price in a tender held by Taiwan Power Company ("Taipower"). Of the 5.5 GW of targeted capacity, the Government plans for 500 MW (with feed-in tariffs) to be operational by 2020, with the remainder to be operational by 2025.

Further details regarding the process for developers to apply for an allocation of the 5.5 GW of capacity is set out in "Grid Allocation Process" below.

As part of this phase, the offshore wind farm projects with an aggregate capacity of 5 GW, as selected pursuant to the Transition Round, will be developed as self-sustaining projects and on a commercial scale.

It is anticipated that the projects will be developed according the following indicative timeline: 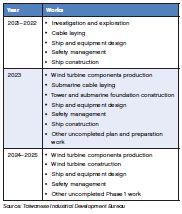 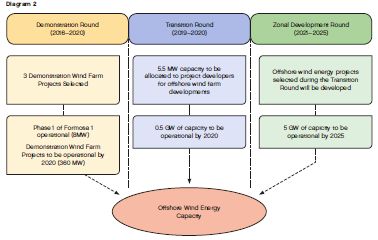 In the period to 2025, the Taiwan Ministry of Economic Affairs ("MOEA") intends to invest NT$684 billion (US$22.74 billion) in order to achieve its onshore/offshore wind power targets. The MOEA hopes that this initial investment will stimulate the private sector to contribute NT$478 billion (US$15.92 billion) in the same period.

While the offshore wind farm market in Taiwan is in its infancy, the onshore wind farm market is relatively mature. As of July 2017, there were a total of 348 onshore turbines in Taiwan situated mainly along the western coastline and in outlying Penghu County with a total capacity of 686.7 MW, accounting for 15.3 percent of installed capacity of renewable energy.7 By 2025, the Government aims to have a total of 450 turbines, with an installed capacity of 1.2 GW.8

Since 2000, the Government, including the BOE and the MOEA, has actively promoted the development and application of onshore wind power development through resource exploration, technical guidance, research survey, and, particularly, by providing subsidies for the purchase of equipment.

While the Taiwan onshore wind farm market is reasonably developed, it is not without its challenges, including:

Some of the same issues will also be challenges for the development of the offshore wind farm sector in Taiwan. For instance:

With regard to the necessary site leases for offshore wind energy projects, the National Property Administration has released a regulatory letter, specifically permitting the lease for an offshore wind farm project to extend beyond the nine-year limit placed on onshore wind farm projects on government-owned land and to instead remain effective for the period of the electricity license. Upon the expiry of the electricity license, the lease will remain effective with the consent of the Government.9

OVERVIEW OF THE LEGAL AND REGULATORY FRAMEWORK

From a foreign investor's perspective, an informed understanding of the legal and regulatory framework (including the general procurement process, environmental approval process, approvals/licensing regime, foreign ownership restrictions, environmental requirements, and foreign exchange controls) will be critical before making any investment decision regarding the Taiwan offshore wind farm sector.

The primary legislative instruments for the renewable energy sector in Taiwan include:

The Electricity Act ("EA"): The EA covers the establishment of power plants and the transmission and distribution of electricity. The EA was amended on January 26, 2017, with the aim of liberalizing the power market by:

The Renewable Energy Development Act ("REDA"): The REDA was introduced in July 2009 as part of the Government's aim to increase the installed renewable energy capacity in Taiwan.

The REDA covers a mixture of obligations and incentives, including:

In addition to the EA and the REDA, there are various other legislative instruments that govern the development and implementation of offshore wind farm projects. These are set out in Annex 1.

The process for implementing offshore wind energy projects in Taiwan is currently in its infancy. Diagram 3 below provides a high-level overview of the procurement process. At present, the market is developed only as far as the EIA approval, with the grid allocation the next hurdle to overcome.

The procurement process is considered in more detail in the following paragraphs of this section, with a particular focus on the processes currently being encountered by offshore wind power developers—the environmental approval process and the grid allocation process. 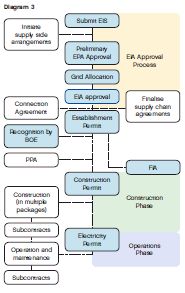 2. Obtain the Establishment Permit ("EP"): The EP is issued by the BOE. It is a precondition to the EP that the final EIA approval has already been obtained. To obtain the EP, the applicant is required to obtain consent letters from various authorities, including the local government, the National Property Administration, and the Ministry of Transportation and Communications. Based on the practice in other sectors in Taiwan, the processing time for these consent letters varies and may be unpredictable.

It is also necessary for the project developer to: (i) satisfy a capitalization requirement of at least 5 percent of anticipated capex; (ii) enter into a connection agreement with Taipower; and (iii) obtain letters of intent from financial institutions for the financing of the project.

The EP is valid for a period of three years (and may be extended for a further two years).

Annex 4 provides a detailed flowchart of the process for obtaining the EP.

4. Power Purchase Agreement ("PPA"): Within six months of obtaining its EP and the required recognition from the BOE, the project developer is required to enter into a PPA with Taipower. Taipower is a 96.92 percent government-owned power entity providing electricity to Taiwan.

The standard form PPA for the offshore wind energy sector was recently published by Taipower. Refer to "Power Purchase Agreement" below for Jones Day's preliminary comments on the PPA.

5. Obtain the Construction Permit ("CP"): The CP must be obtained from the BOE prior to the commencement of construction. An applicant may submit an application for an EP and CP in parallel; however, the CP may be granted only after the applicant has obtained the EP. The CP is valid for five years and is renewable.

6. Obtain the Electricity License ("EL"): The EL must be obtained prior to the commencement of operations. Annex 4 provides a detailed flowchart of the process for obtaining the EL.

While it may vary, the time period for the BOE to issue the EP, the CP and the EL usually takes a period of two to three months for each license / permit from the time of application.

Regime. The EPA is the agency responsible for the development of the environmental standards and coordinating action among the various other Governmental agencies. It has also been proactive in developing a legislative basis for environmental management in Taiwan.10

The Environmental Impact Assessment Act governs the EIA process. The EIA process is intended to prevent and mitigate adverse impacts of development activities (including pre-implementation planning, project implementation, and post-project facility use) to attain the goal of environmental protection.

EIA Process. A project developer for an offshore wind farm development is required to obtain the EPA's approval of the EIA in order to progress with the development of the project.

To date, the EIA process has proven to be a difficult barrier for offshore wind power developers. The Taiwan Strait is a heavily trafficked waterway, and the EPA is closely scrutinizing how offshore wind development will affect the ecology.

The process for obtaining the requisite EPA approval is summarized below (and illustrated in Diagram 4). The process may vary (depending on whether the project developer is required to conduct a Phase II EIA) and may take an extended period of time to complete.