Most Popular:  Article Kazakhstan, November 2021
To print this article, all you need is to be registered or login on Mondaq.com.

On July 14 in 2021 European Commission developed EU Green Deal1 environmental plan. It is planned to reduce carbon dioxide emissions by 55% by 2030. The Carbon Border Adjustment Mechanism (CBAM) was introduced to achieve this goal. From 2023, CBAM will apply to goods with a carbon footprint imported into the EU. The authorities of European countries imply a transition to alternative energy sources to strive hydrocarbon neutrality. Currently, some experts associate the future of green energy in the world with the use of hydrogen.

About 70 million tons of hydrogen are produced annually in the world for use in oil refining and production of ammonia for fertilizers2 . However, hydrogen is almost entirely produced from fossil fuels, mainly from natural gas, but also from coal. Carbon dioxide emissions from such production are extremely high: 70 million tonnes of hydrogen produce about 830 million tonnes of CO2 per year. An overabundance of carbon dioxide in the atmosphere is dangerous for the planet by an increase in thermal energy and greenhouse gases. Mentioned problems cause global warming in result. Uncontrolled emissions of carbon dioxide into the atmosphere lead to changes in climate, sea level and species composition of flora and fauna.

In order to prevent the abovementioned issues, it is necessary to achieve zero carbon dioxide emissions through decarbonisation of the energy sector. This can be achieved through the transition to a green hydrogen economy. According to a 2021 report from the International Energy Agency3 , 17 governments have published hydrogen strategies today, more than 20 governments have publicly announced that they are working on strategies, and many companies are looking to take advantage of the hydrogen business opportunities.

The problem of polluted air in cities, the lack of utilisation of carbon dioxide at factories, as well as the global experience of switching to alternative energy sources have determined the adopted vector for decarbonisation of the energy sector of the Republic of Kazakhstan. President Kassym-Zhomart Tokayev in his State of the Nation Address dated September 1, 2021, points out the need to develop the production of "green" hydrogen and hydrogen energy in general4 . "Green" refers to hydrogen produced by electrolysis of water from renewable energy sources. Today, all hydrogen produced in Kazakhstan is "grey", as it is obtained from oil products, gas and coal, while forming carbon dioxide emissions. In the same Address, the President sets a task for the Government of Kazakhstan to achieve carbon neutrality by 2060. In order to implement the Address, it is necessary to take a course on the introduction of energy efficiency, electrification, biofuels and hydrogen, as well as a large-scale transition to renewable energy sources. 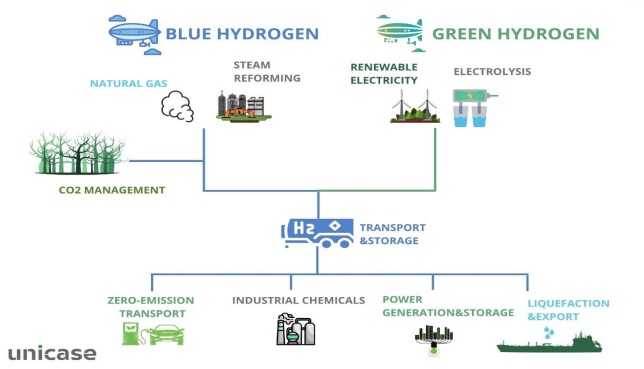 The Kazakhstani company KazMunayGas has adopted a Low-Carbon Development Program5 . The main goal of this Program is to reduce its carbon footprint. According to the company, carbon gas emissions in 2019 amounted to 10.7 million tons. In accordance with the adopted program, by 2031 it is planned to reduce them to 15% of the level of 2019, that is, to 1.6 million tons. The program also contains additional measures to decarbonise the economy (hydrogen production, development of renewable energy sources, utilisation of carbon dioxide, etc.). Greening the production of hydrogen, that is, obtaining it through electrolysis with the help of renewable energy sources is the primary task of Kazakhstan.

Kazakhstan is a favourable destination for investment in hydrogen energy due to its extensive land resources. European companies have special interest in cooperation with our country. Thus, the largest project in the field of hydrogen use is supposed to be the joint activity of the Akimat of the Mangistau region and the German-Swedish group of companies Svevind. They plan to design a plant that will produce "green" hydrogen. The largest and most famous Svevind project in Europe is the Markbygden 1101 wind power complex operating in Sweden with a capacity of 650 MW. As a result of the planned project, Kazakhstan could become the largest hydrogen producer in the world by 2030. Investors are planning to build wind and solar power plants with a capacity of 30 GW feeding electrolyzers for the production of up to 2 million tons of hydrogen per year. A part of the produced hydrogen will be sent for an export to the countries of Europe and China. The rest of products will be process into "green" ammonia for use as a raw material.

For the development of hydrogen energy, first of all, it is necessary to create a competent and clear hydrogen strategy. This document will consistently describe a plan for the development of hydrogen energy. Further, it is required to attract foreign investment through the conclusion of mutually beneficial agreements, memorandums and contracts. Enterprises and production facilities created as a result of such cooperation need modern infrastructure for their further functioning. And the main condition for the viability of hydrogen energy is the demand of the world economy for the production, export and import of "green" hydrogen.

Thus, many countries have long recognized the need to develop hydrogen fuels to reduce carbon dioxide emissions. Currently Kazakhstan is only at the beginning of the path towards the transition to "green energy". A comprehensive study of not only the issues of hydrogen production, but also its storage and transportation, will allow Kazakhstan become a leading country in the field of hydrogen energy.

1 Transforming our economy and societies/ https://ec.europa.eu/info/strategy/priorities-2019-2024/european-greendeal/delivering-european-green-deal_en

4 Address from the Head of State Kassym-Jomart Tokayev to the people of Kazakhstan "Unity of the People and System Reforms - A Firm Basis for the Country's Prosperity" dated 01.09.21 / https://www.akorda.kz/ru/poslanie-glavy-gosudarstvakasym-zhomarta-tokaeva-narodu-kazahstana-183048;