by Ancy Jacob (Uttar Pradesh) and Raj Priya (Uttar Pradesh)
Khurana and Khurana
Your LinkedIn Connections
with the authors
To print this article, all you need is to be registered or login on Mondaq.com.

New Patent Law For Uae: A Move Towards Fostering Innovation

The UAE's Patent law governs the procedure for registration and enforcement of patents in UAE. The Ministry of Economy of UAE has scrapped the old Patent law of the federation giving birth to a new Patent legislation which is the Federal Law no.11 of 2021 concerning the Regulation and Protection of Industrial Property Rights, while introducing some notable changes in the procedure for registration of patents, industrial designs, integrated designs, undisclosed information and utility certificates in UAE.

To get a patent registered, it has to be specified by the applicant what he seeks to get protection for and such specifications are known as patent claims. Under the earlier law, the formality procedures involved with getting a patent registration was strict since the claims were required to be submitted at the time of filing. In case of occurrence of any errors in the formality procedure, there were no clear instructions given to the applicant as to how to correct such errors.

The new law has introduced easier formality procedure. Now, the claims need not to be submitted at the time of filing a patent application thus giving more time to the applicant to decide on the scope of the invention. Further, instructions will also be provided by the Ministry of Economy to the applicant on how to amend formality errors, making the process more transparent and hassle free.

Persons having objection to the registration of a patent have the right to object to such registration and plead their case. Under the earlier law, any objection to the grant of a patent was to be made directly to the Appellate Committee due to which the opposition procedure was costly and time consuming, the administration was difficult and there were less chances of any additional technical review on the matter by experts. However, the new UAE patent law has allowed post grant re-examination and opposition making the opposition procedure faster and cheaper. Now, if any person has opposed a patent application, a re-examination would be conducted by a collegial body. This way, the administration will be easier as it could be done through e-services. The opposition can now be reviewed by senior examiners with technical and legal expertise.

Patent for an invention can only be registered if it is a new invention and has not been disclosed to the public before filing of the patent application. However, the patent laws of some countries provide for relaxation to the pre-condition of non-disclosure of the invention if it has been disclosed or published within a certain period of time before filing of the patent application. This period of time is known as grace period. The new patent law of UAE has increased the grace period for public disclosures from 6 months to 12 months. Under the earlier law, a grace period of 6 months was provided only in case the publication was in a national exhibition. Now, under the new law, any national or international disclosure such as exhibition display, article, etc. can be waived off if such publication was within the grace period of 12 months.

The new law has allowed publication of a pending patent application after a period of 18 months from filing of that application. This change was implemented to enable early access of the application information by the public and promote better public awareness. The new law encourages public examination by allowing anyone to submit information regarding the published application.

The new law has allowed express examination of an application which was not provided for in the earlier law, thus making the registration process less time consuming. The first examination can now be conducted within 6 months in lieu of payment of a certain fees.

Under the earlier, if there were any mirror errors in a patent application, they could only be corrected through a re-examination. This would increase the cost as well as time duration of getting a patent registration. But the new law changes this procedure. Now, in case of minor errors in a patent application, the applicant may amend the defects according to instructions given by the examiner and thus making the overall registration procedure cost effective as well as time effective. The new law further reduces the cost of re-examination fee for minor errors from 5000AED to 2000AED for patent and 1000 for Utility model. 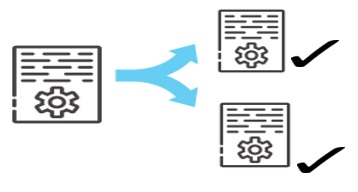 Under the earlier law, there were no provision for any final rejection of a patent application, due to which in cases, there were unlimited re-examination. But, the new law has expressly provided that after second re-examination, a final rejection can be made by the examiner if the examiner considers that the applicant has been given enough chance. By incorporation of this provision the MOE aims to reduce applications pending for long time and to provide legal certainty for applicants and for third parties as well.

The new patent law of UAE has brought about several historical changes with an aim to foster growth of patent applications in the country. Several express provisions with regard to procedural steps were unclear before under the old patent law of UAE which are now clarified and elaborated. The overall positive impact of the new patent law of UAE will be that now it will be more flexible, cost efficient and time saving to get a patent registered in UAE.