by Vladimir Sayenko , Andrei Liakhov and Konstantin Gribov
Sayenko Kharenko
Your LinkedIn Connections
with the authors

The adoption of the law "On the Natural Gas Market" in April 2015 started the harmonisation of the Ukrainian natural gas sector legislation, in line with the requirements of the Energy Community Treaty and the EU Third Energy Package. This new law, along with statutory instruments passed, simultaneously incorporats the principal rules of the EU's regulatory regime for the natural gas market into Ukrainian law.

The EU Energy Community approved these changes to the Ukrainian gas market regulatory regime by stating : "Ukraine managed to achieve an impressive record in transposing the Third Energy Package, thus becoming the first Contracting Party of the Energy Community with a significant developed regulatory framework of the natural gas market"1.

Many independent experts believe that the liberalisation of the Ukrainian gas market envisioned in this law provides new business opportunities in gas supply, transportation, storage, and production, as well as in the development of gas industry infrastructure.

In September 2016, the Ukrainian Parliament adopted the Law "On the National Commission for State Regulation of Energy and Public Utilities Sector" (the "Regulator Law").

The EU welcomed the adoption of the new Regulator Law stating: "The EU Delegation welcomes the adoption of a new Law on Energy and Utilities Regulator and the adoption, on first reading, of a draft law on the Electricity market. These are very important steps towards reforming the energy market in Ukraine and facilitating growth of the entire economy. The laws will create better mechanisms to protect consumer rights and reduce risks of corruption through higher transparency and market oriented pricing. They will ultimately lead to lower energy prices through increased competition and wider choice available for producers, businesses and final consumers.2"

The rent rates for hydrocarbon reserves are calculated as a percentage of the overall cost of extracted hydrocarbons. From 1 January 2015, Urals Mediterranean and Urals Rotterdam quotations (established by international agencies) were introduced as the reference value for the determination of the quantum of hydrocarbon rent. 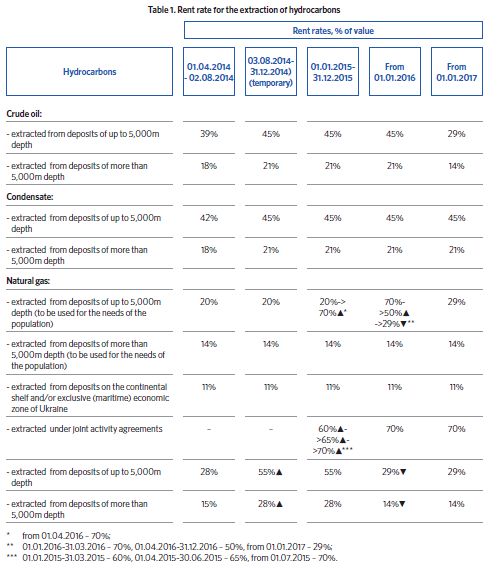 On 1 September 2016, Ukraine issued a letter of intent (the "Letter") to the International Monetary Fund ("IMF") which described the policies that Ukraine intends to implement in the context of its request for financial support from the IMF. According to the Letter, the Ukrainian Government considered the possibility of further amending petroleum taxation by the end of September 2016 with a view of establishing a flat royalty rate independent of the depth of the well, and introducing a CPT surcharge.

The Letter refers to the World Bank's model of resource rent tax, which is imposed only if the accumulated cash flow from the project is positive. However, to date, this change is not on a tax agenda in Ukraine.

Despite the 2020 National Energy Efficiency Action Plan (which complies with EU Directive 2006/32/EC) having been adopted by the Cabinet of Ministers in late 2015, Ukrainian regulation of energy efficiency issues is still far from being close to the EU regulatory regimes.

Privatisation in the energy sector

The Government plans to sell off 78.3% of its shares in energy production company Centerenergo, which operates three thermal power stations with a total production capacity of 7660MW, in the first quarter of 2017. The Head of the State Property Fund of Ukraine (the "SPFU"), Mr. Igor Bilous, confirmed that the SPFU may consider the separate sale of each of the three individual thermal power stations.

Six oblenergos (regional electricity supply companies) are in the process of being privatised. Their privatisation should be complete in 2017.

Another important process of the Ukrainian legislation reform to comply with the Third Energy Package is the draft law "On the Electricity Market of Ukraine" (the "Draft Law"). This Draft Law was adopted on 13 April 2017 by the Ukrainian Parliament and was expected to have been signed by the President and officially published (as of 12 May 2017 it is not happened yet). The EU experts believe that new law will facilitate the development of the electricity market in Ukraine in line with best European and global practices, open the doors for strategic investors, and provide the long-awaited starting point for the implementation of the reforms.3

This new law (if and when it is passed) will introduce a new model of the electricity market, which should replace the current "single-buyer market model", on 1 July 2019.

The main points considered in the new market model are:

The contracts market should function based on forward sales of contracts between market participants (producers, traders, distributors and end customers). Such trading is expected to take place over-the-counter.

The day-ahead market is a wholesale electricity market, where blocks of electricity are offered for next day delivery. It is centrally managed by a market operator acting as central counterparty for the purchase and sale transactions entered into in this market. Sales contracts resulting from the day-ahead market are between market participants and the market operator.

In the balancing market, the system operator is expected to carry out the purchase and sale of electricity by selecting offers from qualified market participants for the purposes of balancing the volumes of production, import, consumption and export of electricity, as well as managing any network outages and constraints.

In November 2016, a new entity responsible for gas transportation was created by the Cabinet of Ministers of Ukraine: Trunk Gas Pipelines of Ukraine (Magystralni Gasoprovody Ukrainy). Naftogas Ukraine will transfer all assets related to gas transportation to the new entity within 30 days of the decisions of the Arbitration Institute of the Stockholm Chamber of Commerce on the cases involving Naftogas and Gasprom coming into force (the final arbitral awards are expected to be delivered in first half of 2017). It is expected that the new entity, which will manage all underground gas storage facilities, will be established in 2017.

Public joint-stock company Ukrtransgaz has signed contracts on cooperation with TrailStone Energy LLC and DufEnergy Trading SA, based on which these companies will transport natural gas and store it in Ukrainian underground storage facilities.

It is been reported that TrailStone, DufEnergy and Engie (previously GDF Suez SA), which signed similar contracts with Ukrtransgaz in October, until recently sold gas to Ukrainian traders on the Ukrainian border.

Ukrtansgaz President Ihor Prokopiv has stated "we are actively working on attracting European traders to work on the Ukrainian gas market. We are waiting for pilot supplies in December."

The execution of these contracts should permit European companies to supply gas to Ukraine then directly sell it to Ukrainian traders and consumers.

Exploration and exploitation of gas reserves and resources

Although several PSA agreements were signed in 2013 with well-known international oil and gas companies, most of them pulled out of Ukraine in 2014/15 citing various, primarily economic, reasons for the move. Despite this setback, the Ukrainian Government still believes that Ukraine has substantial hydrocarbon exploration and development potential, which will be completed once economic and political conditions change.

In particular, in 2016 the Dutch based company Yuzgas B.V. (whose founder is Emerstone Energy, part of Emerstone Capital Partners) tried to enter into the PSA concerning the Yuzivka field, which has a total area about 8000 square kilometers (located in Donetsk and Kharkiv regions) and was the subject of Shell's 2013 PSA.

Yuzgaz B.V. won a tender in July 2016, but in November the Cabinet of Ministers did not approve the investment program of Yuzgaz B.V., and decided not to permit this company to participate in the PSA for the Yuzivska field.

Since 2012 there have been several attempts to raise finance and prepare project feasibility studies for LNG terminal construction projects. However, politics and the oil price crash prevented any of these plans from materialising. The Ukrainian Government remains committed to the idea of constructing an LNG terminal on its Black Sea coast as part of its energy security strategy, but it has no resources it can commit to this project at present. The realisation of any such project is further complicated by the lack of assured source of gas.

Solar Projects in the Chernobyl area

Mr. Shu Hua, the Chairman of GCL System Integration Technology ("GCL-SI") (a subsidiary of the GCL Group), said in a press release that his company, in cooperation with China National Complete Engineering Corp ("CCEC"), plans to build a solar power plant with over 1GW of solar power generation capacity in the exclusion zone around Chernobyl nuclear power station. Some experts put an estimated value of required investment at some US$1 billion (approx. €920 million). These Chinese companies have commenced the investigation into the site and available infrastructure.

Ukraine has recently conducted partially successful tests of non-Russian nuclear fuel: the results of the tests show that further work with Westinghouse and other international nuclear fuel suppliers is required to modify the Westinghouse products to fit Ukrainian reactors. In August 2016, Energoatom signed an agreement with British-German-Dutch Company URENCO to ensure the supply of enriched uranium, which will be used by Westinghouse for the production of the nuclear fuel for Ukrainian nuclear stations. The Ukrainian Government signed an agreement with the Government of Australia in order to secure this supply.

In addition, the Ukrainian Government is seeking investors for the development of its uranium reserves and resources, which were previously exploited in Soviet times. The IAEA estimates that Ukrainian uranium resources total 235,000 tons, which represents 1.7% of the world's uranium reserves. This is more than enough to supply all existing Ukrainian reactors for all of their operational life.

Cooperation will broaden in all areas, including energy efficiency and renewable energy, as well as creating more certainty for investors. The European Commission Vice-President for the Energy Union Maroa `efčovič said that "It is now time to expand our energy cooperation and attract more investment in all other areas of energy, including renewables and energy efficiency".

The Memorandum of Understanding foresees enhanced collaboration on a number of energy related issues, including energy security, full market integration, energy efficiency, the decarbonisation of the economy, and research. The Memorandum of Understanding covers an initial period of 10 years and will be implemented through annual priority work plans.