British Virgin Islands: The Offshore Industry In 2020: The BVI And The Rise Of Super Jurisdictions

by OIL Offshore Incorporations
OIL
To print this article, all you need is to be registered or login on Mondaq.com.

For the sixth year running, the BVI has been ranked the most important jurisdiction in OIL's flagship annual market study, Offshore 2020. This year, 320 industry leaders took part in the research to give their views on the current state of the offshore industry and the trends that will impact its future.

This reflects industry sentiment that by 2020, business will move towards midshore jurisdictions, which have traditional offshore benefits as well as onshore credibility. However, it is clear that the BVI and the Cayman Islands will continue to be fundamental to the offshore industry. 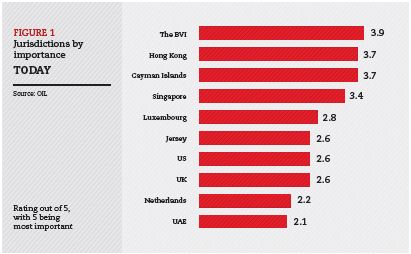 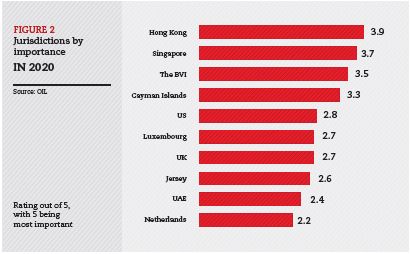 Hong Kong and Singapore are expected to drive future growth in the offshore industry because of the influx of wealth in Asia. In accompanying Offshore 2020 events, OIL Group Managing Director, Jonathon Clifton, has said, 'Non-tax-related demand drivers, such as wealth planning and asset protection, will increase due to the rise in wealth in Asian countries and a better understanding of wealth management solutions.'

The rise of super jurisdictions, defined as 'an originating geographical source of clients, a market where other clients go to conduct business and the jurisdiction itself of the entities that clients use', was another trend that emerged from this year's research. These super jurisdictions are considered contenders for usurping traditional offshore centres, such as the BVI, because they offer considerable benefits to clients.

Hong Kong, Singapore, London and Dubai all meet the criteria for super jurisdiction to some degree. All have a strong employee base, sound business, residential or travel infrastructure, and financial and legal services for clients. All are large cities or city states that now compete with offshore and midshore jurisdictions. Industry respondents believe this trend will continue over the next five years. 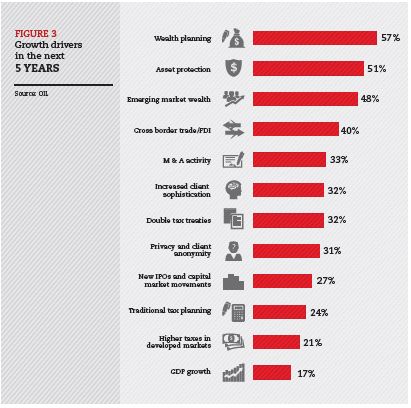 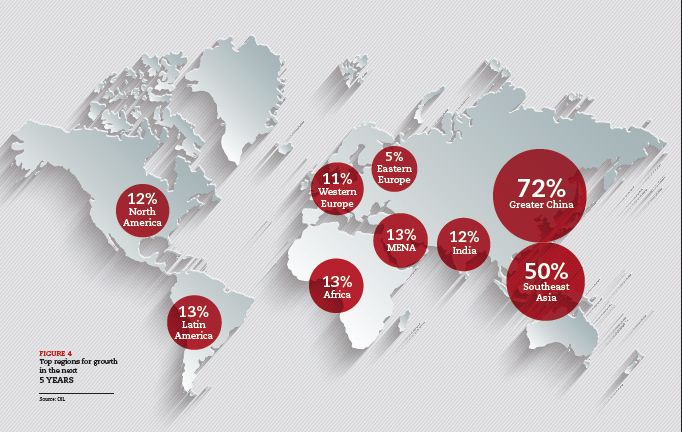 BVI EXPECTED TO REMAIN A SIGNIFICANT OFFSHORE JURISDICTION IN 2020

Although Greater China and Southeast Asia are identified as the top regions for growth through to 2020, the BVI will continue to be an influential offshore jurisdiction. Despite increasing competition from midshore or super jurisdictions such as Hong Kong, Singapore, Luxembourg, Delaware and the Netherlands, quality traditional offshore jurisdictions still have a significant hold in the industry and this will continue to be the case through to 2020.

OPTIMISM FOR THE FUTURE OF THE OFFSHORE INDUSTRY

While the industry faces challenges presented by regulatory initiatives, including the base erosion and profit shifting (BEPS) initiative, common reporting standards and the US's Foreign Account Tax Compliance Act, the survey shows the offshore industry remains positive about its future.

The regulatory environment continues to shift. Regulation that balances greater transparency with the need to support companies wanting to expand globally, will strengthen the offshore industry and bring it into the mainstream. However, regulation should enforce best practice within the industry, not seek to stamp it out.

Leading offshore jurisdictions, such as the BVI, offer investors modern, cutting-edge legislation; neutral venues that can be trusted by all parties involved in a transaction; and a tax-neutral environment that ensures profits are not taxed multiple times. Such jurisdictions have long served as neutral venues for companies to make cross-border investments, with their robust and familiar legal systems and professional infrastructure providing reassurance to investors.