Amongst other factors, the global dip in oil prices and the resulting economic recession in Nigeria has culminated in an increased focus on revenue generation through taxation in Nigeria. Following the mandate by the Federal Government, the Federal Inland Revenue Service (FIRS) intensified its drive for tax collection and has so far reported giant strides in its collection efforts. However, the tax-to-Gross Domestic Product (GDP) ratio has continued to hover around an abysmal 6% despite the reported tax revenue increase by the FIRS.

While the tax-to-GDP ratio is nothing more than the portion of a country's output (i.e. domestic product) that is attributable to tax receipts, it is one of the most widely used tools for measuring the efficiency of a country's tax system. Recent data from the National Bureau of Statistics indicates that Nigeria's GDP stood at ₦16.58 trillion in the second quarter of 2018 (Q2 2018) while the total government collection in taxes was barely ₦1.3 trillion in that quarter1.

In this newsletter, we have evaluated Nigeria's tax-to-GDP ratio vis-à-vis the metrics for determining the current the underlying factors for the going rate and proffered recommendations on how the tax revenue and the ratio can be improved.

However, low tax-to-GDP ratio is not an uncommon phenomenon with developing economies including Nigeria. Prior to the economic recession in Nigeria in 2016, the Nigerian GDP figures were rebased and the new figures were greatly celebrated as the news that the Nigerian GDP had grown to be the largest in Africa was widely published. Notwithstanding the reported growth, the tax-to-GDP ratio has remained at 6% which is even relatively lower when compared to other developing economies.

In certain studies conducted on the Indian economy, also a developing economy, certain factors were identified as contributing to low tax-to-GDP ratio. These factors include unorganized informal sector, narrow tax base, tax exemption and subsidy policies as well as loopholes in tax laws.2 We have discussed some of these factors as they apply to Nigeria below:

Undoubtedly, a small tax base places huge burdens on honest and compliant taxpayers. According to the International Monetary Fund (IMF), out of the Nigerian labour force of 77 million persons, only 10 million persons are registered for tax purposes3. This situation has adversely affected government's revenue generation through taxes. 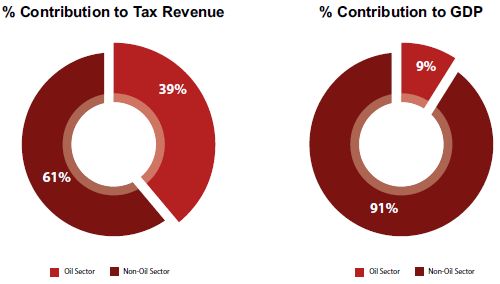 These figures reveal a mismatch in the revenue sources from the two broad sectors. If one sector, which contributes only 8.55% of the GDP reels in 39.26% of total government revenue in taxes, there is a clear need to further examine the nation's sectoral contribution to GDP while trying to ascertain government's focus for revenue drive and the plan to expand the tax base.

A casual overview of the tax-to-GDP ratio may not be useful for proper evaluation and improvement of the tax-to-GDP ratio in Nigeria. For the country to make real progress in maximizing the tax collection ratio, there would be a need for painstaking assessment of the contribution from each sector to GDP versus tax. Otherwise, the tax authorities may be left with no alternative than to continue in the traditional approach of seeking tax he same sources that generate the current tax-to-GDP of 6%.

According to the IMF in 2017, the informal sector contributes about 50% – 65% of Nigeria's GDP.5 This high contribution to the GDP does not translate to tax revenue for the government except players within the informal sector pay their taxes. Unfortunately, the tax authorities are still grappling with the appropriate methodology for capturing the informal economy for tax purposes.6 Also, the uncertainties that lurk around tax administration for the informal sector appear to be incentivizing the disposition of potential taxpayers who continue to operate below the tax radar.

Recent information from the National Bureau of Statistics reveals that agriculture contributes the highest percentage (22.86%) to GDP.7 However, the agricultural sector also enjoys a number of tax incentives in Nigeria while its contribution to government revenue in taxes is typically negligible. Again, this is a case of mismatch which impacts Nigeria's tax-to-GDP ratio adversely. Although there is a need to consider the buoyancy of each sector of the economy, it is equally important to pay attention to the contribution of each sector to government revenue (tax) vis-à-vis the GDP. As a matter of fact, there may be a need to disaggregate the contribution of each sector to tax revenue in proportion to their contribution to the national GDP in demonstrating the real picture of the tax-to-GDP ratio.

In January 2016, an inter-ministerial committee was constituted. The committee was tasked with undertaking a review of tax expenditures resulting from 52 types of incentives being implemented by the Federal Government through its agencies (Nigerian Customs Service, FIRS and Nigerian Investment Promotion Commission). The committee's preliminary findings indicated that between 2011 and 2015, the Nigerian government conceded ₦1 trillion (1.28% of GDP) to the granting of incentives such as import duty waivers/concessions/grants, Value Added Tax waivers/concessions/grants, and Pioneer Status. These estimates do not include incentives granted by government under existing laws such as the Companies Income Tax Act, Personal Income Tax Act, Petroleum Profits Tax Act, or the Minerals and Mining Act.8

Although tax incentives typically encourage investments, a recent survey conducted by the World Bank finds that it is not among the leading factors that influence foreign direct investments in developing economies. It is, therefore, important for the Nigerian government to constantly review its tax incentive framework to ensure that such incentives are recovered as revenue to the government in order for them not to be counter-productive to the overall wellbeing of the economy.9

Tax Reforms in Some Jurisdictions

To tackle the challenges facing its tax system, Georgia passed a revised Tax Code in 2004 which simplified its tax system, reduced rates and eliminated a series of minor local taxes. The revenue lost from lower tax rates was made up through a broader tax base, better compliance and stricter enforcement. The government also made it easier to pay taxes by introducing measures such as an electronic tax filing system. In this way, technology both improved the efficiency and reduced opportunities for corruption. By the year 2008, Georgia's tax-to-GDP had increased from 9% to 23.8%.10

Following the Rwandan conflict in 1994, Rwanda passed through several reforms to re-build its institutions. In 2003, the Rwandan Revenue Authority (RRA) introduced an e-Tax Information System which partially integrated the RRA's core processes. In 2005, a new income tax law was enacted and many exemptions were eliminated. The income tax law was further amended in 2012 to include a special tax regime for small and micro enterprises. Excise tax rates were reviewed in 2006 and more items were included in the list of excisable products. Over this period, tax administration was strengthened and taxpayer education was intensified as the RRA established a call centre to respond to taxpayer queries.

The tax reforms resulted in an increase in Rwanda's tax to GDP ratio from 9.6% to 13.4% between 2000 and 2013.11 This revenue increase came about due to improved legislation, strengthened tax administration, broadened tax base and improved compliance.12

Although there is no "one-size-fits-all" approach to tax reforms, the Nigerian tax system can take some lessons from the Georgian and Rwandan tax reforms and adopt certain measures to achieve a more efficient tax system. For Nigeria, the most impactful of these measures is probably the broadening of the tax base. To achieve this, there will be a need for the Nigerian Government to invest in taxpayer education, simplification of the tax system, and improved tax administration and legislation.

Specifically, the Federal Government may adopt practical measures such as the expansion of the tax base to cover the large informal sector including the digital and entertainment sectors and also give taxpayers payment terms to encourage compliance rather than enforcing additional collection from already compliant taxpayers through audits and other similar measures. The IMF has also recommended measures for improving the tax system such as a systematic review of tax expenditures that would help quantify the cost of incentives and identify ways to improve the fairness of the tax system and recover lost revenue. To achieve this, it will be necessary for the government to maintain a comprehensive database of taxpayers' records to undertake such assessment.

Furthermore, streamlining and simplifying the tax system will help to not only reduce the cost of doing business in Nigeria, but also increase the efficiency of revenue mobilization. For the informal sector, it will be most appropriate for the tax authorities to issue clear guidelines stating the modalities for taxation in the absence of supporting documents. This will clear a lot of uncertainties and encourage taxpayers to come forward to pay their taxes.

No doubt, transforming the stagnating tax-to-GDP ratio in Nigeria demands comprehensive review of the current tax administrative system and the overhaul of the Nigerian economy. Moreover, the measures highlighted above will go a long way in changing the rhetorics.

Nonetheless, it is unlikely that the tax authorities will adopt the sustainable measures for developing the tax system as they may continue to deplore more immediate and aggressive measures to shore up tax revenue. It is thus necessary for taxpayers who are already complying to take extra measures to ensure that their records are properly kept and contact professionals to conduct tax health checks where necessary to avoid surprises when the tax authorities attempt to review taxpayers records to identify additional tax exposures to make up the numbers.