The Federal Inland Revenue Service (FIRS or "the Service") has issued a Public Notice informing taxpayers of the termination of the reduced 7.5% withholding tax (WHT) rate applicable on dividends, interest and royalties earned by taxable persons resident in countries with Double Tax Agreements (DTAs) with Nigeria.

The FIRS noted that the termination follows the approval of the Honourable Minister of Finance, Budget and National Planning (HMoFBNP) to discontinue the unilateral application of a uniform 7.5% WHT rate deducted on dividends, interest and royalties earned by residents of its treaty partners under the DTAs with Nigeria. Consequently, effective from 1 July 2022, the applicable WHT rates on the above incomes will be the rates specified in the relevant tax laws, except where such rates exceed the maximum rate provided in the respective DTAs.

Based on the foregoing, the FIRS has issued an updated Information Circular No.: 2022/15 on The Claim of Tax Treaties Benefits and Commonwealth Relief in Nigeria ("the Circular"). The Circular, which replaces the FIRS Information Circular No. 2021/05 issued on 3 June 2021, retains the clarifications on available tax treaty benefits provided in the erstwhile Circular, and introduces additional information on the new applicable WHT rates, requirements for permanent establishments (PE) in Nigeria, and guidelines for the claim of Commonwealth Tax Relief (CTR) under Section 44 of the Companies Income Tax (CIT) Act.

We have provided below, a summary of the key aspects of the Circular and Public Notice:

The FIRS noted that the government policy statement on unilateral reduction of WHT rate to 7.5% contained in the 1999 Budget Speech was not promulgated into a Decree and published in the Official Gazette of the Federal Government. Consequently, there is no legal basis for the reduction of the applicable WHT rates to taxpayers resident in the treaty countries. Further, the FIRS argued that relevant protocols were not executed between Nigeria and the treaty partners to mandate any reduction in the WHT rates specified in the relevant DTAs.

Accordingly, effective from 1 July 2022, dividend, interest, and royalty payments will be subject to WHT at the rates outlined in the table below: 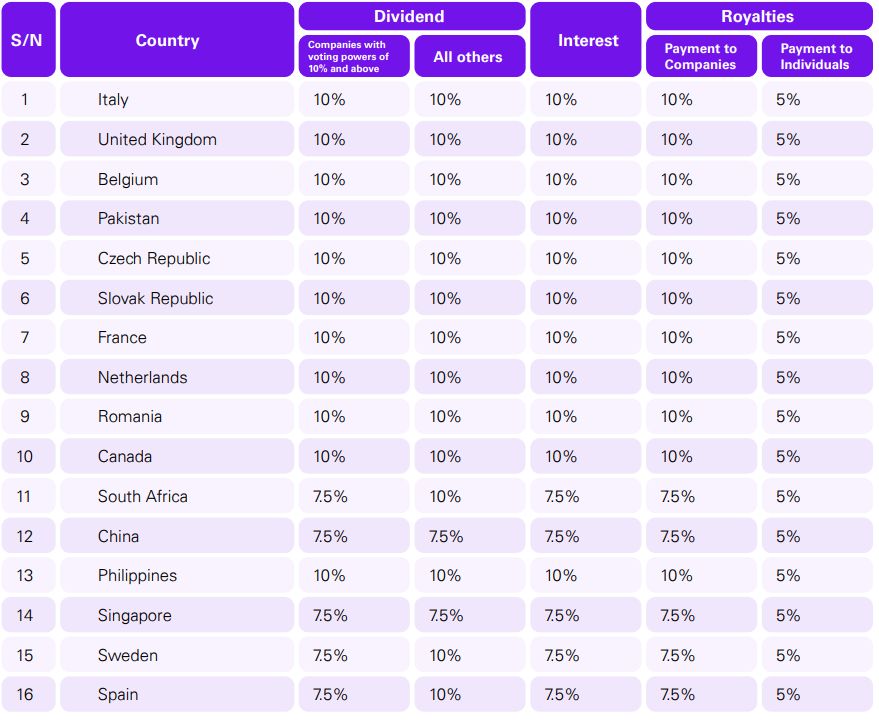 2. Requirement for PE before taxation in the Source State

3. Guidelines for the claim of CTR under the CIT Act

The Circular reiterates the provision of Section 44 of the CIT Act regarding the claim of CTR by Nigerian companies and NRCs that are liable to pay commonwealth income tax in any year of assessment. The Circular further outlines the conditions for the claim of the relief, including procedures for application for the relief.

Finally, the FIRS noted that any ruling, direction, or approval that has previously been issued by the Service on the applicable WHT rate under tax treaties is effectively withdrawn by 1 July 2022.

Commentary on reversal of the 7.5% concessionary WHT

Historically, residents of treaty countries enjoyed a lower WHT rate than the regular WHT rate applicable to non-DTT country residents and Nigerians. For instance, when the WHT rate was 15%, the concessionary WHT rate under the various prevailing DTTs then was 12.5%. The pronouncement by the then Head of State, General Abdusalami Abubakar, in the 1999 Budget, reducing the WHT rate to 7.5% under the DTTs to which Nigeria was a party, was on the back of reduction of the generally applicable WHT rate from 15% to 10%.

As with all pronouncements by the military Heads of State in the annual budget speeches, which were taken as law, the FIRS had faithfully implemented the 7.5% reduced WHT rate for residents of the affected DTT countries. This has been the case, notwithstanding the absence of a bilateral amendment of the treaties by Nigeria and her treaty partners, or codification of the change in the Finance (Miscellaneous Taxation Provisions) Decree (later Act) of 1999 and subsequent amendments of the tax laws. However, subsequent DTTs signed by Nigeria since 1999 reflect the 7.5% reduced WHT rate.

The reversal of the 7.5% reduced WHT rate, which the FIRS had administratively applied since 1990, will create a disparity between our pre-1999 and post-1999 treaty partners. To level the playing field, it is up to the affected treaty partners, whose residents will revert to 10% WHT rate with effect from 1 July 2022, to initiate negotiation with the Federal Government to codify the 7.5% WHT in their respective DTTs with Nigeria. This should also give the Federal Government the opportunity to renegotiate some of the treaty provisions, which the FIRS considers to be one-sided in favour of our treaty partners. Until then, the residents of the affected treaty countries only have a limited window until 30 June 2022 to enjoy the concessionary 7.5% WHT, after which the 10% WHT rate will become effective.