Most Popular:  Article Nigeria, February 2020
To print this article, all you need is to be registered or login on Mondaq.com.

The 2020 Appropriation Bill, "budget of sustainable growth and job creation", was presented by the President to the National Assembly on the 9th of October 2019 along with the draft Finance Bill (which has now been passed into law as Finance Act) which is intended to effect crucial changes to the existing fiscal laws that will enable the Federal Government increase its revenue generation capacity . The Appropriation Bill was signed into law by the National Assembly on the 5th December, 2019 and assented by the President on the 17th December 2019.

The Appropriation Act, which authorizes government expenditure for each financial year, took effect from the 1st January 2020 breaking a historical pattern of approval delays that had lasted about 2 decades (including the last 5 consecutive years) contrary to statutory budgetary calendar cycle provided in the constitution (Section 82.1). 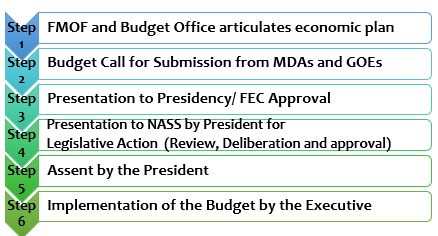 CORE OBJECTIVES OF THE BUDGET

The President in his budget presentation speech noted the underlisted as the key priorities for the Federal Government: 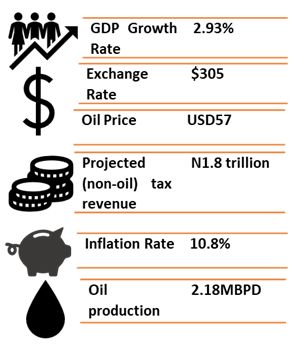 Historically, some of the fiscal assumptions underpinning the budget proposal fall short relative to actual performance. In 2018 for instance; the projected GDP growth rate was 3.5% whilst the actual rate achieved was 1.93%; oil production was 2.3MBPS whilst actual was 1.83MBPS. Inflation rate, exchange rate and oil benchmark rate however performed above expectation.

Many economic analysts have queried the projected GDP growth and oil production rates. We note that production reached its peak in June of 2019 with a record 2.3MBPD was at 2.3MBPD recorded in June, thereafter production declined and maintained a stable range of about 2.1MBPD for the rest of the year with relative calm in the Niger Delta region production. It is our opinion that the oil production assumptions are not overly optimistic, we also note, given the brewing crisis between Iran that the US price of brent crude may actually outperform the benchmark price. Where this is the case, many eyes will be on the Federal Government to see how it would manage/utilize the excess crude revenue.

Though passed by the National Assembly in November 2019; it was only assented by the president on the 13th January 2020. Inspite of the bouquet of tax and other incentives in the Act, the increase in the VAT rate from 5% to 7.5% which seems to have received significant backlash from the citizenry given the untold hardship it will cause in an already depressed economy.

The National Assembly, in the exercise of its oversight powers (under the constitution Section 81 and Section 18 (1)the Fiscal Responsibility Act effected a few statutory amendments to the budget (including a NGN3Billion increase to its own expenditure allocation) to cater for additional interventions in national security, road infrastructure, health and social welfare.


Key Elements of the Budget

The budget has an aggregate expenditure of N10.59 trillion shared primarily into debt servicing, recurrent expenditure, capital expenditure and statutory transfers. The budget (revenue and expenditure) framework is as follows: 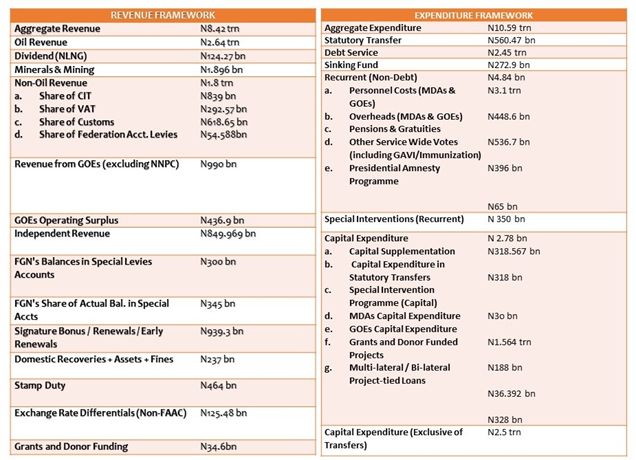 Based on the projected revenue framework the budget has a deficit of N2.28Trillion. This projection is based on a best case scenario assuming that revenue assumption parameters are accurate. Historically we have always recorded shortfalls in projected revenue which will materially balloon the deficit. The main revenue streams elucidated in the budget include; Oil revenue which is to generate N2.64 trillion, Non-Oil tax revenue which is estimated at N1.8 trillion and other revenue estimated at N3.6 trillion. The Minister of Finance, Budget and National Development, Zainab Ahmed, has noted the deficit would be funded with domestic and foreign debt. Whilst a detailed borrowing plan is yet to be submitted to the National Assembly for consideration and approval; the Minister has hinted the intention to seek only concessionary foreign debt at not commercial lending rate.

The early passage of the 2020 Appropriation Act is very impressive and has set the Government on a path to efficiency in fiscal management. Nonetheless, the early passage alone will not guarantee the successful implementation of the Budget. The Federal Government needs to:

WHAT INVESTORS AND BUSINESSES SHOULD EXPECT

It is proven that budget delays come at the cost of loss of Foreign Direct Investment and domestic investment lethargy. Record of slow economic and investment activities prior to passage of the budget underpin the importance of timely budget passage to economic activities. It is therefore visibly noticeable that unlike previous years many enterprises hit the road running in 2020 having sufficient information to chart the course of Government's economic plan, fiscal and monetary policy drive, from the budget. In comparable terms we expect the Gross Domestic Product growth rate in Q1 to outperform preceding years.

Given the Non-Oil Tax revenue assumptions of N1.8 trillion in the budget, it is expected that the Federal Government will pursue aggressively collection of tax income Principally VAT, Stamp duties and Company Income Tax by putting in place appropriate framework to harness the anticipated benefits of the Finance Act.

The Federal Government has indicated the revenue performance of Government Owned Enterprises and MDAs will come under heavy performance scrutiny as it will form a significant source of revenue generation outside oil In the presentation of the Budget, the President talked tough about the implementation of a new performance management framework that would regulate cost to revenue ratios for GOEs and MDAs noting further that there would be severe consequences for failure to achieve revenue target.

It is expected that the Federal Inland Revenue Service (FIRS), in turn with the pressure from the Federal Government to meet up with its revenue target will come heavy on tax offenders whilst incentivizing early tax remittance as provided for in the Finance Act. The new FIRS Boss, Muhamman M Mani, who took over from Mr. Tunde Fowler following the expiration of his tenure, noted in his acceptance speech that his mandate remains to Facilitate economic recovery through increased revenue generation".

To finance the budget deficit of N2.2trillion, the Federal Government has indicated that it intends to borrow a total of N1.92 trillion from the domestic and foreign debt market. It is expected that a total of N745Billion will be raised locally. The nations debt profile which stood at N25.7 Trillion as at half year 2019 is expected to grow to about N27.62 Trillion (recording a 128% increase in 5years). Despite concerns about the Nations debt profile, the Debt Management Office as assured that the Nation's debt to GDP ratio remains within permissible threshold.

It is expected that there will be a very conservative approach to the pricing of debt to be sourced by the Federal Government. Having stated clearly that the Federal Government will be seeking concessionary rates for its foreign borrowing it will not also be the usual for investors who may be taking positions to participate from local borrowings. Given the optics from the monetary policy rate it is expected that the rate of Government Bonds and Treasury bills to hit an all time low.

The projected oil production rate of 2.18 million barrels per day at the price of USD57 per barrel may be attainable especially considering recent tensions in the Middle East. However, the oil market remains very volatile and once relative peace returns to the region the current price escalation may revert. The Organization of Petroleum Exporting Countries (OPEC) in its December 2019 report projected that there would be a temporary glut in the oil market in the beginning of this year; where the current Iranian crisis abates therefore, we may experience a climb down in oil prices.

This Article was written by the research/market intelligence team at DealHQ Partners.