The notion of what constitutes "best practice" when it comes to prosecuting a patent application before any national patent office is necessarily subjective, and New Zealand is no exception. However, best practice in New Zealand has varied greatly over the past 4-5 years due to changes in legislation, precedent law, Patent Office throughputs, examination protocols and international/bilateral obligations all remaining somewhat fluid. This creates a real challenge for patent prosecutors to strike an appropriate balance between cost, scope and expediency, and this has remained a somewhat imperfect science. In this article, we play some of these factors (as they currently stand) off against each other – and come up with some ideas as to how attorneys and applicants alike can effectively manage the prosecution of New Zealand patent applications.

As readers may know, New Zealand patent law has changed relatively recently; on 14 September 2014, the Patents Act 1953 (the "old Act") was replaced by the Patents Act 2013 (the "new Act"). On the one hand, this creates a binary old Act/new Act distinction – and best practice differs appreciably depending upon which legislation applies. However, with only a few hundred old Act cases remaining and best practice largely self-governing, this article concentrates on new Act cases.

Applications filed in the Intellectual Property Office of New Zealand (IPONZ) on or after 14 September 2014 are subject to law and practice governed by the new Act (divisional applications filed from old Act cases notwithstanding). Generalising slightly – and with a few notable exceptions, new Act law and practice at the time of commencement was closely akin to life under Australia's Raising the Bar reforms of 2013. To some extent, this was a natural consequence of the now-abandoned Single Economic Market initiatives that took place between IP Australia and IPONZ around that time. Examination was now commenced by way of formal request, inventive step was examined, heightened support and written description standards applied, and Patent Office turnarounds were published, somewhat aspirationally, on the IPONZ website. In a nutshell, New Zealand practice was to become quicker, stricter – and as a consequence, more labour-intensive and ultimately more expensive.

Under the new Act, divisional applications still had to be filed pre-acceptance and in addition, a new 5-year statutory bar on requesting examination was introduced. However, due to the speed at which IPONZ was operating, this was unlikely to cause too many concerns.

As with the old Act, best practice under the new Act was effectively self-governing: IPONZ dictated the speed at which an application progressed through examination – and so long as a divisional was filed before acceptance of its immediate parent, the 5-year statutory bar was unlikely to raise its head for at least one further generation. As a consequence, attorneys didn't need to exercise a great deal of imagination in terms of how best to manage timelines (including the 5-year statutory bar) during the early days of the new Act.

Around mid-2016, things began to change again. For a variety of reasons, IPONZ started to fall behind and application pendency began to increase as a result. Now, the unavoidable significance of the statutory bar was that the five years commenced at the filing date of the application (or antedated filing date, generally the PCT filing date, of the eldest parent application). As IPONZ throughputs continued to slow, best practice moved from being largely self-governing to attorney-driven.

Fast forward to today. The backlog at IPONZ is now so deep that directions to request examination are no longer issuing at all. It now falls squarely on the shoulders of an attorney to keep an applicant apprised of the 5-year deadline and what is required of them within this period. Exemplifying passive attorney work (let's call it "worst" practice): An applicant, in the absence of a direction, instructs its attorney to request examination shortly before the 5-year deadline; an examination report issues 12 months later raising a unity of invention objection that would otherwise be addressed by filing a divisional application. The applicant, unfortunately, has nowhere to go as the 5-year bar has expired. Alternatively, if an obviousness (or any other) objection cannot be overcome within the 12-month acceptance period, the facility to maintain pendency via a divisional application has again expired. In such circumstances, an applicant really does rely on its attorney to actively look out for its best interests and come up with something a little more constructive than a passive prosecution strategy.

In the absence of proactive case management by its attorney, time can be a New Zealand patent applicant's worst enemy. If the applicant finds itself backed into a corner from which the only escape is a divisional application, they had better hope that the 5-year statutory bar has not yet expired. As readers will appreciate, slower, stricter examination in IPONZ only serves to heighten this possibility – and with it, the imperative that attorneys are proactive in managing the deadline.

Short of legislative reform to allow New Zealand patent law and practice to coexist, there appears no perfect solution. The only way to effectively tackle the 5-year statutory bar is for an attorney to be both vigilant and proactive in managing it.

As such, the required action is clear: encourage the applicant to request examination as soon as possible upon NZ national phase entry. This ensures that an applicant will receive, at least, a first examination report prior to expiry of the statutory bar – and as such, will have at least a pointer as to where they stand in relation to the need for a potential divisional application.

However, what is the perfect number? When should attorneys be reaching out to clients encouraging them to request examination? Of course, there is no right or wrong answer – only a very general "the sooner, the better". In the extreme, if an applicant requests voluntary examination upon entering the NZ national phase, there should be sufficient time (without rushing unduly) to begin prosecuting a second-generation divisional prior to expiry of the statutory bar. 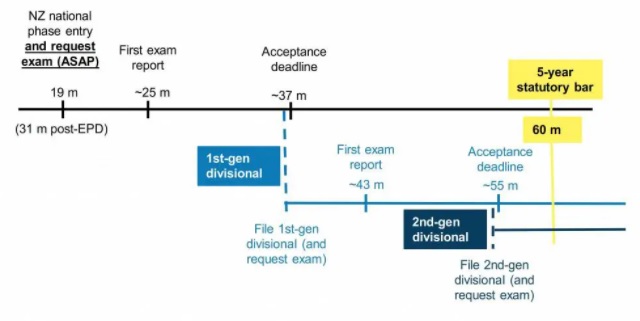 In the appreciably-rare cases where more than two divisionals are required, the applicant of course has the option of filing several at once. The take-home message is that despite its apparent rigidity, New Zealand practice is flexible enough to accommodate any number of prosecution strategies. It simply requires proactive case management on the part of the responsible attorney.

Is the 5-year statutory bar here to stay?

The New Zealand Government has foreshadowed that the 5-year statutory bar is not meeting its intended purpose and is mooted to be replaced with an alternative mechanism for restricting the filing of divisional applications. However, the exposure draft of the forthcoming Intellectual Property Omnibus Bill is already overdue. Allowing for the usual timeframes in passing and commencing new legislation, it is likely that the 5-year statutory bar will be a feature of New Zealand patent law for at least the next 2-3 years.

Any reasons why early examination might not be "best" practice?

Perhaps the most significant downside to early examination is that post-acceptance amendments in New Zealand are heavily restricted. Aside from correcting obvious mistakes, an applicant can generally only amend down (i.e., narrow) an accepted claim – you cannot broaden, and you cannot move sideways should a killer piece of prior art emerge after an application has been accepted.

Although readers will appreciate that this is, of itself, a good reason to delay, rather than expedite examination, it should be tempered with the observation that the majority of New Zealand applications come by way of the US or Europe, which generally means that high-quality searching will have been completed well before the counterpart New Zealand case is due for acceptance – even if examination is brought forward, as suggested.

With so many moving pieces to consider, any suggestion that what follows is "best" practice is perhaps a little presumptuous. Rather, we should only make the claim that we are suggesting "good" practice. To this end, even though such pieces will probably never synchronise, a proactive attorney can effectively manage the 5-year statutory bar for requesting examination and with it, mitigate any attendant risk by:

To conclude, if there is one thing to take away from this article, it is that these considerations are perfectly manageable – both individually and in sum. However, it requires an attorney who is in sync with the requirements and their limitations working in combination with an applicant who is prepared to prioritise, at least during the initial stages, a filing in what is likely one of the smaller jurisdictions they have elected to file. Whereas our personal preference is to request examination at the time of entering the New Zealand national phase, this must be offset against incurring costs that can always be deferred. As always, it's a case-by-case, client-by-client proposition – but it is eminently manageable.

ARTICLE TAGS
New Zealand Intellectual Property Patent
POPULAR ARTICLES ON: Intellectual Property from New Zealand
Can # Hashtags Be Protected As Intellectual Property In India?
Legacy Law Offices
In an ever-evolving era of digitization and mobile telephony, social media has become a quintessential platform for business development and marketing.
Internet And The Determination Of Jurisdiction In The Case Of Trade Mark Infringement
S.S. Rana & Co. Advocates
Internet has marked its presence in the commercial world in an unprecedented way. With businesses moving online to escalate their accessibility to a wider range of customers in the market, ...
Mastering intellectual property and online brand risks in 2023
Holding Redlich
The use of IP online continues to attract legal and reputational risk.
Assignment And Licensing Of Copyright
S&A Law Offices
Copyright is a protection given to the creators of certain types of works as an acknowledgment to their intellectual input
Can trade marks adequately protect digital fashion in the metaverse?
Bennett & Philp Lawyers
An increasing number of foreign decisions may cast light on the scope of trade mark protection in a digital world.
A Study On: Novartis AG v. Union Of India
Khurana and Khurana
Intellectual property is an intangible form of property while a ‘Patent' is a subset of intellectual property.
FREE News Alerts
Sign Up for our free News Alerts - All the latest articles on your chosen topics condensed into a free bi-weekly email.
Register For News Alerts
Article Tags
New Zealand Intellectual Property Patent
Similar Articles
Powered by mondaq AI
MATCH
71%
New Zealand best practice further influenced by impending rise in official fees Spruson & Ferguson
70%
How New Zealand patent applicants can beat the 13 February 2020 fee hike Spruson & Ferguson
48%
Is the daisy-chaining of NZ divisional patent applications about to get the glyphosate treatment? Spruson & Ferguson
46%
New Zealand's Patents Act 2013 – Local novelty is out (but was it ever really in?) Spruson & Ferguson
46%
Daisy-chaining of divisionals to be nipped in the bud following NZ Government review? Spruson & Ferguson
Related Articles
New Zealand Grants Software Patent For Electronic Tracking System Davies Collison Cave
Oatley Fails "Barista" Registration In New Zealand HFG Law & Intellectual Property
Māori Language Week 2022: What You Should Consider From An IP Perspective When Engaging With Indigenous Languages Davies Collison Cave
Moving goalposts on New Zealand patent best practice Spruson & Ferguson
The Existence Of "Zombie" Marks In New Zealand Forces Brand Owner Back To Court Davies Collison Cave
Mondaq Webinars
Considering the Nigerian Start-Up Act & The Opportunities for Tech
Oake Legal
A Guide for Business and Investors – The Sleeping Giant; Why is Nigeria the New Emerging Market for Global Business
Threshing Fields Law Practice
More Webinars
Comparative Guides
Environment and Climate Regulation
More Guides
Mondaq Advice Centres
Global
Trademarks in SAARC Countries
More MACs
Upcoming Events
Mondaq Social Media