The Hydrocarbon National Commission, or Comisión Nacional de Hidrocarburos (CNH), published on Dec. 17, 2015, the call for the fourth international public bid for Round One, as part of the implementation of Mexico's energy reform. The public bid consisted of 10 license contracts with 35-year terms for deep-water production of hydrocarbons covering a total area of 15,616.8 square kilometers (approximately 6,030 square miles).

On July 28, 2016, the CNH called an international public bid for the first farm-out of Petróleos Mexicanos Exploración y Producción (Pemex) to perform the exploration and production activities in the Trion field located in the Gulf of Mexico. This is the first time in Pemex history that the public company will develop a hydrocarbon project with the collaboration of the private sector.

On Dec. 5, 2016, the CNH awarded the Trion field public bid to BHP Billington Petróleo Operaciones de México and eight of the 10 license contracts for deep-water production. The following are the first- and second-place winners of the eight license contracts of the respective areas: 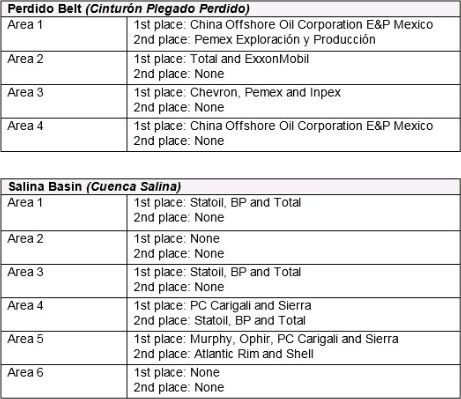