In Italy, different levels of government (20 regions, 103 provinces, over 8,000 municipalities) have land-use planning tasks assigned to them:

The Regional laws have introduced different names for the municipal masterplans. Here there are some examples: 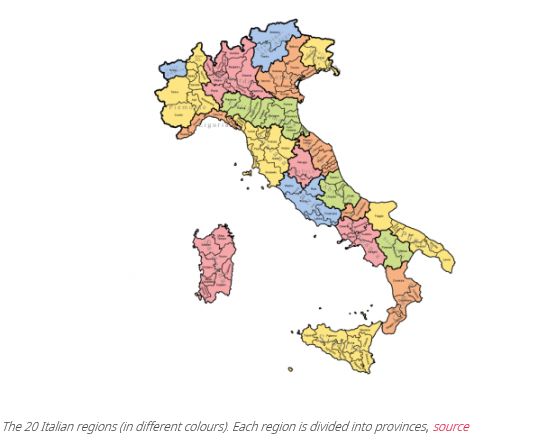 The municipalities are the central point in the definition of programmes for development and transformation of land and approve the General Town Planning Masterplan (Piano Regolatore Generale).

The General Planning Masterplan classifies the municipal territory into areas attributing to each of them different features, permitted uses and building characters. The decision-making power of each municipality to designate the areas and regulate the discipline applicable to them is very wide and discretionary.

The most common divisions of municipal territory are:


An example: The municipality of Milan

The following picture is a section of the North East Section of the Municipality of Milan, as ruled by the Plan of the Rules (Piano delle Regole) of the masterplan. 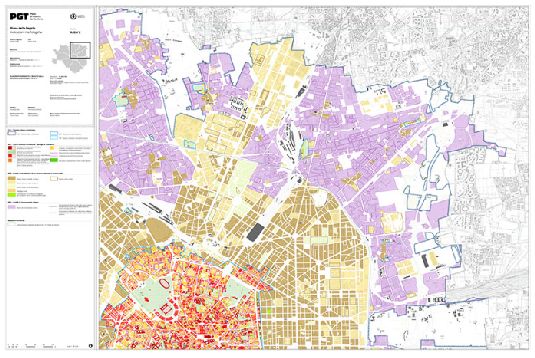 The zoning and building discipline is different for each area. The General Planning Masterplan regulates specific city planning parameters, such as the territorial and land utilization capacity, legal distances, building heights, compatible uses, etc., for each municipal area.

The General Planning Instrument Masterplan can also establish building limitations; it identifies the already built-up areas where relevant physical changes are not possible (only maintenance and restoration) or where more radical changes (such as demolition and reconstruction are forbidden). The General Planning Masterplan is approved by the Municipal Council. The approval procedure is settled by each Italian region: the main aspect of these procedures is the obtainment of the formal approval of the regions and of the provinces of the masterplan to the extent to have the check of the compliance of the municipal regulation with the goals of the territorial tools of these superior entities.

From zoning discipline to building activity

The General Planning Instrument Masterplan can be implemented in two main ways:

The Development Plan has to be approved by the municipality upon receiving a project plan concerning the entire area of development. Once it is approved, the owners enter into a town planning agreement (Convenzione Urbanistica) with the municipality, which rules on the obligations of the landowners concerning the way to develop the area (i.e. providing essential functions for use, such as the construction of utilities and the further infrastructure, such as sports fields, that allow the area to be used to full capacity).

ARTICLE TAGS
Italy Real Estate and Construction Construction & Planning
POPULAR ARTICLES ON: Real Estate and Construction from Italy
Government Announces £4 Million Boost For Relaunched Community Housing Fund
Wrigleys Solicitors
As part of its response to the Building Better, Building Beautiful Commission report.
Planning Relaxations For Commercial Property
Walker Morris
Last year, the Government announced it would be introducing fundamental changes to the planning system. The first of these changes came into force on 1 September 2020...
If You Have Always Dreamed Of Buying A House In Italy, What Are You Waiting For?
Giambrone & Partners
Italy has always been an extremely popular destination for both for summer holidays and as a retirement relocation.
How Covid-19 Is Impacting The Real Estate Market In Italy.
Luxury Law
Luxury Law has asked to its cooperators what they think about the property market and future outcome following the Covid-19 pandemic.
Extension Of Time, Delay Claims And Turkish Law Practice
Lexist Avukatlik Bürosu
Most of the projects, especially in construction contracts, face with delay and variety of disruptions and proving this delay is not easy for the parties since these projects are too complex...
Back To The Future For Housebuilding
Burness Paull LLP
There is an amusing meme circulating that depicts Marty McFly climbing into the DeLorean time machine extoling to Doc Brown "Take me to any year except 2020….!"
FREE News Alerts
Sign Up for our free News Alerts - All the latest articles on your chosen topics condensed into a free bi-weekly email.
Register For News Alerts
Article Tags
Italy Real Estate and Construction Construction & Planning
Related Articles
Buy Houses In Sicily For 1 Euro Luxury Law
How Covid-19 Is Impacting The Real Estate Market In Italy. Luxury Law
Элитная-недвижимость- В-Италии: Требования И Налогообложение Arnone & Sicomo
There Are Unique Opportunities Now For Buying A House In Italy Giambrone & Partners
Social Contact Responsibility In Real Estate Boccadutri International Law Firm
Mondaq Webinars
International Transfer Pricing Trends from a Swiss Perspective - Practical Tips and Lessons Learned
Tax Partner AG
Webinar Zurich Switzerland
Survival Kit for the Latest Trends in U.S Trade Enforcement
Braumiller Law Group, PLLC
Webinar Texas United States
More Webinars
Comparative Guides
Cartels
Corporate Tax
Enforcement of Foreign Judgments
FinTech
International Arbitration
Mondaq Advice Centres
Global
Trademarks in SAARC Countries
Global
Investment Immigration
More MACs
Upcoming Events
Mondaq Social Media