Energy storage in the electrical system consists of the accumulation of a certain amount of energy, produced at a given time, in order to be able to use it at a later time of need, both as final energy and as energy to be converted into another carrier.

Energy storage offers many opportunities in the residential as well as in the distribution sector. It namely allows:

Energy storage takes place through storage systems of various kinds, exploiting the various forms of mechanical, thermal, electrochemical, potential of a system to make available thermal or electrical energy at times when generating it is not possible (i.e. to compensate for inactivity of wind farms for lack of wind) or is less cost-effective:

In particular, electrical storage systems are used in 3 main sectors:

For this latter application, the main functions offered are:

Storage systems represent an added value in the field of energy production from Renewable Energy Sources ("RES"). Beside of that, when talking about RES energy systems some of their specificities shall be also considered.

The first is that, for many of them such as wind and solar, the non-accumulation in the primary form, therefore the variability, the randomness and being dependent site.

These characteristics make them difficult to manage and require compensation systems: therefore, nowadays the focus is on researching and using stationary management storage systems, i.e. fixed and connected to energy networks.

Very often, production from intermittent RES cannot be synchronised with its use. This implies the need to have compensation systems to overcome the time gap between energy production and its use.

Compensation can be carried out by storage systems, able to exchange energy at demand, or perfectly modular production systems of the same energy form, or hybrid systems, accumulation plus generation, very flexible and able to develop a compensation action in real time.

In fact, the electrochemical storage, in the Italian network, is mainly used to integrate RES and to increase flexibility of the network in the perspective of the implementation of smart grids2.

Particularly electrochemical storage has the potential to support the Italian national electricity generation system, but at the moment technological difficulties for replacing fossil fuels are still present and are connected to those characteristics (low accumulation, variability, randomness, dependent site and especially low energy density) that generally lead to plants of not very high power, larger construction dimensions compared to plants with fossil fuels of equal power, a low number of equivalent hours of production to the nominal power and efficiency of transformation of the form of energy not high, and construction costs of plants not at all competitive.

For this reason, although the capacity of storage systems in the world exceeds 125,000 MW, it is actually made up of 98-99% hydroelectric pumping plants.

However, the prospects for technological improvement and cost reduction suggests that other storage systems, and particularly electrochemical systems, will spread rapidly.

According to a report drafted by the Boston Consulting Group, storage systems for electricity generation could rise to 420,000 MW in 2030 and about half could be represented by electrochemical storage systems. This is about 280 billion of cumulative investments. 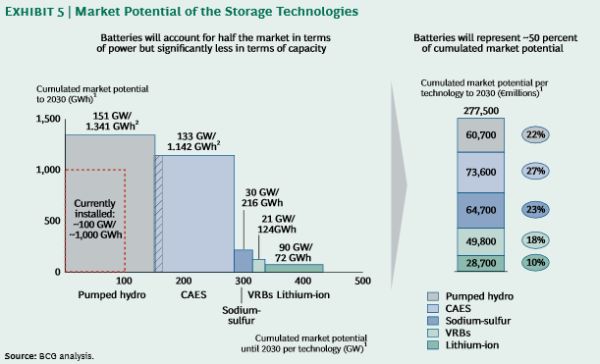 In Europe, although hydroelectric pumping systems remain the most widespread form of storage on the grid, from 2011 to 2014 other storage systems doubled and reached 1,500 MW: 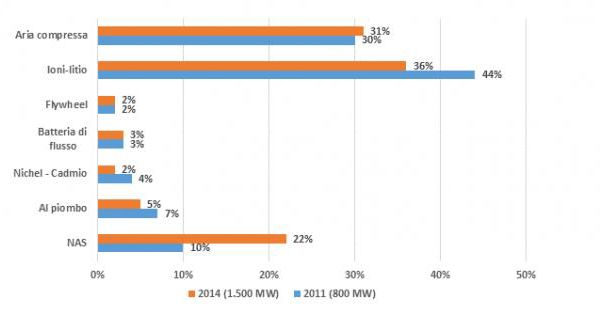 In Italy there are now about 56 MW of electrochemical storage plants, of which 56% is connected to the grid and mostly owned by Terna (50%) and Enel (30%). This is about one hundredth of the hydroelectric storage capacity in the large Italian basins (about 7,000 MW), which, however, have few possibilities for further development since the most suitable sites are already exploited and due to the significant environmental impact of this kind of technology.

In this perspective, the characteristics of flexibility, versatility and modularity make electrochemical storage one of the preferred solutions for the future.

The European Union has recognised the fundamental role of electricity storage for the sustainable development of the European system by including storage among the priority strategic technologies in the sense of the Strategic Energy Technology Plan ("SET Plan"), which sets out energy strategies for 2050.

The industry seems to have well understood the potential of this market and has seen the emergence of several players both for residential applications, particularly in combination with photovoltaic systems (ABB, SMA, Samsung, Tesla, Sonnenbatterie, BYD) and for applications on the grid (Siemens, Samsung, Toshiba, Fiamm, General Electric).

The Regulatory Authority for Energy, Networks and Environment (hereinafter "ARERA") has defined appropriate provisions aimed at allowing the integration in the Italian network of storage systems, defined as "a set of devices, equipment and management and control logic, functional to absorb and release electrical energy, designed to operate continuously in parallel with the network with the obligation to connect third parties or capable of causing an alteration of the exchange profiles with the electrical network (feed-in and / or withdrawal). Storage systems can be integrated or not with a production plant (if present). This does not include systems used in emergency conditions which, therefore, only come into operation when the power supply is interrupted for reasons beyond the control of the person who has access to them"4.

As a result, storage systems do not include those systems which only:

The Authority also stated that storage systems, being capable of exchanging electricity with the network, shall be treated as production plants or, in cases where they are installed at production facilities, as generation groups5.

3.1. CONDITIONS FOR THE INSTALLATION OF STORAGE SYSTEMS

Storage systems must be integrated into the energy network accordingly to the provisions related to connection services, transmission, distribution, measurement and dispatching of electrical energy provided by the resolutions of the Authority, as well as in compliance with the rules of the Italian Electrotechnical Committee ("CEI").

For the purposes of the installation of storage systems, the Integrated Text on Active Connections (hereinafter "TICA"), including the registration on the Management System of the Single Master Data of the Production Plants and related units ("GAUDÌ"), does apply.

In case of storage systems not connected with generation plants, the subject who requests the connection also performs the registration in Terna's GAUDÌ system upon presentation to the competent network operator a request for a new connection, in accordance with the TICA.

As foreseen by the reference regulation:

In case of storage systems installed to production plants for which admission to the incentives or special commercial schemes or guarantees of origin is requested, or in case of plants already benefiting from them, for the purposes of recognising and maintaining the incentives, special commercial schemes or guarantees of origin, only the power of the production plant where these systems are installed is considered (net, therefore, of the power of the storage system itself).

However, for photovoltaic systems with a power of up to 20 kW, operating in exchange on site and benefiting from the incentives under the DDMM of 28 July 2005 and 6 February 2006 (first Energy Account), the installation of storage systems is not compatible with the provision of the incentives themselves.

Access or maintenance of the incentives, as well as the benefits provided by the Decrees and Resolutions of reference, is allowed only after the correct installation and activation of the appropriate measuring equipment, if necessary pursuant to Resolution 574/2012/R/eel and TIME6 to quantify the energy produced, the energy fed into the grid and the energy absorbed and released by storage systems, as certified by network operators.

The GSE reserves the right, however, to adopt specific measures for the remuneration of electricity withdrawn by the same GSE and fed into the network. With regards to this, it should be noted that:

5. However, this interpretation conflicts with Commission Regulation (EU) No 2016/631 of 14 April 2016, which, in regulating the scope of application relating to the regulation of generating groups, expressly states in Article 3(2)(d) that "This Regulation shall not apply to energy storage devices, with the exception of pumped storage generating groups".