by Eleanor Harding
Appleby
Your LinkedIn Connections
with the authors

As many readers involved in the aviation industry are aware, by August 20161, all non-commercial operators of complex aircraft having their principal place of business or residence in European Aviation Safety Agency (EASA) Member States (and, crucially, both EASA and non-EASA registered aircraft) will have to comply with the Part-NCC European regulations.

The EASA requirements titled Part-NCC (non-commercial operations of complex motor-powered aircraft) propose a division of regulatory responsibility between the State of Registry and the State of the Operator. Having attained the new International Civil Aviation Organisation (ICAO) Annex 6 Part II requirements for their State of Registry, the operators of aircraft established or resident in an EASA Member State may also need to meet the additional Part-NCC requirements set out in Annex IV to Regulation (EC) No 216/2008. 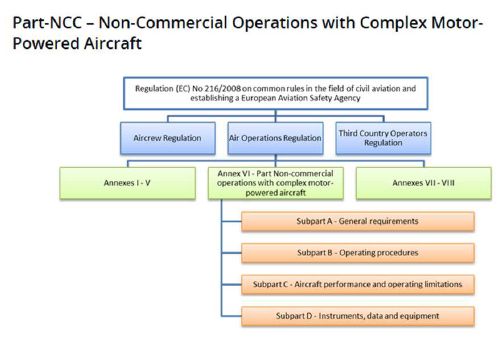 IN PRACTICAL TERMS, HOW DOES PART-NCC AFFECT AN OWNER OF AN ISLE OF MAN REGISTERED AIRCRAFT?

The focus of Part-NCC is on the "operator" of an aircraft. Article 3(h) of Regulation (EC) No 216/2008 defines an operator as "any legal or natural person, operating or proposing to operate one or more aircraft". On analysis of the factual position surrounding operation and management of an aircraft, this wide definition can be applied to a number of people involved in the day to day operation of an aircraft and can include pilots, aircraft managers and even the owner. Whoever is deemed to be the operator of an aircraft has full legal and regulatory responsibility for the aircraft in general and on each flight.

Owners of aircraft registered on the Isle of Man Aircraft Register (IOMAR) may opt to employ the services of a professional operator who is the holder of an Air Operator Certificate (AOC).

The Isle of Man is not part of the European Union (EU) and EU law does not extend to the Isle of Man except in limited circumstances. Part-NCC regulation will apply to aircraft registered on IOMAR if the operator (whether a professional AOC holder or otherwise) is resident in an EASA Member State.

If the aircraft is not operated by a professional operator (who is an AOC holder or otherwise), responsibility for the safe and proper operation of the aircraft will default to the owner. Owners or operators of aircraft registered on IOMAR that are established or reside outside the EU, and those established or reside in a non-EASA State will not be affected by Part-NCC regulation.

What steps should an owner of an aircraft registered on IOMAR who employs the services of a professional operator resident in an EASA Member State take to protect their position?

1. Examine your management or operation agreement to ensure that all responsibility for the operation of the aircraft is comprehensively delegated to the professionally engaged operator.

2. If the agreement governing the relationship between owner and operator is that of a management agreement, and the term 'manager' is used in place of 'operator', this should not cause immediate concern if the manager is contracted to perform the functions of the operator in line with the Article 3(h) of Regulation (EC) No 216/2008 definition.

3. Look out for all clear references which provide for an owner retaining operational control of an aircraft.

4. An example being: "It is expressly understood and agreed that CUSTOMER shall retain operational control of the Aircraft for all flights of the CUSTOMER on the Aircraft".

5. Care should be taken to identify less obvious references such as an owner retaining the right to approve all crew employed by the operator.

6. One such example being: "All crew employed by OPERATOR shall be approved by CUSTOMER and must be replaced upon CUSTOMER'S request"

7. A further example: "CUSTOMER shall bring to the attention of OPERATOR any maintenance or operational issues related to the Aircraft that become known to CUSTOMER during the Term of this Agreement."

8. Request to see the declaration made by your professional operator which states that they fulfil the Part-NCC obligations and assume responsibility and liability for their operations.

9. Request confirmation as to whether the professional operator has been audited and / or inspected by the relevant competent EASA States authority in the operator's jurisdiction.

1. With certain countries requiring earlier declarations – for example - France have declared that third country resident aircraft have to declare their existence by 25 August 2015.

3. laying down technical requirements and administrative procedures related to air operations pursuant to Regulation (EC) No 216/2008.

ARTICLE TAGS
Isle of Man Transport Aviation Wealth Management Offshore Financial Centres
POPULAR ARTICLES ON: Wealth Management from Isle of Man
The British Virgin Islands TIEA With India Comes Into Force
Appleby
On 22 August 2011 the Tax Information Exchange Agreement ("TIEA") between the British Virgin Islands ("BVI") and India came into force.
Rights Of A Discretionary Beneficiary And Liabilities Of The Trustee
Walkers
The rights of a beneficiary under a discretionary trust are more difficult to identify than those of a beneficiary with a fixed interest.
The Cyprus International Trusts
Patrikios Pavlou & Associates
The concept of the trust as we know it in our days dates back to the Crusaders in the 12th Century and is based on the Anglo-Saxon legal system.
Key Benefits Of Using BVI Structures
Harneys
Companies incorporated in the BVI are, by most measures, the most popular offshore holding structure in the world
For Love Nor Money?... A Guide To Trustee Fees, Expenses And Service Agreements
Appleby
Trustees' fees and expenses are frequently a source of disputes with beneficiaries, the settlor or successor trustees.
What Guernsey Can Offer Chinese HNWIs'
GuernseyFinance
In September 2015, the Hurun Research Institute published its annual listing of the richest people in China. It showed that IT tycoon Ma Yun had increased his personal fortune during the last year by 500% to $25 billion.
FREE News Alerts
Sign Up for our free News Alerts - All the latest articles on your chosen topics condensed into a free bi-weekly email.
Register For News Alerts
Article Tags
Isle of Man Transport Aviation Wealth Management Offshore Financial Centres
Related Articles
Foundations And Their Practical Application In The Isle Of Man Simcocks
Who Wants To Be A Billionaire?! DQ Advocates
Features Which Make Isle Of Man Foundations Attractive Asset Protection Vehicles Dixcart
Use Of A Guernsey Or Isle Of Man Family Investment Company To Hold UK Assets Dixcart
Fintech 2018 Appleby
Mondaq Webinars
Global Investigations During the Covid 19 Pandemic
The Law Offices of Panag & Babu
Webinar New Delhi India
Patent Filing, Prosecution, and Enforcement in India
LexOrbis
Webinar New Delhi India
More Webinars
Mondaq Advice Centres
Global
Investment Immigration
Global
Trademarks in SAARC Countries
More MACs
Curated Content
A Different Perspective To Employer`s Liability For Anti-Competitive Behaviors: Arçelik's Application For Leniency
ELIG Gürkaynak Attorneys-at-Law
Losing The Battle, Winning The War? – Ramifications Of The Newly Introduced Settlement Mechanism Under Turkish Competition Law
ELIG Gürkaynak Attorneys-at-Law
Upcoming Events
Mondaq Social Media