New procedures for approving capital reductions are set out in the Companies Act 2014, which came into operation on 1 June 2015. A capital reduction is the means by which a company can reduce its capital in order to, among other things, create distributable reserves or return surplus capital to its members. Capital reductions can now be carried out, in certain cases, without seeking High Court approval, using a new Summary Approval Procedure. Where this procedure is not permitted or appropriate, High Court approval is required.

The Summary Approval Procedure is a straightforward two-step procedure.

Second, the company's members must pass a special resolution approving the capital reduction.

This procedure is not available to PLCs, which must obtain High Court approval for any proposed capital reduction.

OPTION 2: APPROVAL BY THE HIGH COURT

Where the Summary Approval Procedure is not, or cannot, be adopted, the company must apply to the High Court to have the resolution approving the capital reduction confirmed.

Under section 85(2) of the 2014 Act, before applying to the High Court, notice of the passing of the special resolution approving the capital reduction must first be:

Given that PLCs, or other large private companies, may have a large number of international creditors, the requirement to notify all non-Irish creditors may prove to be a substantial undertaking.

No further advertisement or notification of the passing of the resolution is required. However, the High Court will generally require that the date and time fixed for the final hearing of the application also be advertised, so that any interested parties (such as a company's creditors) can attend and object to the application if they wish. Therefore, a company may be required to advertise twice – first, when the special resolution approving the capital reduction is passed and, second, after the High Court has fixed the final hearing date for the application. Depending on the particular creditor base of the company in question, this may involve placing advertisements in a number of international newspapers. While the prudent approach is to always advertise the passing of the resolution before any initial directions hearings, in line with what is envisaged by the 2014 Act, the High Court has, in a number of recent applications, demonstrated a willingness (by reference to the particular circumstances of the company in question) to permit a single, combined notice (combining notice of the passing of the resolution and of the final hearing date) to be placed after the initial directions hearing.

The High Court (Barrett J) considered the notification requirements in the recent decision of Permanent TSB Group Holdings PLC v McManus & Others. The Court noted that the purpose of section 85(2) is to alert creditors to the passing of a resolution in respect of the proposed capital reduction and of the intention to apply to the High Court for confirmation of that resolution. It is not to protect company members, who should have been notified of the proposal to adopt the resolution, and who had the opportunity to attend and vote at the meeting at which the resolution was adopted.

Furthermore, the High Court noted that non-compliance with the advertisement and notification requirements does not invalidate any procedures or steps taken afterwards. Rather, imperfect compliance is something the High Court will consider in setting directions in respect of the final hearing of the application.

The Court noted that there is, in any event, an element of "in-built" non-compliance in section 85, as "creditors move and the post fails". Barrett J stated that it therefore must be the case that the law expects good faith, and substantive compliance with the notification requirements of section 85(2), rather than proof that every single creditor to whom a letter was sent continued to reside at the relevant address, and actually received the letter.

FACTORS TO BE SATISFIED

Barrett J reiterated that the High Court has discretion in relation to whether or not to approve a capital reduction, and identified a number of factors that must be satisfied before a proposed capital reduction will be confirmed:

CAPITAL REDUCTIONS IN IRELAND UNDER THE COMPANIES ACT 2014 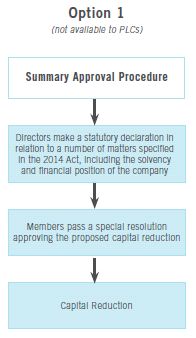