Welcome to our annual review of debt securities transactions that listed on the Irish Stock Exchange (ISE). In this bulletin, we provide a flavour of the transactions which kept us busy in 2015 highlighting the variety of debt products and the international spread of issuers choosing Ireland as their preferred listing venue.

Listings in 2015 and emerging trends

2015 was a challenging year in many respects for the DCM and securitisation industries particularly with reference to the regulatory and legislative hurdles faced by certain asset classes together with world economic events. That said, 2015 was a strong year for Walkers listing team and we were pleased to act on a wide variety of debt securities transactions and to experience growth across a number of debt products. We were also excited that 2015 delivered industry awards to some of the transactions on which we acted.

Euro and U.S. CLOs – While the CLO market has undoubtedly faced a number of challenges in 2015, we were pleased to act as listing agent on a significant number of U.S. and European transactions, with an aggregate value of over US$6.1 billion and €3.2 billion, respectively, listing on the ISE. Interestingly, the majority of U.S. deals continue to list on GEM while the Euro CLOs tend to express a preference for the regulated market.

Sovereign Eurobonds – 2015 was a strong year for eurobond sovereign issuance and Walkers was pleased to act for countries including Armenia, Ghana, Jordan, Macedonia and Namibia. The eurobond market has proved to be a valuable and essential funding tool for a significant number of emerging market nations and we expect to see continued investor demand for this product in 2016.

Programmes – 2015 brought a number of new programmes our way offering a variety of debt products including MTN programmes, sukuk, covered bond and ABS programmes. We regularly act on programmes which originate from jurisdictions including Asia, Europe, Middle East, Scandinavia and beyond. It is also worth noting that some programmes will seek a dual listing with another international exchange.

Debt Capital Markets & High Yield – We represent a number of high profile clients who list their corporate debt securities on the ISE and in 2015 we noted that a majority of our clients chose the GEM as their preferred market. During 2015 we acted for a variety of businesses including waste management, broadcasting & telecommunications, banking, property development, real estate investment, and mortgage providers.

RMBS – 2015 was a successful year for RMBS deals and we were pleased to assist on a number of transactions in this sector. According to market sources the success of the RMBS market, particularly in the UK and The Netherlands, can be partly attributed to the "high quality securitisation" stamp that has been afforded to certain securitisation transactions, including RMBS. We expect to see further appetite in the RMBS space heading into 2016.

ABS – During 2015 we acted on a broad spectrum of asset-backed transactions including catastrophe bonds, auto loan receivables and loan repackagings. We note that European regulators, central banks and securitisation stakeholders are working to agree a framework for simple, standard and transparent securitisations which should inject growth and confidence in the securitisation field. Looking ahead we expect to see positive growth in the number of public securitisation transactions in 2016.

European CMBS – Continuing a trend established in 2014, we noted significant activity in the Italian CMBS space in 2015 with additional activity from The Netherlands, United Kingdom, Germany, Belgium, Ireland and France. We noted a strong mix of retail, office and hotel portfolios spanning the transactions on which we acted. Market sources predict 2016 issuance may reach €5-€10 billion and we are pleased to have a number of deals in the pipeline.

2015 saw Walkers take home a number of awards in recognition of the high-profile and strong calibre of transactions on which we acted. Some award-winning deals included:

Acted as Irish listing agent and Cayman legal counsel to OETC in connection with its US$1 billion note issuance understood to be the largest international capital markets issuance out of Oman and winner of the 2015 Sovereign/Quasi- Sovereign Financing Deal of the Year.

Acted as Irish listing agent and Cayman legal counsel to Dubai Aviation Corporation in connection with its US$500 million debut capital markets Sukuk transaction and finalist in the 2015 Bond/Sukuk Deal of the Year by a Debut Issuer.

Acted as Irish listing agent and Irish legal counsel on a €680 million commercial mortgage backed securitisation (CMBS) transaction understood to be one of the largest European CMBS since the financial crisis, and winner of the Finance Dublin 2015 Debt Capital Markets ABS/Securitisation Deal of the Year. 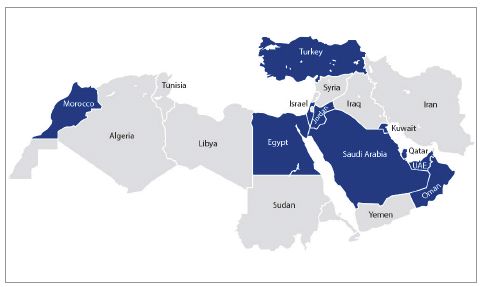 We are introducing a new feature to our annual bulletin where we provide a snapshot of listings activity from a specific region of the world. In this edition we take a look at the MENA region and the variety of debt securities transactions listing on the ISE.

Our map highlights the jurisdictions from which ISE-listed deals have originated and we expect to see the attractiveness of an ISE listing spread even further in 2016.

The scope of MENA transactions on which we regularly act includes MTN programmes, corporate debt, high yield, sovereign debt and Eurobonds. We also frequently list Shari'ah compliant structures, particularly Sukuk transactions, each of which have listed on the Main Market of the ISE.

It is also worth acknowledging the variety of industries and sectors from the MENA region that are now familiar with listing in Ireland e.g. real estate/property development; banking; energy; pharmaceuticals; telecommunications.

Our Dubai office has been active in the region for over 10 years and provides fully-integrated Cayman legal, corporate and fiduciary services which, when coupled with our Irish listing services, effectively offers a one-stop-shop for our clients. Please click here for further information on our experience and services offering in the MENA region.

As we face into 2016 we acknowledge the challenges faced by the capital markets in terms of turmoil in certain emerging market economies, uncertainty in China, falling oil prices and general macro-economic events. However, such circumstances can also create funding requirements for corporates, financial institutions and governments and we predict capital markets products serving as an effective and efficient funding tool to meet such demands.

From a European perspective we expect to see continued efforts to enhance securitisation products and anticipate increased confidence and demand for such transactions. We will also keep a close eye on developments relating to the European Capital Markets Union and discussion papers on proposed changes to the Prospectus Directive (such proposals referred to as PD III).

2016 has started strongly for Walkers with a number of transactions already closed and listed including a catastrophe bond, euro CLO, corporate debt and a number of U.S. CLOs. As the strength and profile of an ISE listing continues to be internationally recognised, we expect a busy 2016 for our listings team.