This article is about the Basel Committee's June 2020 proposed technical amendment to the securitisation rules relating to the capital treatment of securitisations of non-performing loans. Those professing a certain agility with the Committee's Bistro mathematics1 may wish to skip to the final section – The New NPL Rules. For the rest of us, we have attempted to provide some basic context below.

So far this year we have penned a number of articles covering the European Commission's regulatory regime for securitisation, consisting of Regulation (EU) No 575/2013 on capital requirements (the CRR), Regulation (EU) 2017/2402 (the Securitisation Regulation) and Regulation (EU) 2017/2401 amending the CRR (CRR Amendments Regulation and together with the legislation referred to above, the EU Securitisation Regime). We have emphasised the role that the Commission has given to securitisation in causing and deepening the global financial crisis (GFC) a dozen years ago as the context of many aspects of the EU Securitisation Regime. However, it is fair to say that most all legislation passed in Strasbourg and Brussels for the regulation of securitisation takes inspiration from the banks of a Swiss stretch of the river Rhine. The Basel Committee on Banking Supervision (BCBS) is a committee of banking supervisory authorities originally established by the central bank governors of the Group of Ten countries in 1974. The BCBS now has 45 members from 28 jurisdictions, consisting of central banks and financial regulators in each of them. The Committee's Secretariat is located at the headquarters of the Bank for International Settlements (BIS) in Basel. The business of securitisation is so intimately bound up with proceedings at the BCBS that executives reputedly named JP Morgan's 1997 ground breaking US$700m Bistro bond, the first synthetically funded collateralised debt obligation (CDO), after the Secretariat's host.

As a supranational body without legislative authority in the jurisdictions of BCBS members, BIS regulatory frameworks are not law. Nevertheless, rules made by the BCBS have generally been adopted swiftly and largely wholesale across developed economies, particularly in North America and the European Union. This accords with the intention of BCBS members to avoid damaging regulatory arbitrage between their respective jurisdictions. Accordingly, the EU Securitisation Regime is based fairly and squarely on the Basel Securitisation Framework summarised below.

The GFC prompted a root and branch examination by the BCBS of its regulatory capital regime for financial institutions in its member jurisdictions. This fundamental review resulted in a framework that was adopted in December 2010 and further revised and refined thereafter for a post-GFC capital regime accord (Basel III) establishing more stringent regulatory capital / own funds requirements and new minimum liquidity thresholds for banks.

Basel III represents an evolution of the risk-based capital regime adopted as the Basel I accord in January 1992 and Basel II in 2007. The basic principal underlying all three accords is that banks be required to reserve less capital against low-risk exposures while higher-risk exposures require more capital to be reserved against potential losses. The risk associated with a financial institution's exposure to a particular asset is assessed by application of a risk weighting specified in the accord for the asset class to which it belongs.

Specifically, Basel III established financial coverage ratios requiring banks to maintain certain minimum amounts of capital (or to use the CRR term, own funds) to total risk-weighted assets (Capital Ratios), a certain minimum of capital to total assets (leverage ratio), and require banks to have high-quality investments and access to stable funding to meet their short-term and long-term funding obligations, i.e., sufficient liquidity. The Basel III Capital Ratios represent more stringent limits and a number of other adjustments to reflect the BCBS's developing analysis of the GFC. For example, the minimum required common equity Tier 1 capital (essentially common stock or ordinary share capital, CET1) that banks are required to reserve is 4.5% (plus a 2.5% additional capital conservation buffer for European credit institutions) of total risk-weighted assets; the required ratio of all Tier 1 capital instruments to total risk-weighted assets including the capital conservation buffer is 10.5% and the total Tier 1 and Tier 2 capital (primarily common stock and certain preferred shares and subordinated debt) to risk-weighted assets (Equity Ratio) is 12.5%.

A risk weighting is a percentage assigned to various specified asset classes and exposure types applied as a multiplier to the relevant Capital Ratio to determine the amount of capital effectively required to be reserved for that particular position. These percentages generally range from 20% to 1,250% (or a deduction from CET1) translating to a minimum own funds requirement for a €100mm asset / exposure of €2.5mm and €100mm, respectively. Certain off-balance sheet or contingent liabilities allow application of an additional multiplier, referred to as a conversion factor, further reducing the amount of capital that needs to be held against the exposure.

A Hierarchy of Approaches 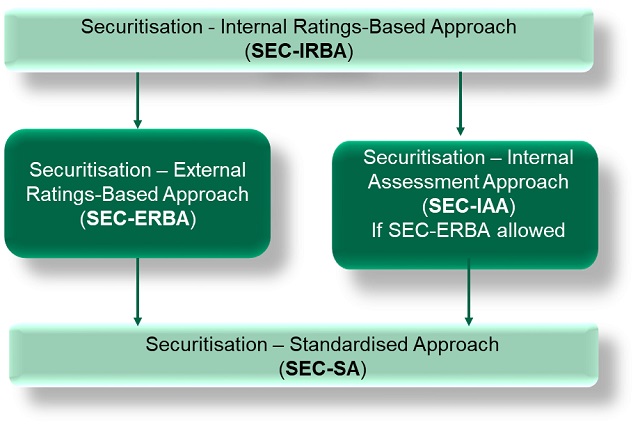 The Basel Securitisation Framework has the Securitisation - Internal Ratings-Based Approach (SEC-IRBA) at the top of the hierarchy of approaches (see Figure 1, the Basel Hierarchy). To use the SEC-IRBA, banks must have a supervisory-approved (i.e., in the case of European credit institutions, approved by their national competent authority (NCA)) internal ratings-based (IRB) model for the type of underlying exposure in the securitisation pool and sufficient information to estimate the capital charge for these underlying exposures. This key bank-supplied input is denoted KIRB, which is the risk-weighted capital requirement for exposures assessed under the IRB model.

For some financial institutions (including many investment managers) the SEC-IRBA may be unavailable. This could be because the regulator does not consider that its risk management function has reached the required level of sophistication for the asset class. Or perhaps it has insufficient expertise and data relating to the type or geography of the assets in the pool. In these circumstances, the investor may consider application of the SEC-ERBA, based on the credit ratings awarded by external credit rating agencies to the particular tranche under consideration. In the EU, the credit rating agencies and award of the rating must be compliant with the European Commission's 31 May 2013 amending regulation making several significant changes to the existing Credit Rating Agencies Regulation (EC) No 1060/2009. 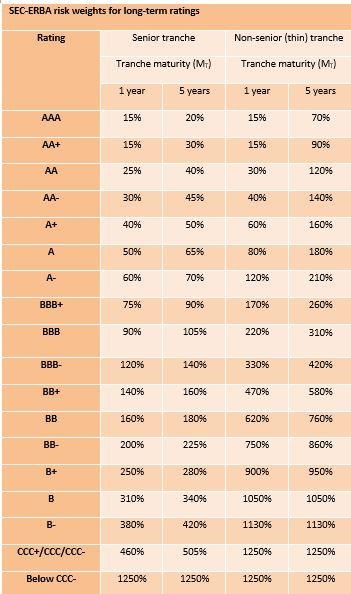 The risk weight percentage is modified for the maturity or MT, of the securitisation position (see our article: https://www.dilloneustace.com/legal-updates/its-a-wonderful-weighted-average-life. Where MT falls between 1 and 5 years, a linear interpolation between the two applicable risk weights is used. Tranches with an effective maturity longer than five years are treated as having an MT of 5.00. The long-term SEC-ERBA risk weights are also modified for tranche thickness. For non-senior tranches (broadly, that are not the most senior tranche of securities in the transaction), the risk weight is further modified for tranche thickness by applying the following formula: 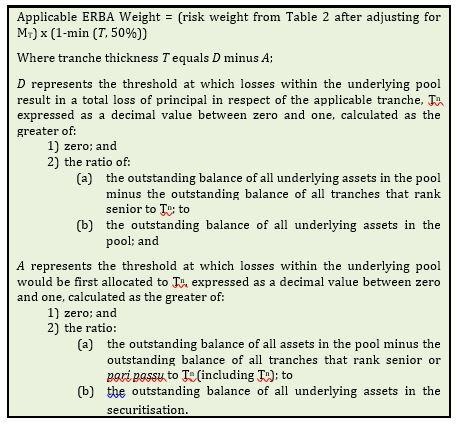 If neither of the SEC-IRBA or the SEC-ERBA (SEC-IAA in the case of asset-backed commercial paper (ABCP) positions) can be used because Tn has no recognised credit rating and it is not possible to infer one from ratings of other tranches subordinated to Tn collateralised by the same pool, then the bank will need to move down the Basel Hierarchy to the standardised approach (SEC-SA). SEC-SA applies a risk-weight based on the underlying capital requirement that would apply under the standardised approach for non-securitisation credit risk, and other risk drivers. In principal therefore, the SEC-SA is even more conservative than the SEC-ERBA, because it ignores credit risk mitigation features inherent in securitisation structures such as the portfolio effect and credit enhancement and liquidity support provided by subordinate tranches. 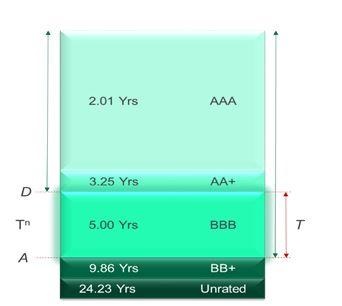 If none of the approaches in the three levels of the Basel Hierarchy can be used, then the financial institution must assign a risk-weight of 1,250% to the securitisation position. 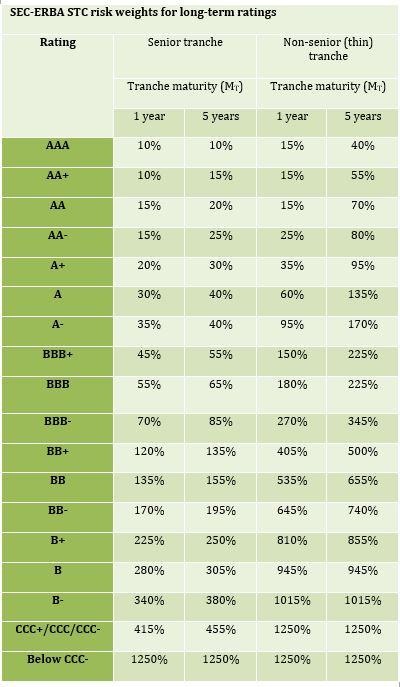 Notably, Annex 2 to the Basel Securitisation Framework sets out limited homogeneity, underwriting and other criteria for the securitised pool as well as those for the interest basis of securitised assets. Nonetheless, in the EU, the bulk of requirements for origination and valuation, interest rate and other hedging, granularity, document disclosure, transparency and reporting and the like are left to the STS criteria in the EU Securitisation Regime. Remarkably, the STC criteria contemplate commercial mortgage-backed securities (CMBS) transactions that are compliant, whereas the STS criteria exclude them completely. At the moment, both sets of criteria exclude synthetic securitisations (see: https://www.dilloneustace.com/legal-updates/is-synthetic-securitisation-about-to-be-brought-in-from-the-cold).

The BCBS is proposing that the NPL Rules be implemented by member jurisdictions by no later than 1 January 2023, which could be mistaken for the distant future. However, the BCBS has invited comments on the draft NPL Rules linked above no later than 23 August 2020, so there is a limited timeframe for stakeholders to react meaningfully. Nevertheless, in the current economic climate and with Basel's bistros still subject to COVID-19 restrictions, this is a welcome and comforting initiative.

1 See The Hitchhiker's Guide to the Galaxy, by Douglas Adams