Creditors will soon be able to obtain a court order allowing them to freeze their debtors' bank balances in other EU member states. Creditors will further be able to request information on debtors' accounts in other member states. This is the result of a regulation establishing the European Account Preservation Order (EAPO), which will enter into force on 18 January 2017. The scope of the EAPO is limited to civil and commercial matters. It applies in all EU member states except for the United Kingdom and Denmark.

The EAPO provides two methods for a creditor to improve his position regarding his debtors in cross-border matters:

Significantly, the EAPO does not affect the Dutch system for cross-border protective attachments. Creditors can therefore continue to enjoy the benefits of the Dutch system, which, in several respects, is more creditor-friendly than the EAPO and systems for protective attachments in other European countries. Notwithstanding the EAPO, a creditor can still apply to a Dutch court for a Dutch attachment order. At the same time, creditors can benefit from the new opportunities offered by the EAPO, in particular the prospect of obtaining a debtor's account information. This is a measure that was previously not available in the Netherlands. A notable similarity between the EAPO and Dutch law is that the debtor will not be heard on the application for the protective attachment. The debtor will only be notified after the attachment is in full place.

The main differences between the system of protective attachments under Dutch law and under the EAPO are contained in this schedule. 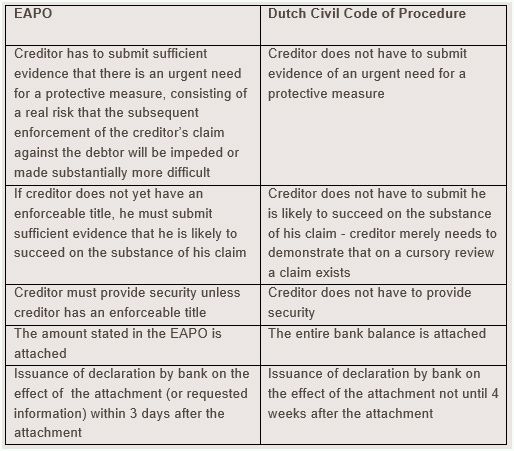 ARTICLE TAGS
Netherlands Insolvency/Bankruptcy/Re-structuring Insolvency/Bankruptcy
POPULAR ARTICLES ON: Insolvency/Bankruptcy/Re-structuring from European Union
Trade Alert: Switzerland
Brown Rudnick LLP
14,081 businesses and individuals in Switzerland filed for bankruptcy in 2021, according to the Swiss Statistical Office, marking a 9.1 per cent increase compared with 2020.
Legal Guide To Pre-Enforcement Steps Under Jersey And Guernsey Law
Walkers
In September 2020, only months into what we now know was to become a two-year Global Pandemic, we looked at what Covid-19 might mean for businesses and their creditors.
New Law Journal: Overview Of Restructuring In The Channel Islands
Collas Crill
In the last of a three-part series on Jersey and Guernsey law in the New Law Journal, Senior Associate Karen Stachura provides an overview of restructuring procedures available in the Channel Islands...
Winding Up Order Made Despite The Existence Of Earlier Proceedings In Germany (Barings (UK) Limited And Ors v Galapagos SA)
Gatehouse Chambers
Dispute Resolution analysis: The High Court has granted an application to wind up a company incorporated in Luxembourg in a decision which sheds light on the application of cross-border insolvency principles...
Improving Debt Recovery – Publication Of CSSF Circular 22/819
Luther S.A.
Regulation (EU) No 655/2014 of the European Parliament and of the Council of 15 May 2014 (the "Regulation") establishing a European Account Preservation Order procedure...
Holders Of Bonds Issued By Tuspark Organise Bondholder Group
Withers LLP
Holders of the bonds issued by Tuspark Forward Ltd ("TusPark") are organising a bondholder group to represent their interest in an expected restructuring of US$400 million 7.95% guaranteed bonds due 2024 ...
FREE News Alerts
Sign Up for our free News Alerts - All the latest articles on your chosen topics condensed into a free bi-weekly email.
Register For News Alerts
Article Tags
Netherlands Insolvency/Bankruptcy/Re-structuring Insolvency/Bankruptcy
Similar Articles
Powered by mondaq AI
MATCH
71%
Pre-Judgment Attachment Of Bank Accounts Across Europe Soon Cheaper And More Efficient De Brauw Blackstone Westbroek N.V.
44%
The Dutch Scheme Has Arrived Jones Day
Related Articles
Recent Developments In The International Restructuring Market From A Dutch Law Perspective Loyens & Loeff
The Dutch Scheme Has Arrived Jones Day
The Dutch Scheme: A Valuable Addition To Cross-Border Restructuring Toolbox Jones Day
WHOA – das Insolvenzrecht auf neuen Wegen Dentons
Seminal Decisions On The Transfer Of Undertakings And Works Council Consultation In Insolvency Situations Jones Day
Mondaq Webinars
Future Series: Cybersecurity and Ransomware Trends
Fasken
Employer Responsibilities and Employee Rights in Australia
People + Culture Strategies
More Webinars
Comparative Guides
FinTech
Labour and Employment
More Guides
Mondaq Advice Centres
Global
Trademarks in SAARC Countries
More MACs