by Parveen Arora
BTG Legal
Your LinkedIn Connections
with the authors

The Supreme Court of India ("SC") has recently passed an order relating to laying of power transmission lines in the states of Rajasthan and Gujarat, in an environmental public interest litigation.

A group of environmentalists in 2019 had filed a writ petition in the nature of public interest in the SC, to seek protection and conservation of the Great Indian Bustard ("GIB") species. It was contended that GIBs are on the verge of extinction due to their death caused by collision and/or electrocution with the overhead power transmission lines and wind turbines.

After hearing arguments of both the sides, the SC had passed an order on April 19th, 2021 ("SC Order") directing the relevant authorities of the Rajasthan and Gujarat government to (i) install all future power lines as underground power lines and (ii) convert all existing overhead power lines to underground power lines, subject to feasibility (as indicated in the below flowchart), in the priority and potential habitat area ("GIB areas") of the GIB, which has become rare due to the above and other reasons.

The SC Order can be accessed here. 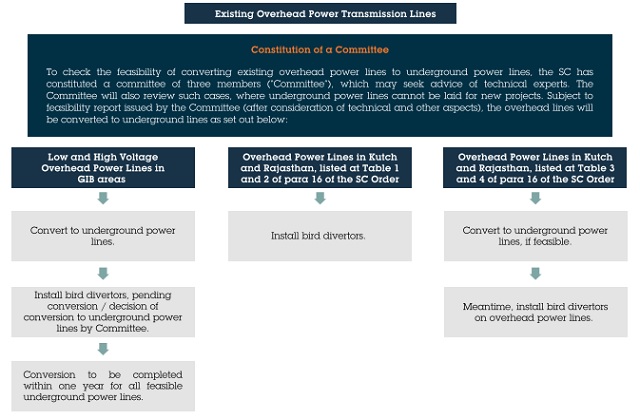 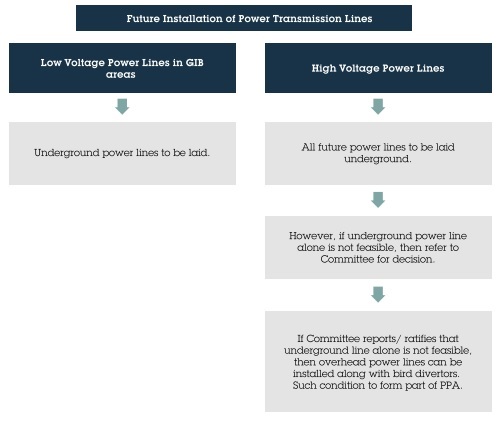 What this means for you:

As mentioned in the SC Order, an underground high voltage power line will have many challenges like (i) high cost; (ii) high downtime to repair any failed cable; (iii) non-availability of cables at 765 kV level; and (iv) increase in the number of joints with length of run. In addition to this, operation and maintenance cost will also be higher for underground high voltage cables (as compared to overhead power lines). The SC has suggested some mitigation factors also for the increased cost, which can be taken into account by new projects.

However, for the projects which have already been won or submitted their bids by taking into consideration overhead power lines, the implementation of the directions contained in the SC Order will be challenging. Apart from mitigations suggested by the SC (such as corporate social responsibility, utilization of wildlife conservation fund etc.), such projects can look for respite under "Change of Law" clause in respective power purchase agreement with SECI, which modification will further require approval of the Central Electricity Regulatory Commission or as set out under relevant bid documents.