Product packaging and visual impression of any product which is to be launched in the market, has become one of the most decisive factors regarding how well the product will attract the attention of the prospective consumers. Over decades there has been a transformational shift in the choices of the consumer; today along with the quality, the overall packaging of the product has also significantly affected the buying choices of the consumer. Packaging, color pattern, color combination,  shape of the product, texture, design, graphics and illustration which we call as trade dress are protected from being misused by the other parties who intends to imitate the overall look of a product in order to take advantage of its established goodwill and reputation. In India there is no separate provision for protection of trade dress, however, the common law of passing off provides protection of trade dress consisting of shape of goods their packaging and combination of colors etc. which is elucidated in Section 2 (zb) of the Trademarks Act 1999. In order to qualify for protection, the overall appearance or image of the product has to be distinctive either having inherent distinctiveness or acquired distinctiveness. While extending protection to the right holders in order to protect their trade dress, the Courts have taken into account various factors rather than simply applying the conventional methods of looking into a dispute through the prism of trade mark infringement only. In 2017 the High Court of Delhi and Bombay High Court have delivered orders/judgments which would add on to the earlier cases defining common law pertaining to protection of trade dresses. 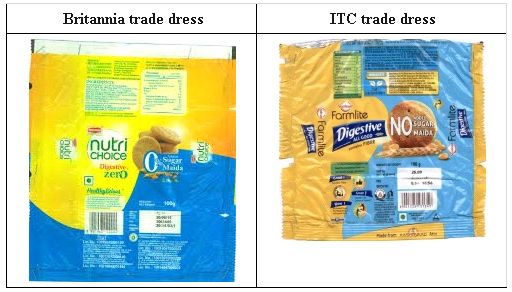 In one of the cases pronounced by the Division Bench of Delhi High Court where the dispute in the suit related to rights claimed by ITC in the yellow and blue packaging of Sunfeast Farmlite Digestive All Good Biscuits and contested that, Britannia have copied a similar color trades dress for its product Nutri Choice Digestive Zero Biscuits. The Single Judge while ruling in favor of the ITC observed that within the short span of time, the product of ITC has acquired popularity which was very evident from the sales of the product.

Aggrieved by the said order Britannia filed an appeal before Division Bench  who subsequently reversed the order of Single Judge by making the following observations: a) the get-up of the yellow and blue combination of the packaging did not attain distinction and therefore was not exclusively and distinctively associated with the ITC; b) ITC mainly relied on its trade mark and trade name in their advertisements; c) the court did not agreed with the Single Judge's view that within such short span of time, the yellow-blue packaging of ITC biscuits had become so associated with ITC so as to enable it to prevent its use by its competitors; d) Court further opined that distinctiveness is acquired in get-up when it is not only novel but also possesses some striking feature. In the present case, the get-up and specifically the yellow-blue combination of packaging of ITC did not fall into that category of distinctiveness. The matter is still pending before the Supreme Court and has been adjourned sine-die for exploring settlement.

Another proceeding where the issue of trade dress was discussed last year was the case of Pidilite Industries Limited Vs Poma-Ex Products before Bombay High Court. Although, the core issue dealt by the court was the infringement of the Plaintiff's mark "FEVIKWIK" by the Defendant's mark "KWIKHEAL", but the question of trade dress also played a significant role in reaching the conclusion. 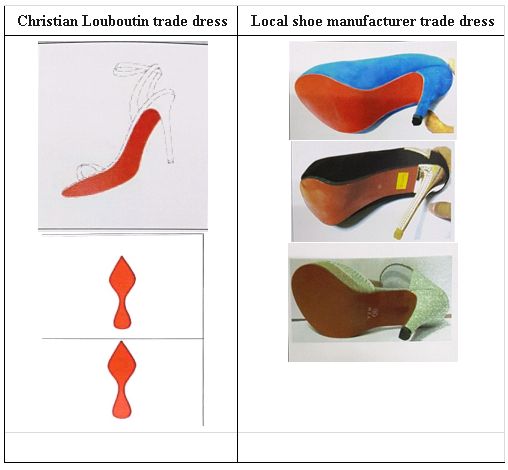 The issue of infringement of trade mark "Red Sole" pertaining to high end luxury shoe brand of famous designer Christian Louboutin was in question in Christian Louboutin Sas Vs Mr. Pawan Kumar & Ors.- CS (Comm.) 714 of 2016 in which the Delhi High Court declared the designer's 'Red sole' a well-known trademark. In this case it was argued by the Plaintiff that the shoe with red sole clearly identifies Plaintiff's product distinguishing it from others. The 'RED SOLE' trademark has thus become the signature of the plaintiff. The trade mark "Red Sole" has registrations in different jurisdictions including India and simentianously it enjoys a trans-border reputation by virtue of various factors. It has also got spilled over reputation in India from various other countries as the consumer across the globe are well aware of the goodwill and reputation of the mark even before it was formally launched in India. The Defendants in the suit were local shoe dealers manufacturing and selling the shoes with the red sole thereby infringing the trade mark of the Plaintiff. The Court, thus after looking into the material evidence led by the Plaintiff permanently injuncted the Defendants from manufacturing, selling or in any way dealing with the footwear bearing the Plaintiff's registered trade mark for "Red Sole" and simultaneously awarded damages in favour of the Plaintiff. This is also the first instance in India where any Court has declared a trade dresses as a well-known status. 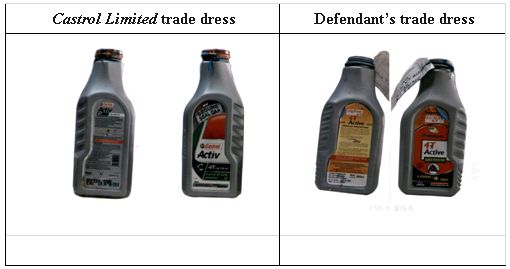 Early this year, in M/s Castrol Limited & Anr. Vs Iqbal Singh Chawla & Anr.- CS (OS) 4 of 2011, the Castrol Limited sued the Defendants who were involved in selling 4T oil under the trade mark "Lumax Active" who were said to have infringing the trade mark "Castrol Active" which was separately registered in the name of Castrol Limited. Castrol Limited, the Plaintiffs here claimed relief in relation to its trade dress, copyright in packaging, including the shape of the container of the bottle. The Plaintiffs' case was that the Defendants have copied the exact trade dress, shape of the bottle, label lay-out and colour scheme of the Plaintiffs which amounts to infringement of trade mark, copyright as well as makes a case of passing off. The Court opined that if there is a comparison between trademarks "Castrol Active" of the Plaintiff and "Lumax Active" of the Defendant, there does not appear to be any deceptive similarity between the marks if it is seen in isolation of the trade dress, colour scheme, packaging, design, layout, shape and configuration. Thus, the moment when the rival trademarks are examined in conjunction with the trade dress, colour scheme, packaging, design, layout, shape and configuration, it becomes evidentially clear that adoption of the trade mark "Active" by the Defendants is clearly a dishonest adoption to encash upon the goodwill and reputation of the Plaintiffs. In this said case though the Court found that the rival marks were different the dishonesty of the Defendants lied in adopting the exact same trade dress. The Court however added that the said injunction will not affect the right of the Defendants, if the Defendants use the word "Active" in completely different trade dress, colour scheme, packaging, design, layout, shape and configuration.

Today the market is exploding with the different types of products available in the market, be it retail shops, malls or online shopping forum, where the multiplicity of products makes the choice of the consumers based on recall by memory difficult. For the same reason today, the colour schemes and product packaging play an indispensable part in finally arriving at the decision regarding the choice of the product in the market. Courts have taken due care in attributing the growing importance to not only the trade marks but also to the overall look of the product which is known as trade dress.

ARTICLE TAGS
India Intellectual Property Trademark
POPULAR ARTICLES ON: Intellectual Property from India
Internet And The Determination Of Jurisdiction In The Case Of Trade Mark Infringement
S.S. Rana & Co. Advocates
Internet has marked its presence in the commercial world in an unprecedented way. With businesses moving online to escalate their accessibility to a wider range of customers in the market, ...
Can # Hashtags Be Protected As Intellectual Property In India?
Legacy Law Offices
In an ever-evolving era of digitization and mobile telephony, social media has become a quintessential platform for business development and marketing.
Assignment And Licensing Of Copyright
S&A Law Offices
Copyright is a protection given to the creators of certain types of works as an acknowledgment to their intellectual input
A Study On: Novartis AG v. Union Of India
Khurana and Khurana
Intellectual property is an intangible form of property while a ‘Patent' is a subset of intellectual property.
Patent Infringements And Their Types
S&A Law Offices
Patent is one of the most important forms of Intellectual Property (IP). The term of a patent is typically 20 years from the Priority date of the application.
No Bar On Filing Infringement Suit Against Registered Trademarks And For Passing Off
LexOrbis
Recently, in the matter of Good Life Industries v. J R J Foods Pvt. Ltd. C/AO/10/2021...
FREE News Alerts
Sign Up for our free News Alerts - All the latest articles on your chosen topics condensed into a free bi-weekly email.
Register For News Alerts
Article Tags
India Intellectual Property Trademark
Similar Articles
Powered by mondaq AI
MATCH
47%
Intellectual Property Updates From India IndusLaw
42%
"SWISS MILITARY" With Or Without + Cannot Be Registered In India – Rules The Delhi High Court Anand & Anand
48%
No Bar On Filing Infringement Suit Against Registered Trademarks And For Passing Off LexOrbis
75%
Developing Jurisprudence On Trade Dress S.S. Rana & Co. Advocates
71%
Castrol Wins Trademark Infringement Case S.S. Rana & Co. Advocates
Related Articles
Exports Under The Bolar Exception: A Key Arrow In The Indian Generics Quiver Obhan & Associates
It's A Wrap! Intellectual Property Round-Up 2022 G&W Legal
Swiss Military Trademark Case Khurana and Khurana
PhonePe vs DigiPe Khurana and Khurana
Can # Hashtags Be Protected As Intellectual Property In India? Legacy Law Offices
Mondaq Webinars
Considering the Nigerian Start-Up Act & The Opportunities for Tech
Oake Legal
A Guide for Business and Investors – The Sleeping Giant; Why is Nigeria the New Emerging Market for Global Business
Threshing Fields Law Practice
More Webinars
Comparative Guides
Alternative Investment Funds
Artificial Intelligence
Aviation Finance
Aviation Regulation
Blockchain
More Guides
Mondaq Advice Centres
India
Trademarks
India
Arbitration, Litigation and Conciliation
India
Insolvency
Global
Trademarks in SAARC Countries
More MACs
Curated Content
Fast Tracking Through The Patent Prosecution Highway In India
Obhan & Associates
Divisional Applications And Plurality Of Invention In India
Obhan & Associates
Do Scientific Publications Exempt Patent Applications From Anticipation?: The Indian Position
Obhan & Associates
Preparing For Invention Disclosure Meetings: A Guide For Inventors
Obhan & Associates
Patenting 3d Bioprinting In India
Obhan & Associates
Upcoming Events
Mondaq Social Media