India: Film Titles And Their Protection

by Lucy Rana and Pooja Thakur
S.S. Rana & Co. Advocates
Your LinkedIn Connections
with the authors

Any cinematographic work is recognized for decades by its "Title". Registration of title by producers and writers is therefore becoming a prerequisite in the industry. Registration of titles with industry associations doesn't hold water in courts. By contrast, ownership and validity of titles can be established when registered with the Trademark Registry. Registration imparts exclusive right to the person who registers to use the title and restrain unauthorized use or adoption or infringement of the same.

The Indian film and entertainment industry is one of the largest producers of world class films. It offers a big market in terms of consumers and has a significant growth potential with an expected growth rate of 20% per year. The grant of "Industry" status to the Indian film industry by the Government of India in 2001 resulted in its rapid evolution with the foray of many foreign players and investors including 20th Century Fox, Viacom Motion Pictures, Warner Brothers etc. This paradigm shift is astounding however IP (Intellectual Property) issues mainly related to controversies over using deceptively similar titles or other ways of unauthorized adoption of titles of films, infringement of copyright and trademarks, passing off have also cropped up simultaneously.

Indian Motion Picture Producers' Association (IMPPA), Association of Motion Pictures and Television Program Producers (AMPTPP) and Film and Television Producers' Guild of India, Film Writers' Association and Western India Film Producers Association (WIFPA) are the Industry associations that are consistently working with the objective of promoting and encouraging the production of feature films and protecting the commercial interest of films produced in India. Producers and writers (who are members of these associations) can also get the titles and scripts registered with these organizations. The film industry usually operates through these associations. Before registering the title, the association usually verifies with other associations as to whether the same or deceptively similar title has been registered with another association. However such registration only establishes priority in the adoption of title of film and authorship of the script and has no effect on any legal proceedings in the court. 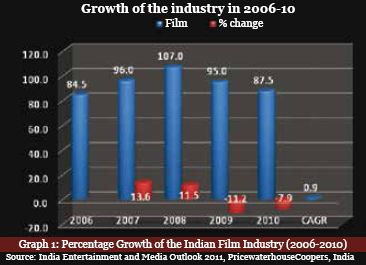 US Courts have taken an uniform view that the title alone of a literary work cannot be protected by Copyright Law. Thus copying of a title alone, and not the plot, characterization, dialogue, song etc. is not the subject of Copyright Law. The same fundamental is followed under Copyright Law in India. Indian Copyright Law offers protection to the original literary work, dramatic, musical and artistic works, cinematographic films and sound recording but not to titles alone.

Trademark Registration of the Title

The legal protection for literary titles lies in the field of trademark and unfair competition law and is protected under the fundamental tenets of the said law. The Delhi High Court has also noted in the famous "Nishabd" case that the title cannot be used in such a way as to create a likelihood of confusion of source, affiliation, sponsorship or connection in the minds of potential buyers. For these purposes, titles of literary and entertainment creations and works are treated in much the same way as the trademarks of other commercial commodities.

Titles may relate to a single literary work or to a series of literary works. The scope, parameters and limitations of both types of works as observed by the Delhi High Court is delineated below:

Titles of a series of literary works

Titles of a series of books, periodicals or newspapers function as a trademark to indicate that each edition comes from the same source as the others and can therefore be registered as a trademark. Such 'series titles' enjoy the same protection as usual trademark.

In order to be entitled for trademark protection, it is necessary to establish that the titles of single literary works have acquired secondary meaning. The underlying assumption behind this is that the question of likelihood of confusion of source, affiliation, sponsorship or connection in the minds of potential buyers/users would arise and can be contended only if the disputed title has acquired the secondary meaning and is capable of associating itself with the particular work or source.

Even if the work has not been released, a sufficient amount of pre-release publicity of the title may cause a title to acquire recognition sufficient for protection. Relevant evidence from which secondary meaning for a literary title may be inferred as a question of fact includes:

Trademark Applications by leading Media and Production Houses in India:

Leading production houses in India apply for registration of movie titles and labels in Class 41 that encompass a number of services including "entertainment". Phir Hera Pheri (1084237), Munna Bhai (1780467, 1780364) and Dhoom (2193798, 2095311 and 1319835) are examples of movie series where the producers have applied for registration of movie titles and labels in Class 41. On the other hand, as movies are also viewed on storage devices like DVDs, many applications are also filed in Class 9 that provides for, among other goods, "apparatus for recording, transmission or reproduction of sound or images...". The graph below depicts the number of applications filed for registration in Class 41 and Class 9 by some of the media houses in India. 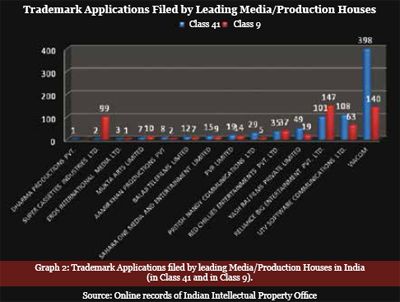 Any cinematographic work is recognized for decades by its "Title". It also helps the people to conceptualize the idea associated with the film. Registration of title by the producers and writers is therefore becoming a prerequisite and imperative to preserve their commercial rights and interests in the movies. As the registration of title with Industry Associations does not play any vital role in court cases. The ownership and validity of the title can be easily established in case the marks are registered with Trademark Registry.

ARTICLE TAGS
India Intellectual Property Trademark Media, Telecoms, IT, Entertainment Broadcasting: Film, TV & Radio
POPULAR ARTICLES ON: Intellectual Property from India
Patent Law in India
Anand & Anand
The Patents Act 1970, along with the Patents Rules 1972, came into force on 20th April 1972, replacing the Indian Patents and Designs Act 1911. The Patents Act was largely based on the recommendations of the Ayyangar Committee Report headed by Justice N. Rajagopala Ayyangar. One of the recommendations was the allowance of only process patents with regard to inventions relating to drugs, medicines, food and chemicals.
Difference Between Passing Off And Infringement Of The Trade Mark
Khurana and Khurana
A Trade mark may be defined as a lawfully protected abstract, word, symbol, color, mark, slogan or a mixture of those related to an organization or a selected product that differentiates it from the others accessible within the market.
All You Need To Know About "Well-Known Trademarks"
Khurana and Khurana
With coming up of the new Trade Mark Rules 2017, a new procedure has been created that allows the Registrar to proclaim a particular trademark as "well known".
Process: Trademark Registration In India
Intepat IP Services Pvt Ltd
Many entrepreneurs do not comprehend the importance of a TM search.
Deceptive Similarity And Judicial View
Khurana and Khurana
Trademarks play a vital role in creating a brand name and goodwill of any business. Not only does it helps in creating a brand value but also, aids in revenue generation.
Assignment And Licensing Of Copyright
Singh & Associates
Copyright is a protection given to the creators of certain types of works as an acknowledgment to their intellectual input
FREE News Alerts
Sign Up for our free News Alerts - All the latest articles on your chosen topics condensed into a free bi-weekly email.
Register For News Alerts
Article Tags
India Intellectual Property Trademark Media, Telecoms, IT, Entertainment Broadcasting: Film, TV & Radio
Related Articles
CGPDTM's Notice In Furtherance Of Supreme Court's Order Recalling Extension Of Limitation Period S.S. Rana & Co. Advocates
Artificial Intelligence The New Inventors Khurana and Khurana
Delhi High Court Proposes To Frame Intellectual Property Division (IPD) Rules, 2021 LexOrbis
Do Reference Signs Clarify Or Limit The Scope Of Patent Claims In India? Obhan & Associates
An Overview On The Invention Secrecy Act Of 1951 Khurana and Khurana
Mondaq Webinars
Complex/Cross-Border Construction Claims: Arbitrators, Mediators (former GCs) Explore Dispute Resolution to Keep Projects Moving
JAMS
Webinar Chicago United States
Investigations as a Key to Good Governance in the Middle East
Alvarez & Marsal Europe LLP
Webinar London UK
More Webinars
Comparative Guides
Alternative Investment Funds
Artificial Intelligence
Aviation Finance
Blockchain
Cartels
More Guides
Mondaq Advice Centres
India
Trademarks
India
Arbitration, Litigation and Conciliation
India
Insolvency
Global
Trademarks in SAARC Countries
More MACs