Single Bench of Delhi High Court recently while adjudicating an application for ad-interim inunction in a commercial suit being CS (COMM) No. 646/ 2022 filed by Carlsberg Breweries A/S against Tensberg Breweries Industries Pvt. Ltd. & Ors, for infringement of its registered trade mark "CARLSBERG" and trade dress dealt with the question of deceptive and phonetic similarity between the marks as well as the similar get-up of beer bottles and cans.

FACTS OF THE CASE:

Carlsberg Breweries AS (hereinafter referred to as the Plaintiff), is one of the most popular brand across the world for alcoholic and non-alcoholic beverages and is widely known for its effervescent beer under the brand name 'CARLSBERG'. The Plaintiff in order to protect its intellectual property rights applied and obtained various trademark registrations (word and device) for the mark 'CARLSBERG', the first registration of the Plaintiff dates back to 1949!

A list of registrations obtained for the famous 'CARLSBERG' is mentioned below: 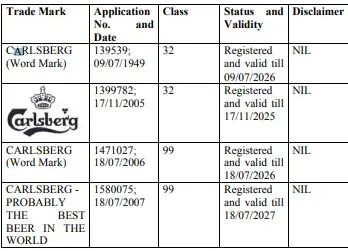 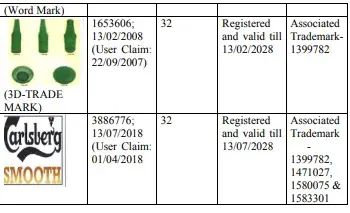 The Plaintiff learnt that Tensberg Breweries Industries Pvt. Ltd (hereinafter referred to as the Defendant) was incorporated on July 22, 2022 and is engaged in the business of manufacturing and selling alcoholic and non-alcoholic beverages.

One Tensberg India JV i.e. Defendant No.3 applied for registration of registration of the mark 'TENSBERG' (hereinafter referred to as the impugned mark/label). Details of the applications are as below:

One Tensberg Microbreweries Pvt. Ltd. i.e. Defendant No.4, is incorporated on April 1, 2022 is engaged in the business of manufacturing and selling beer bearing the impugned mark/ label 'TENSBERG.' In India

Defendant No.5 was in the business of manufacturing, brewing and exporting beer under the impugned mark/label from Nepal to India, while Defendant No.6 is the Indian subsidiary registered on January 6, 2021.

Since there was deceptive similarity between the Plaintiff's mark 'CARLSBERG' and Defendants mark 'TENSBERG', the present suit was filed seeking permanent injunction and restraining the Defendants from using the mark/label 'TENSBERG' among other reliefs.

SUBMISSIONS ON BEHALF OF THE PLAINTIFF:

The Counsel for the Plaintiff made the following submission for grant of ad-interim injuction in their favour:

SUBSMISSIONS ON BEHALF OF THE DEFENDANTS:

The Senior Counsel appearing on behalf of the Defendants made the following submissions before the Hon'ble Court:

OBSERVATIONS OF THE COURT:

After hearing the submissions of both the parties, the Hon'ble Court observed the following:

DECISION OF THE COURT:

After observing the above submissions, the Hon'ble Court directed that the Plaintiff has a good prima facie case in its favour and the balance of convenience is also in their favour. Further, the Defendants have not been able to clearly show its presence in other parts of country except Uttrakhand. Therefore, the Hon'ble Delhi High Court granted ad-interim injunction in favour of the Plaintiff and restrained the Defendants from sing the mark/ label 'TENSBERG' among other reliefs.

ARTICLE TAGS
India Intellectual Property Trademark Media, Telecoms, IT, Entertainment Advertising, Marketing & Branding
POPULAR ARTICLES ON: Intellectual Property from India
Can # Hashtags Be Protected As Intellectual Property In India?
Legacy Law Offices
In an ever-evolving era of digitization and mobile telephony, social media has become a quintessential platform for business development and marketing.
Internet And The Determination Of Jurisdiction In The Case Of Trade Mark Infringement
S.S. Rana & Co. Advocates
Internet has marked its presence in the commercial world in an unprecedented way. With businesses moving online to escalate their accessibility to a wider range of customers in the market, ...
Assignment And Licensing Of Copyright
S&A Law Offices
Copyright is a protection given to the creators of certain types of works as an acknowledgment to their intellectual input
A Study On: Novartis AG v. Union Of India
Khurana and Khurana
Intellectual property is an intangible form of property while a ‘Patent' is a subset of intellectual property.
How To Protect Your Brand With Trademark Monitoring!
Photon legal
Brand owners have an important responsibility to protect their hard-earned trademarks.
Patent Infringements And Their Types
S&A Law Offices
Patent is one of the most important forms of Intellectual Property (IP). The term of a patent is typically 20 years from the Priority date of the application.
FREE News Alerts
Sign Up for our free News Alerts - All the latest articles on your chosen topics condensed into a free bi-weekly email.
Register For News Alerts
Article Tags
India Intellectual Property Trademark Media, Telecoms, IT, Entertainment Advertising, Marketing & Branding
Related Articles
The IP Stack For Protecting Software In India: Copyright, Patents, Trade Secrets Obhan & Associates
From Distinctiveness To Genericide: Avoiding Trademark Ruin Obhan & Associates
Exports Under The Bolar Exception: A Key Arrow In The Indian Generics Quiver Obhan & Associates
It's A Wrap! Intellectual Property Round-Up 2022 G&W Legal
Swiss Military Trademark Case Khurana and Khurana
Mondaq Webinars
Considering the Nigerian Start-Up Act & The Opportunities for Tech
Oake Legal
A Guide for Business and Investors – The Sleeping Giant; Why is Nigeria the New Emerging Market for Global Business
Threshing Fields Law Practice
More Webinars
Comparative Guides
Alternative Investment Funds
Artificial Intelligence
Aviation Finance
Aviation Regulation
Blockchain
More Guides
Mondaq Advice Centres
India
Trademarks
India
Arbitration, Litigation and Conciliation
India
Insolvency
Global
Trademarks in SAARC Countries
More MACs
Curated Content
Fast Tracking Through The Patent Prosecution Highway In India
Obhan & Associates
Divisional Applications And Plurality Of Invention In India
Obhan & Associates
Do Scientific Publications Exempt Patent Applications From Anticipation?: The Indian Position
Obhan & Associates
Preparing For Invention Disclosure Meetings: A Guide For Inventors
Obhan & Associates
Patenting 3d Bioprinting In India
Obhan & Associates
Upcoming Events
Mondaq Social Media