In a case that goes back as 2005, between Mondelez India Foods Pvt Ltd, better known as Cadbury, and Neeraj Food Products, the Delhi High Court has finally made its judgement, ruling in favor of the plaintiff.

Cadbury India Ltd. is the trademark owner of registration 'GEMS' for button chocolate covered with colorful candy shells. Additionally, Cadbury also has obtained the copyright registrations for 'GEMS BOND' which has been used over the years for promoting 'GEMS'.

In 2005, Cadbury filed a lawsuit in the Delhi High Court against a competitor, Neeraj Food Products, claiming the infringement of the trademark registration "Gems" in detriment of his IP rights and asking for a permanent injunction and damages.

Cadbury argued that Neeraj Food Products had violated its trademark and copyright rights with the use of the mark 'James Bond' and 'Jamey Bond' with the image of chocolate buttons of similar colors as Cadbury's on its packaging.

Cadbury also claimed that they had used advertising for several years under the 'Gems Bond' name. 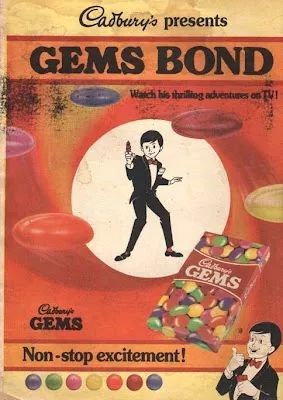 After the comparison between both the products, the Court recognized and affirmed the popularity and wide-known reputation of Gems when it comes to chocolate products in India. Furthermore, the Court observed not only the trademark "GEMS" but also the whole packaging with those certain colors' layout, should have been recognized as well-known among consumers which reconnect the mentioned box to the trademark of Cadbury. The court said, "Almost everyone's childhood is associated with the consumption of the plaintiff's 'Cadbury GEMS'/'GEMS'."

In the light of all these conclusions, the Court stated the existence of the trademark infringement made by Neeraj Food Products on detriment of Cadbury's trademark and confirmed a permanent injunction in favor of Cadbury.

Indeed, Section 11(1) of the Indian Trademarks Act, 1999 ("the Act") on relative grounds of refusal, states that if the word/mark applied for the trademark is anyhow identical or similar to any existing trademark for the same/similar good or services and for the different goods or services, then it will not be accepted as a trademark by the registry.

In the light of what above, the Court condemned Neeraj Food Products to pay an actual cost of ₹15.86 lakh worth damages to Cadbury (approximately $18,800).

The decision is worth of note, not only because it has been long awaited by the plaintiff but especially because in his decision, the Court made it clear that the class of customers and the sort of items/products in question should be taken into consideration when applying the test of likelihood of confusion.

In the present case, since the price range of the product in question was just 1 to 5 rupees, there was an "immense likelihood of confusion" among the customers because the mark in question refers to "chocolates," for which the consumers are of all ages.

For this purpose, the Court made a solid conclusion in favor of Cadbury as the color scheme, packaging, and trademarks that were involved in the case were identical or – anyway – falsely similar.

ARTICLE TAGS
India Intellectual Property Copyright Trademark
POPULAR ARTICLES ON: Intellectual Property from India
A Study On: Novartis AG v. Union Of India
Khurana and Khurana
Intellectual property is an intangible form of property while a ‘Patent' is a subset of intellectual property.
Assignment And Licensing Of Copyright
S&A Law Offices
Copyright is a protection given to the creators of certain types of works as an acknowledgment to their intellectual input
Difference Between Passing Off And Infringement Of The Trade Mark
Khurana and Khurana
A Trade mark may be defined as a lawfully protected abstract, word, symbol, color, mark, slogan or a mixture of those related to an organization or a selected product that differentiates it from the others accessible within the market.
Patent Law in India
Anand & Anand
The Patents Act 1970, along with the Patents Rules 1972, came into force on 20th April 1972, replacing the Indian Patents and Designs Act 1911. The Patents Act was largely based on the recommendations of the Ayyangar Committee Report headed by Justice N. Rajagopala Ayyangar. One of the recommendations was the allowance of only process patents with regard to inventions relating to drugs, medicines, food and chemicals.
Patent Infringements And Their Types
S&A Law Offices
Patent is one of the most important forms of Intellectual Property (IP). The term of a patent is typically 20 years from the Priority date of the application.
Compulsory Licensing In India
Khurana and Khurana
WIPO defines patent as an exclusive right granted for an invention, which is a product or a process that provides, in general, a new way of doing something, or offers a new technical solution to a problem
FREE News Alerts
Sign Up for our free News Alerts - All the latest articles on your chosen topics condensed into a free bi-weekly email.
Register For News Alerts
Article Tags
India Intellectual Property Copyright Trademark
Related Articles
Enforcing A Patent Right In India L. S. Davar & Co.
CGPDTM'S Notice For Streamlining The Trade Marks Show- Cause Hearings Through Dynamic Cause List S.S. Rana & Co. Advocates
Cause Of Action And Determination Of Jurisdiction In Intellectual Property Rights Cases In India Vaish Associates Advocates
What Cannot Be Protected Under The Trade Marks Act S.S. Rana & Co. Advocates
The New Age Infringers: Delhi High Court Tackles Online Counterfeits S.S. Rana & Co. Advocates
Mondaq Webinars
The New Swiss Data Protection Act - What You Need To Know
FABIAN PRIVACY LEGAL GmbH
Global Offshore Fintech Focus on Crypto: Laws, Regulations and Trends [REPLAY]
Carey Olsen
More Webinars
Comparative Guides
Alternative Investment Funds
Artificial Intelligence
Aviation Finance
Aviation Regulation
Blockchain
More Guides
Mondaq Advice Centres
India
Trademarks
India
Arbitration, Litigation and Conciliation
India
Insolvency
Global
Trademarks in SAARC Countries
More MACs
Curated Content
Fast Tracking Through The Patent Prosecution Highway In India
Obhan & Associates
Divisional Applications And Plurality Of Invention In India
Obhan & Associates
Do Scientific Publications Exempt Patent Applications From Anticipation?: The Indian Position
Obhan & Associates
Preparing For Invention Disclosure Meetings: A Guide For Inventors
Obhan & Associates
Patenting 3d Bioprinting In India
Obhan & Associates
Upcoming Events
Managing Intellectual Property Disputes
WilmerHale
Panel Bengaluru India
Mondaq Social Media