AM General LLC, the company in contract with the U.S Department of Defence to build the Humvee military vehicle (High Mobility Multipurpose Wheeled Vehicle), sued Activision Blizzard, Inc., a video game company, in 2017, alleging that Activision copied the vehicle's design for several issues of the popular Call of Duty video game franchise, as well as for repeatedly invoking the "Humvee" trademark and using the vehicle and trademarks in various promotional materials. The defendant maintained that the First Amendment's robust protection compelled dismissal of the AM General's allegations.

If the defendant's product is artistic or expressive, a two-prong test articulated in Rogers v. Grimaldi, 875 F.2d 994 (2d Cir. 1989) is applied which under most circumstances allows artistic or expressive works to use trademarks without risking liability under the Lanham Act. This is done mainly to protect speech under the First Amendment. The two prongs to the test are: determination of artistic relevance of the work (herein use of Humvees in Call of Duty) and if it has then the second prong is to prove whether the use "explicitly misleads as to the source or the content of the work." 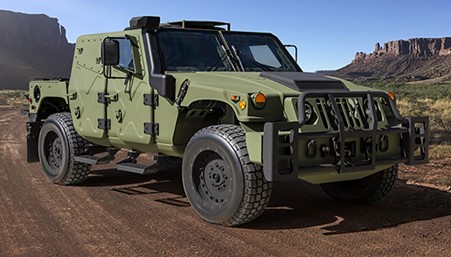 The court concluded that use of Humvees in the game is an artistic expression and value. For the second prong the court applied the Polaroid test and after analysing each factor concluded that it weights in defendant's favour. The court decided that Activision Blizzard's usage of Humvees was not clearly deceptive by applying the Polaroid Factors. Although some user polls indicated considerable confusion, the fact that AM General was a vehicle manufacturer and Activision Blizzard was a video game publisher largely counted against such assumptions.

"[If] the marks are used for different purposes and are presented to the public differently, even though they say the same thing, they are dissimilar and no issue of fact is created." DeClemente,  860 F. Supp at 47.

AMG's claim of trade dress infringement and unfair competition were also negated by the court. In short, the Court decided that "increasing the games' realism" was enough to make the usage of Humvees a part of the game's artistic expression, and granted Activision Blizzard summary judgement on all of AM General's claims.

The district court in this case found that Humvees have artistic relevance. The vehicle used by the military operations around the world having modern warfare will give the sense of the actual particularized reality to the players of realism and lifelikeness. And the court also found in this case that there is no any evidence which can show that the consumer confusion or explicitly misleading. And for a degree of similarity, the district court pointed out that, the purpose of the using mark by the plaintiffs is to sell the vehicles to militaries and on the other hand, the purpose of the defendants is to create realistic modern warfare video games. So, there is distinction of purpose and lack the similarity hence this factor is in favor of defendants.

For the proximity of the products, the court pointed out that, proximity may be measured by both things i.e., geographic proximity and market proximity. In this case, since the vehicle of plaintiff has no similar purpose as to the video game of the defendants, there is no issue of market proximity. So, it is also in favour of defendants.

For the issue relating to the Bridging the gap, which is the presumption that in future the senior user (plaintiffs), will enter into the market of junior user (defendants). The court found that AMG has not submitted any evidence that in future they are going to enter into the similar market of gaming as to which defendants are dealing with. So, there is also no issue of bridging the gap.

ARTICLE TAGS
India Intellectual Property Trademark Media, Telecoms, IT, Entertainment Gaming
POPULAR ARTICLES ON: Intellectual Property from India
Assignment And Licensing Of Copyright
S&A Law Offices
Copyright is a protection given to the creators of certain types of works as an acknowledgment to their intellectual input
Protection Of Movie Title As A Trade Mark – The 'Sholay' Protection
Shardul Amarchand Mangaldas & Co
In a recent judgement disposing of a long pending lawsuit, the Hon'ble Delhi High Court in Sholay Media Entertainment & Ors. v. Yogesh Patel & Ors has held that titles of films are eligible for protection as a trade mark...
Difference Between Passing Off And Infringement Of The Trade Mark
Khurana and Khurana
A Trade mark may be defined as a lawfully protected abstract, word, symbol, color, mark, slogan or a mixture of those related to an organization or a selected product that differentiates it from the others accessible within the market.
IP Violations On Social Media Platforms And The Role Of Intermediaries
Sujata Chaudhri IP Attorneys
The power of social media as a virtual platform for disseminating content created by an individual or entity is limitless. Social media is, by and large, ...
Headline: Navigating The Metaverse: Where Content Continues To Be King
Khaitan & Co
You may have seen videos of virtual avatars experiencing a concert, attending a festival or experiencing a famous real-life landmark in a digitally created space or...
Patent Law in India
Anand & Anand
The Patents Act 1970, along with the Patents Rules 1972, came into force on 20th April 1972, replacing the Indian Patents and Designs Act 1911. The Patents Act was largely based on the recommendations of the Ayyangar Committee Report headed by Justice N. Rajagopala Ayyangar. One of the recommendations was the allowance of only process patents with regard to inventions relating to drugs, medicines, food and chemicals.
FREE News Alerts
Sign Up for our free News Alerts - All the latest articles on your chosen topics condensed into a free bi-weekly email.
Register For News Alerts
Article Tags
India Intellectual Property Trademark Media, Telecoms, IT, Entertainment Gaming
Similar Articles
Powered by mondaq AI
MATCH
45%
Gaming Laws In India: A Toothless Regime PSA
45%
Fair Dealing In Video Game Reviews TMT Law Practice
43%
Intellectual Property Protection For Games InvnTree Intellectual Property Services Pvt. Ltd.
42%
Not Just A Videogame S.S. Rana & Co. Advocates
42%
Copyright In The Gaming Industry S.S. Rana & Co. Advocates
Related Articles
Can Hashtags Be Trademarked? Photon legal
Time To Retire The Lithium-ion Battery? Photon legal
8 Strangest Patents Ever (Part-I) Photon legal
Machines Cannot Think, Or Can They? Photon legal
Protection And Enforcement Of A Well-Known Trademark ANM Global
Mondaq Webinars
Global Life Sciences M&A: Market Overview and Trends
Dechert
Webinar London UK
Funding or insurance? Commercial Approaches for Litigation and Arbitration
Erso Capital Advisors LLC
Webinar California United States
More Webinars
Comparative Guides
Alternative Investment Funds
Artificial Intelligence
Aviation Finance
Aviation Regulation
Blockchain
More Guides
Mondaq Advice Centres
India
Trademarks
India
Arbitration, Litigation and Conciliation
India
Insolvency
Global
Trademarks in SAARC Countries
More MACs
Curated Content
Patenting 3d Bioprinting In India
Obhan & Associates
Under The Skin: Patentability Of Cosmetic Compositions And Treatments In India
Obhan & Associates
The Cords That Bind: Patenting Embryonic Stem Cell Related Inventions In India
Obhan & Associates
Reporting On Corresponding Foreign Patent Filings In India
Obhan & Associates