India: The Clash Of The Bulls And The Horses: The Case Of Red Bull V. Bakewell Biscuits

by Samridh Ahuja
Singh & Associates
Your LinkedIn Connections
with the authors
To print this article, all you need is to be registered or login on Mondaq.com.

TRADEMARK PORTFOLIO OF THE  PLAINTIFF

Red Bull holds a strong presence and an immense  reputation/goodwill around the world including  India, where they hold various trademark registration  for its RED BULL marks. The details of various Red  Bull marks which have attained registration status in  India are listed in the table below: 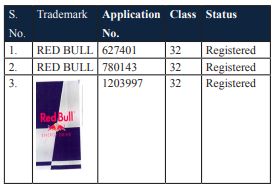 In the past, Red Bull has aggressively protected its  brand name and its unique marks and has successfully  fought through. The present case was no different.  The Plaintiff was aggrieved by the use and adoption  of the marks "Red Horse" and "Blue/Silver  Trapezoid Red Horse Label", by Bakewell Biscuits  Private Limited (the Defendant), which according to  the Plaintiff, is identical and/or deceptively similar  to Plaintiff's prior adopted, prior used, well-known  and registered Red Bull marks. The Plaintiff has  therefore filed this suit of infringement and passing  off against the Defendant. 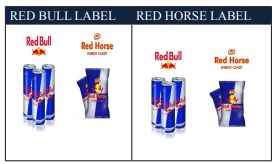 On May 18, 2021, the court observed that the Plaintiff  was successful in establishing a prima facie case in  its favour and accordingly granted an ex-parte ad-interim injunction against the Defendant, restraining  the Defendant from using the "Red Horse Label"  and/or any other same or deceptively similar mark to  that of the Plaintiff's Red Bull marks.

ARTICLE TAGS
India Intellectual Property Trademark
POPULAR ARTICLES ON: Intellectual Property from India
Patent Law in India
Anand & Anand
The Patents Act 1970, along with the Patents Rules 1972, came into force on 20th April 1972, replacing the Indian Patents and Designs Act 1911. The Patents Act was largely based on the recommendations of the Ayyangar Committee Report headed by Justice N. Rajagopala Ayyangar. One of the recommendations was the allowance of only process patents with regard to inventions relating to drugs, medicines, food and chemicals.
Assignment And Licensing Of Copyright
Singh & Associates
Copyright is a protection given to the creators of certain types of works as an acknowledgment to their intellectual input
All You Need To Know About "Well-Known Trademarks"
Khurana and Khurana
With coming up of the new Trade Mark Rules 2017, a new procedure has been created that allows the Registrar to proclaim a particular trademark as "well known".
Patents Law In India - Everything You Must Know
Vaish Associates Advocates
The presentPatents Act, 1970 came into force in the year 1972, amending and consolidating the existing law relating to Patents in India
Difference Between Passing Off And Infringement Of The Trade Mark
Khurana and Khurana
A Trade mark may be defined as a lawfully protected abstract, word, symbol, color, mark, slogan or a mixture of those related to an organization or a selected product that differentiates it from the others accessible within the market.
Process: Trademark Registration In India
Intepat IP Services Pvt Ltd
Many entrepreneurs do not comprehend the importance of a TM search.
FREE News Alerts
Sign Up for our free News Alerts - All the latest articles on your chosen topics condensed into a free bi-weekly email.
Register For News Alerts
Article Tags
India Intellectual Property Trademark
Related Articles
Associate And Series Trade Marks – Explained Sujata Chaudhri IP Attorneys
Exploring Copyright Protection For Fictional Characters Khurana and Khurana
Zooming Out On Compulsory Licensing Of Covid-19 Vaccines Khurana and Khurana
Analyzing The Significance Of Performer's Rights Under Copyright Law Khurana and Khurana
Understanding The Different Types Of Patent Claims Khurana and Khurana
Mondaq Webinars
Hot Topics in Fund Finance
Cadwalader, Wickersham & Taft LLP
Webinar New York United States
Cryptoassets in Cyprus
Kinanis LLC
Webinar Nicosia Cyprus
More Webinars
Comparative Guides
Alternative Investment Funds
Artificial Intelligence
Blockchain
Cartels
Corporate Governance
More Guides
Mondaq Advice Centres
India
Trademarks
India
Arbitration, Litigation and Conciliation
India
Insolvency
Global
Trademarks in SAARC Countries
More MACs
Upcoming Events
Mondaq Social Media