India: Limitation On The Choice Of Means And Methods Of Warfare

by Tanuka De
S&A Law Offices
Your LinkedIn Connections
with the authors
To print this article, all you need is to be registered or login on Mondaq.com.

THE PRESENT WEAPON SYSTEM OF THE WORLD

Considering the hostiles across the border and the anticipation and on-going talks of a warlike situation gathering over the issues in Kashmir, it is pertinent that the laws of war and use of weapons be re-visited once more because "At his best, man is the noblest of all animals; separated from law and justice he is the worst."- Aristotle

HOW DO WE USE OUR WEAPONS?

International Humanitarian law, also known as 'Laws of War' serves to regulate and minimize the effects of an armed conflict. The law of weaponry dwells on the basic concept that the rights of belligerents to adopt means of injuring the enemy are not unlimited.1 This principle is traced by the authors of the ICRC Commentary on Additional Protocol 1 back to the writings of Grotius2. It is reflected in the Hague Regulations of 19073 and in Article 35 of Additional Protocol 1 to the Geneva Conventions. It is undoubtedly a principle of customary international law and thus binding on all states irrespective of the fact whether they have ratified certain treaties or not.

The two basic principles of the law of armed conflict concerning the use of weapons are that weapons should neither cause unnecessary suffering to combatants nor be used in a manner that will indiscriminately affect both combatants and noncombatants4. These rules are now codified in Articles 35, 36and 51(4) of the Additional Protocol 1.

THE PRESENT WEAPONS SYSTEM CONDITION OF THE WORLD:

In using any particular weapons system, a distinction should be made between legitimate military targets and civilians and objects. The modern rules on specific weapons are contained in different treaties some dating to 1868.

The real problem is that not all states are bound by the same treaties. Some have accepted a given treaty but with national reservations or interpretations. Let us now look at the various provisions as they stand today:

India ratified all 3 protocols of the Convention in March 1984: some provisions on weapons were adopted a time ago. Others are very new and some still in the process of definition and ratification. As recently as September 1995, the Vienna Conference added a further protocol to those of 1980. This dealt with Laser weapons. It prohibits the use of laser weapons whose sole purpose is to blind the opponent. Proposals to Anti-Personnel mines were also addressed and efforts in this direction will continue in the future.

The Indian military ranks third in position in terms of number of troops after the U.S. and China. The paramilitary unit of the Republic of India is the world's largest paramilitary force at over one million strong. Eager to portray itself as a potential superpower, India began an intense phase of upgrading its armed forces in the late 1990s. India focuses on developing indigenous military equipment rather than relying on other countries for supplies. Most of the Indian naval ships and submarines, military armored vehicles, missiles, and ammunition are indigenously designed and manufactured.

The law of war is dynamic. It has and will continue to and try and limit the excesses of war. Much of the law is ignored particularly with respect to mines; it is the innocent civilians who pay the price.

India has recently declared a nuclear 'no-first-use policy and is in the process of developing a nuclear doctrine based upon a certain principle known as "credible minimum deterrence". In August 1999, the Indian Government came up with a draft of this particular doctrine which asserts that nuclear weapons are should exclusively and only be used in case of deterrence and also said that India will pursue a policy of "retaliation only". This means that India will use its nuclear weapons only in dire consequences only where the safekeeping of the nation depends upon the usage of these weapons only. The document also states the following statement: "India will not be the first to initiate a nuclear strike first, but will respond with punitive retaliation should deterrence fail" and that the decisions to authorize the use of nuclear weapons would be made by the Prime Minister or his 'designated successors' only. According to certain reports, despite the extreme tension during the India Pakistan War of 2001-2002, India remained committed to its no-firstuse policy. India is not a signatory to either the Nuclear Non-Proliferation Treaty (NPT) or the Comprehensive Test Ban Treaty (CTBT), but did accede to the Partial Test Ban Treaty in October 1963.

An unmanned aerial vehicle (UAV), commonly known as a drone and referred to as a Remotely Piloted Aircraft (RPA) by the International Civil Aviation Organization (ICAO), is an aircraft without a human pilot aboard. Its flight is controlled either autonomously by onboard computers or by the remote control of a pilot on the ground or in another vehicle. The typical launch and recovery method of an unmanned aircraft is by the function of an automatic system or an external operator on the ground.

Under international humanitarian law drones are not expressly prohibited, nor are they considered to be inherently indiscriminate or perfidious. In this respect, they are no different from weapons launched from manned aircraft such as helicopters or other combat aircraft. It is important to emphasize, however, that while drones are not unlawful in themselves; their use is subject to international law.5

There are people with contradicting mind sets around the world; members of the armed forces have often suggested that the weapons that have been discussed as inherently dangerous should be used without any restrictions for the sake of security with which they can defend themselves.

The words of these men fighting battles, ensuring our safety cannot be completely done away with and this is why there is still so much ambiguity remaining in the case of law of weapons. Jurists and other men yet do not know whether to completely ban such weapons for the sake of civilians and for the benefit of our future generations or to think about the state of the combatants-their mortality and allow the usage of such weapons. Such contradictions have come up in various international law cases also.

We can take the instance of The Nuclear Weapons Case6, where in the dissenting opinion given by Justice Higgins, she says that there has to be respect for human rights in International armed conflict and the "unnecessary suffering principle" should also be kept in mind. The weapons, which over the years have been banned by one treaty or the other, should be heeded to and the provisions must be obliged with. Contrary to the above decision, the Japanese Court in the Shimoda v. The State7 case says, "The use of a certain weapon, great as its inhuman result may be, need not be prohibited by international law if it has a great military effort.

Therefore we see how dual opinions about the usage of weapons have arisen in the world. However, the table stipulated on the subsequent page will give us a clear concept and understanding about the finality of the position of the law of weaponry as it exists today. 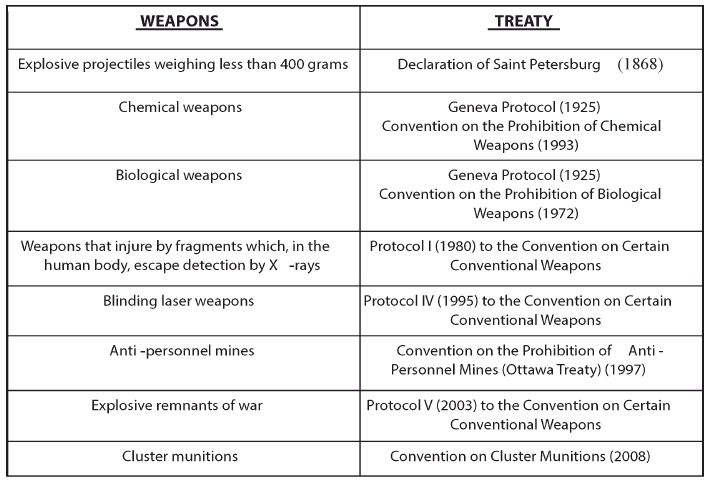 1 Bill Boothby, "The Law of Weaponry – Is it adequate?" in International Law and Armed Conflict: Exploring the fault lines-Essays in Honor of Yoram Dinstein

ARTICLE TAGS
India Government, Public Sector Terrorism, Homeland Security & Defence
POPULAR ARTICLES ON: Government, Public Sector from India
Human Rights Due Diligences And Impact Assessment For Tech Companies
Ikigai Law
As technology leaves its indelible marks on human lives, it impacts human rights as well. Therefore, it is not surprising that tech companies are realising the meaning of the popular phrase...
Surrogacy Regulations In India
MZM Legal
Essentially, there are two types of surrogacy practices: Traditional and Gestational.
Doctrine Of Legitimate Expectation
S&A Law Offices
Legitimate Expectation means that a person may have a reasonable expectation of being treated in a certain way by administrative authorities owing to some consistent practice in the past or an express promise made by the concerned authority.
Scope Of Judicial Review In Awarding Of Tenders
Gravitas Legal
One of the most common methods for the procurement of goods and services by the public authorities in India is through the tendering process.
Powers Of Attachment Of The Directorate Of Enforcement Under The Prevention Of Money Laundering Act, 2002
Link Legal
The commission of offences dealing with the crime of money laundering, in India, has increased considerably in the last decade or so with huge scandals being uncovered on a regular basis.
The Place Of ‘Judicial Review' In Indian Constitution & Its History
S&A Law Offices
Post-independence, the insertion of definitive provisions for ‘judicial review' in the Indian Constitution was necessary to facilitate assured individual and group rights.
FREE News Alerts
Sign Up for our free News Alerts - All the latest articles on your chosen topics condensed into a free bi-weekly email.
Register For News Alerts
Article Tags
India Government, Public Sector Terrorism, Homeland Security & Defence
Related Articles
Webinar: Complying With India's New Safe Harbour Laws: How The US And EU Are Navigating The Changes BTG Legal
Human Rights Due Diligences And Impact Assessment For Tech Companies Ikigai Law
Revising The FDI Policy For E-Commerce Nishith Desai Associates
Make In India: Policy And Regulation In The Defence Sector BTG Legal
Anti Money-Laundering Laws In India : The Prevention Of Money-Laundering Act, 2002 (PMLA) Vaish Associates Advocates
Mondaq Webinars
UK Construction Law Update: What happened in 2021? What can we expect in 2022?
Charles Russell Speechlys LLP
Webinar London UK
New Legislation Paves the Way for the Future of Aviation
HarleyJames Law
Webinar Nassau Bahamas
More Webinars
Comparative Guides
Alternative Investment Funds
Artificial Intelligence
Aviation Finance
Aviation Regulation
Blockchain
More Guides
Mondaq Advice Centres
India
Trademarks
India
Arbitration, Litigation and Conciliation
India
Insolvency
Global
Trademarks in SAARC Countries
More MACs