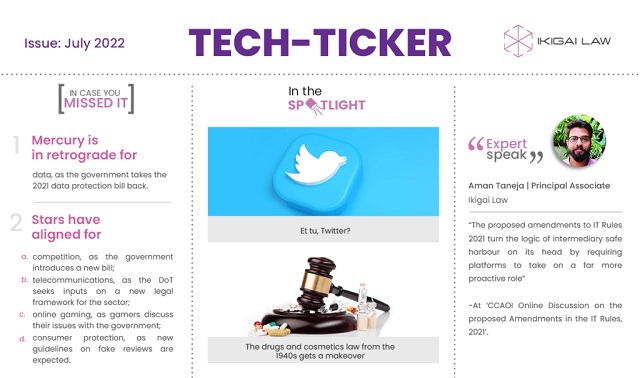 Here's a 5-minute lowdown of what's happened since the last time we spoke to you.

Twitter cited procedural deficiencies in issuing orders under the Information Technology Act, 2000 (IT Act) and violation of users' right to freedom of speech as main grounds for the suit. The IT Ministry had asked Twitter to take down content/user accounts relating to the farmers' protests and alleged mismanagement of Covid-19 by the Indian government. It gave Twitter an ultimatum to either comply with the orders or take on liability for user generated content on its platform.

Twitter's rebuttal: Twitter said that most of the accounts and content ordered to be blocked were for arbitrary reasons. And that the takedown orders had no nexus with the ground for blocking content under Section 69A of the IT Act. Which only allows blocking in the interest of national security. Twitter also relied on the IT Ministry's response to a Delhi High Court case stating that blocking of user accounts should be exercised as a last resort. Additionally, the Supreme Court of India in the Shreya Singhal v Union of India case upheld the government's power to issue blocking orders on the rationale that there are 'sufficient safeguards' in place, such as prior notice, to protect users from free speech restrictions and prevent government misuse.

The larger tweet: This dispute brings to light critical questions relating to the government's content blocking procedure. The decision in this case will impact the law relating to government takedown orders and intermediary safe harbour. The last few years have seen a steady increase in the government's efforts to tighten regulations on social media and we've witnessed a few public standoffs between the two sides. It was inevitable that some thorny issues would eventually make it to court. Anyone with an interest in platform regulation should be watching this case. We certainly are.

The drugs and cosmetics law from the 1940s gets a makeover

What's happening? For each healthcare product, the draft bill establishes boards to encourage research and policy advisory. The draft bill also specifies licensing authorities, sets quality standards, addresses issues like misbranding and adulteration. Some of these entities already exist, while others are new. For instance, the draft bill establishes a new Medical Devices Technical Advisory Board for regulating medical devices. The draft bill removes medical devices from the definition of drugs, acknowledging the need to regulate them separately. Several penalties have also been enhanced.

Know your online sales: Under the proposed new law, entities must get licenses to sell/ stock drugs, etc online. Online sale of medicines has been a hot button issue for several years now, with retail chemists' association rallying against online sales without licenses. Online pharmacies maintain that they are only intermediaries connecting licensed retailers with buyers. Cases are also pending across high courts. (See our timeline of India's e-pharmacy story). In 2018, the health ministry released a draft set of rules to govern e-pharmacies, which remain on hold. The draft bill acknowledges online sales but does not account for the different business models of online sales of drugs, AYUSH products, and medical devices.

In case you missed it

Mercury is in retrograde for

Stars have aligned for