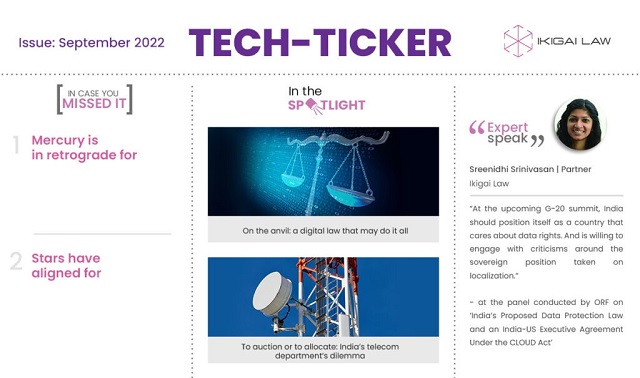 Milton Friedman said, "One of the great mistakes is to judge policies and programs by their intentions rather than their results".

On the anvil: a digital law that may do it all

Keeping up with the times:  The IT ministry is  working on replacing the 22-year-old Information Technology Act, 2000 (IT Act). Its vision is to develop a new comprehensive law to address emerging issues within the digital ecosystem. It also  seeks to make the internet – open, safe, trustworthy and accountable. This new law is being called the –Digital India Act (new law). Feeling inspired, the IT ministry is  examining the laws of nearly 20 countries to create this new law.  Reports suggest the law may also be painted in shades of the Digital Markets Act (DMA) and the Digital Services Act, recently introduced in the European Union.

The new law that may do it all, and more:The new law  may introduce provisions to regulate user safety and trustworthiness in the digital ecosystem. This includes increasing the scope of cybercrimes, regulating online content and  emerging technologies (such as AI, cryptocurrency and web 3.0), and specific provisions for  protecting women and children. The new law may also  regulate how intermediaries like social media platforms conduct their due diligence activities. In addition, it may address competition issues in digital markets by including provisions on  digital monopolies, dominance of large tech platforms,  ex ante regulations,  data sharing, and  net neutrality.

Of content moderation:The focus of the new law seems to be to  hold intermediaries accountable for content moderation. This is not only for extreme content, such as child pornography or sexually violent/explicit content. But also, for political content, such as fake news and misinformation. In line with that sentiment, the government may imagine a narrowed 'safe harbor protection' in the new law. Recently, responding to the Delhi High Court, the government  shared that it may bring new rules on suspending social media accounts permanently.

All eyes on the winter session of the Parliament: Inclusion of provisions on competition, market fairness, data sharing in the new law may lead to jurisdictional overlaps with other regulators. The new law is reportedly  expected to be released by coming winter session of the Parliament (November-December 2022). Mr. Rajeev Chandrasekhar, Minister of State IT (MoS)  said that in the next 3-4 months, the government will bring out a series of new laws for the digital economy. This includes the revised data protection bill, the Digital India Act, and the  National Data Governance Framework. These new instruments will be subject to extensive stakeholder consultations.

To auction or to allocate: India's telecom department's dilemma

New month, new consultation: Reports indicate that the Telecom Regulatory Authority of India (TRAI) will initiate a consultation process on the mode of spectrum allocation for satcom services in the Ku (12 to 18 GHz range) and Ka (26.5 to 40 GHz range) bands. The Department of Telecommunications (DoT) has informed the TRAI of the available frequencies for satcom services in these bands. The consultation will focus on whether the spectrum should be allocated or auctioned.

More context: Previously, TRAI  recommended that spectrum in the 27.5-28.5 GHz band should be auctioned. It had also suggested that both international mobile telecommunications and satcom services can co-exist in this band. However, based on the DoT's final  recommendations, the government had excluded the 27.5-28.5 GHz band from the recently concluded  5G auctions. . Under the current framework (based on the Supreme Court of India's directions), spectrum can only be auctioned. This also comes at a time when the government is looking to revise India's telecom laws.  Reports indicate that a new law to address issues relating to spectrum allotment is in the making. For which the DoT had already started  consultation earlier this year. This new law is being called the Wireless and Spectrum Act, which will replace the existing Indian Wireless Act 1933. The new law may be based on the US Communications Act 1934, which allows the government to take a call on the spectrum distribution framework based on the necessity and availability of spectrum. The new telecom law is  expected to be released for public consultation in the next few days.

In case you missed it!

Stars have aligned for

1.Cab aggregators:  The Competition Commission of India (CCI) has  released a market study on cab aggregators in India. The study examines themes such as – whether personalized pricing in the cab industry exists? If so, does it call for regulatory intervention? What are consumers' perceptions about surge pricing? Are there concerns related to transparency in pricing structure and fare calculation? Among other things, the CCI has advised cab aggregators like Ola and Uber to adopt self-regulatory measures. It suggests adoption of clear and robust polices for fare breakup, surge pricing, ride allocation, and data collection, use and sharing. This advisory is recommendatory in nature.

2.Social media intermediaries:   MoS for IT, Mr. Chandrasekhar  said that the government is open to a self-regulatory organization (SRO) for social media companies, that includes representatives from the industry and government. Mr. Chandrasekhar said that the SRO must be diverse and should have participation from start-ups (both Indian and foreign). He also added that it should not be dominated by large tech companies. The industry body – Internet and Mobile Association of India is leading the conversation on development of this SRO for online platforms. However, the idea of establishing an SRO has met with  opposition from Google, Snap Inc, ShareChat and civil society organisations.

3.Data:  On 30 August, the Centre for Development of Advanced Computing (a scientific body under the IT ministry)  sought comments on the draft guidelines for anonymization of data and  mobile security guidelines. The draft guidelines on data anonymization discuss technology options for anonymizing personal data. Especially in e-governance applications like Co-win. The draft guidelines on mobile security identify and discuss different security risks, threats, vulnerabilities in the mobile ecosystem. And recommend security control measures to counter them. On 06 September, both the guidelines were taken down from the government's e-governance standards portal. Reports suggest that the guidelines addressed complex issues, which called for broader consultation with other government departments, ministries and experts. The government is expected to release an updated version of the draft guidelines for public consultation soon. Also, read this  report on 'India's Proposed Data Protection Law and an India-US Executive Agreement Under the CLOUD Act' authored by Ikigai Law.

4.Open Network for Digital Commerce (ONDC): Mr. Piyush Goyal, Minister of Commerce and Industry, reviewed the ONDC's progress. ONDC has been testing its network with a closed user group since its alpha launch in 5 cities. It will then begin beta testing the network with public users in limited regions. Mr. Goyal said that ONDC's primary aim is to assist small, undigitized sellers to bring them into the e-commerce ecosystem. He highlighted that ONDC must build trust to ensure consumer grievance redressal and transparent return, refund and cancellation policies. On the buyer side (the layer that interacts with buyer), only Paytm is  active. On the seller side (the layer that interacts with the sellers), Digiit, eSamudaay, Gofrugal Technologies, Growth Falcons, and Seller App have gone live. A  study by JM Financials found that ONDC can benefit by working with e-commerce players like Amazon and Flipkart. It states that partnerships with established e-commerce companies can help ONDC scale and increase its credibility with buyers and sellers.

Mercury is in retrograde for

6. Online gaming:  The IT ministry's inter-ministerial panel is  likely to release draft rules on regulation of online games soon. This will be opened for public consultation. Sources  indicate that the draft rules may impose limits on monetary spending, gameplay duration, and encourage self-regulation by the industry. Also, the group of ministers deliberating on the levy of goods and services tax (GST) on online gaming, has  reached out to the 'law committee'. It has sought inputs on, if games of skill and chance should be treated differently for the purpose of levying GST. Lastly, the Supreme Court of India has  asked Junglee Games, Play Games 24×7, Head Digital Works and All India Gaming Federation, to respond to Tamil Nadu government's arguments for banning online gaming in the state.

7.Competition:  The Competition (Amendment) Bill, 2022 was referred to the parliamentary committee on finance, for examination. The committee will submit its report on the bill within 3 months – coinciding with the winter session of the Parliament. Separately, the committee is also examining ' anti-competitive practices of big-tech companies' and is expected to submit its report on ex ante regulations soon. However, the committee is set to be reconstituted, as its tenure expired on 13 September. This could lead to delays in the release of these reports.

"At the upcoming G-20 summit, India should position itself as a country that cares about data rights. And is willing to engage with criticisms around the sovereign position taken on localization." – Sreenidhi Srinivasan at the panel conducted by ORF on 'India's Proposed Data Protection Law and an India-US Executive Agreement Under the CLOUD Act' .