On February 25th, 2021, Union Law & IT Minister of India said "There should not be double standards. If an attack is there at Capitol Hill (US Congress), then social media supports police action. But if there is an aggressive attack at Red Fort, the symbol of India's freedom where the Prime Minister hoists the national flag, you have double standards. This is plainly unacceptable,". This statement was made while announcing the new Information Technology (Intermediary Guidelines and Digital Media Ethics Code) Rules, 2021 ("Rules") under the Information Technology Act, 2000 ("IT Act"). The Rules were notified in the official gazette on February 25th, 2021 and are now in force. We will be covering the Rules in a series of articles.

Due Diligence by Intermediaries

The Rules lay down that an intermediary, including a social media intermediary and significant social media intermediary, are required to observe certain due diligence while discharging its duties. The Rules stress that an intermediary that fails to observe any such due diligence cannot claim protection under the safe harbour provision (sub-section (1) of section 79 of the IT Act) and is liable for punishment under any law including the provisions of the IT Act and the Indian Penal Code.

The due diligence required to be observed by an intermediary amongst other things involves the following:

While the Rules have not yet prescribed the threshold value for who is considered a significant social media intermediary, the Rules do set forth provisions related to additional due diligence to be observed by a significant social media intermediary. These encompass within its scope actions such as appointing a chief compliance officer, nodal contact person, a resident grievance officer, publishing periodic compliance reports, providing unique tracking numbers to complaints to track a compliant etc.

We will in Part 3 of this series of articles on the Rules cover the provisions laid down in the Rules with respect to a Significant Social Media Intermediary.

Intermediary in Relation to News and Current Affairs Content

In addition to the above due diligence, an intermediary in relation to news and current affairs content is required to publish, on an appropriate place on its website, mobile based application or both, a clear and concise statement informing publishers of news and current affairs content that in addition to the common terms of service for all users, such publishers are required to furnish the details of their user accounts on the services of such intermediary to the MIB as provided under Rule 18. The intermediary also has the option to provide a publisher who has provided the MIB such information, a visible mark of verification visible to all users of the service (this could be interpreted to read as an equivalent to the blue tick verified accounts that Instagram has for official accounts).

Grievance Redressal Mechanism for an Intermediary 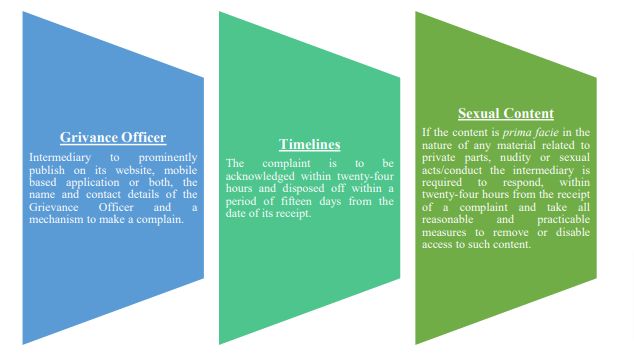 Supplementary to the above mechanism, the Rules also empower the MIB to direct intermediaries to block, modify, delete certain content and provide interim directions in case of emergencies 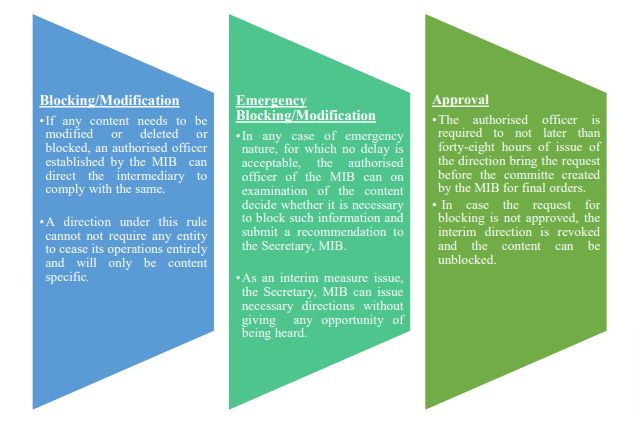 Part III of the Rules makes available a Code of Ethics that have been annexed to the Rules and a three-tier grievance redressal mechanism. While we have not elaborated on the Code of Ethics here, we have covered the same in Part 2 in the series of articles on the Rules. Part III of the Rules is applicable to publishers of news and current affairs content and publishers of online curated content (collectively referred to as "Publishers"). Publishers shall mean all such Publishers who operate in the territory of India or conduct systematic business activity of making its content available in India. A Publisher shall be deemed to operate in the territory of India where such publisher has a physical presence in the territory of India. "Systematic Activity" shall mean any structured or organised activity that involves an element of planning, method, continuity or persistence. Part III unlike the rest of the Rules is to be administered by the Ministry of Information and Broadcasting ("MIB").

To ensure observance and adherence to the Code of Ethics by Publishers operating in the territory of India, and for addressing the grievances made in relation to Publishers, a three-tier structure for grievance redressal has been provided for. 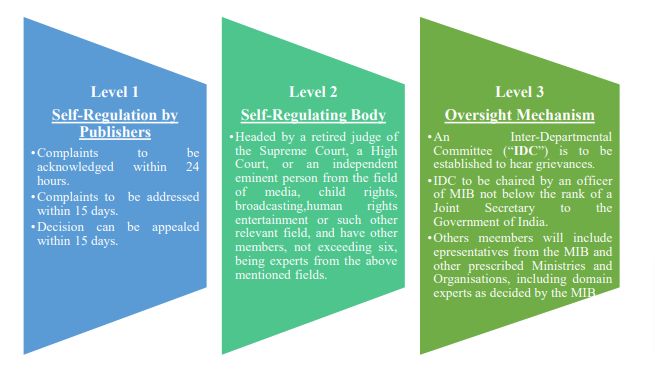 We will in Part 2 in the series of articles on the Rules cover in detail this Grievance Redressal Mechanism. It is however noteworthy to mention that a compliant can be registered directly with the Oversight Mechanism and need not traverse through all three levels. These Rules will no doubt have significant implications for social media platforms, OTT platforms, messaging applications and all other online content and news aggregators in India.