by Kartik Ganapathy , Ashi Bhat and Ankita Gupta
IndusLaw
Your LinkedIn Connections
with the authors

A. Introducing the confusion

May. Who would have thought that a one syllable word can cause so much of confusion! Yet, here we are interpreting the intention of the legislature in using the word 'may' in Section 23 of the Companies Act, 2013 ("2013 Act") and its implications.

Section 23 of the 2013 Act1, prescribes the manner in which a private company and a public company 'may' issue securities. In this article we have made an attempt to analyse the various provisions which pertain to raising capital by a private company. The point of contention is whether Section 23 (2) of the 2013 Act is intended to be an overarching provision and govern the issuance of any and all securities by a private company; or if the meaning of the word 'may', in Section 23 (2) of the 2013 Act, is to be construed in its literal sense and therefore only supposed to be a guiding principle for private companies. This article essentially dwells on Section 23 (public and private placement), Section 42 (private placement), Section 54 (issue of sweat equity shares), Section 62 (further issue of share capital), Section 71 (debentures) and Rule 12 of Companies (Share Capital and Debentures) Rules, 2014 (issue of employee stock options), in search of clarity.

Below is a flow-chart diagnosing the problem. 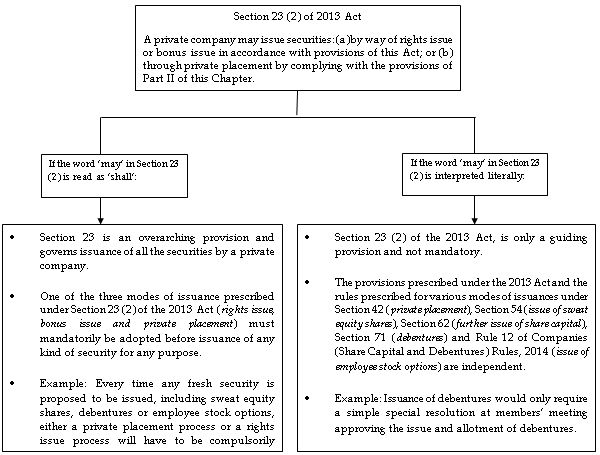 Section 23 (2) of the 2013 Act, if 'may' is interpreted in its permissive literal connotation, would mean that a private company issuing any security is free to adopt the procedures provided under Section 42 (private placement), Section 54 (issue of sweat equity shares), Section 62 (further issue of share capital), Section 71 (debentures) and Rule 12 of Companies (Share Capital and Debentures) Rules, 2014 independently.

However, if 'may' is not construed literally, but is instead read as 'shall', then an interpretation of Section 23 (2) of the 2013 Act will lead to the view that it is intended to be a mandatory provision. In other words, Section 23 (2) of the 2013 Act is the stem provision, and all other sections under the 2013 Act relating to the issuance of securities are its branches. In such a construct, the word 'may' would then be deemed to only signify that once a private company has decided to issue securities it can do so only by selecting any of the three modes provided under Section 23 (2) of the 2013 Act. This therefore leads to the conclusion that every time any security, whether shares, sweat equity, debentures or employee stock options, are proposed to be issued either a private placement or a rights issue process will have to be followed by the private company, unless such shares are being issued as bonus shares.

Given the existing ambiguous language and lack of clarity on the subject, it will be useful here to examine the judicial precedents to understand the principles adopted by the courts in interpreting whether 'may' amounts to 'shall'.

In the case of Sarla Goel and Ors. Vs. Kishan Chand2, the Supreme Court stated that "It is well settled that whether the word "may" shall be used as "shall", would depend upon the intention of the Legislature." Therefore, to understand the intention of the legislature, it will be useful to trace the history of Section 23 vis-a-vis the 2013 Act.

To provide the much needed clarity, a suggestion was made in the 57th report on the 2011 Bill issued by the Standing Committee on Finance (2011-2012) ("57th Report"), that Clause 23 (2) be amended to make it consistent with Clauses 62 and 63 of the 2011 Bill to allow issue of shares through rights issue and bonus issue also. The 57th Report suggested that the word 'only' be replaced with 'also' to remove confusion in the interpretation of Section 23 read with Section 62 and Section 63.

The Companies Bill, 2012 ("2012 Bill") amended Clause 23 (2). The legislature adopted the first suggestion and added the words rights issue and bonus issue as other permitted modes of issuances. However, the legislature not only deleted 'only' but also did not add the word 'also' to the language.

It was also suggested in the 57th Report that shares offered to employees pursuant to employee stock option plans pursuant to Clause 62(1) (b) ("ESOPs") be exempted from restrictions relating to private placement. The 57th Report also suggested that language to this extent should be incorporated in Clause 42 or in the rules to be notified. The 2012 Bill consequently amended Clause 42 (2) and an exception was carved out. Under the exception if a private placement offer for securities is made to more than 50 people, the employee stock options offered to the employees shall not be taken into account for counting the numbers.

What needs to be noted here is that the suggestion of the 57th Report specifically stated that shares offered to employees pursuant to employee stock option plans be exempted from restrictions relating to private placement. However, only an exemption was carved out in this regard to determine the number of people to whom shares may be offered and the question whether Section 42 will be applicable in case of an issuance made under employee stock options was not addressed. Considering the silence adopted by the legislators on this issue, while specifically dealing with a related issue, it might again be argued that the same was intentional and the legislators always envisioned Section 42 to be applicable to ESOPs issuance and consequently for Section 23 to govern the entire matter of issuances.

We note that Rule 13 of the Companies (Share Capital and Debenture) Rules, 2014 which deals with issue of shares on a preferential basis states that preferential offer means issue of shares and securities but excludes inter alia rights issue, ESOP, sweat equity shares and bonus shares. It also clarifies that issue of shares and securities means equity shares, fully convertible debentures, partly convertible debentures or any other securities which would be convertible into equity shares. It should be noted here that this Rule does not exclude debentures. Further, Rule 14 of the Companies (Prospectus of Securities) Rules, 2014 also states that in case of an issuance of non-convertible debentures, a special resolution may be passed only once in a year together for all the issuances made in that year. This would indicate that it has always been intended that debentures were to be issued by either of the modes mentioned under Section 23. It may also be argued that since preferential offer excludes sweat equity, bonus shares and ESOPS, these issuances do not have to follow the procedure under Section 62 (c)3 and consequently Section 42. However, this still does not explain whether these issuances should be made under Section 62 (1) (a) i.e. rights issue, or not.

The reason and the manner in which the revisions were brought about to Section 23 and other sections of the 2013 Act, seem to suggest that the use of the word 'may' is meant to be mandatory in nature and issuances can only be made vide the modes prescribed. This read together with the term 'security' could be taken to mean that the issuance of any and every security has to follow the methods prescribed. It can however also be argued that the legislators have intentionally used the word 'may' and intended to keep Section 23 (2) of the 2013 Act non-mandatory.

D. Conclusion: Does 'may' mean 'must'

The Supreme Court in Mohan Singh and Ors. v. International Airport Authority of India and Ors4 while relying upon Crawford on the Construction of Statutes observed as follows:

"The question as to whether a statute is mandatory or directory depends upon the intent of the Legislature and not upon the language in which the intent is clothed. The meaning and intention of the Legislature must govern, and these are to be ascertained, not only from the phraseology of the provision, but also by considering its nature, its design, and the consequences which would follow from construing it the one way or the other..."

If the word 'may' is construed as-is, then effectively Section 23 is not saying much. A private company may or may not issue its shares through the modes prescribed thereunder. In which case having Section 23 is equivalent to not having it at all. On the other hand if one believes that 'may' is presumed to mean 'shall' then all the other provisions will automatically be tied to either a private placement or rights issue process. However, we do not find any provision in the 2013 Act which specifically states that all issuances have to necessarily be made under Section 23 and the same has been left to interpretation. The recent amendments to the 2013 Act by way of the Companies (Amendment) Act, 2015 have refused to deal with this issue and have provided no guidance vis-a-vis the existing intersecting provisions. The proposed Companies Bill 2016 also appears to be silent on the topic.

Considering the overlapping requirements and lack of clarity, the Ministry of Corporate Affairs should provide some guidance or clarification to make clear the compliance necessary. This clarification should be aimed at removing inconsistencies with respect to the applicability of Sections 23, 42 and 62. Pending clarity on the subject, one may want to ensure that in the interest of all issuances being compliant, they are made only in the manner prescribed under Section 23.

3. Section 62 (1) Where at any time, a company having a share capital proposes to increase its subscribed capital by the issue of further shares, such shares shall be offered—

(a) to persons who, at the date of the offer, are holders of equity shares of the company in proportion, as nearly as circumstances admit, to the paid-up share capital on those shares by sending a letter of offer subject to the following conditions, namely:— (i) the offer shall be made by notice specifying the number of shares offered and limiting a time not being less than fifteen days and not exceeding thirty days from the date of the offer within which the offer, if not accepted, shall be deemed to have been declined; (ii) unless the articles of the company otherwise provide, the offer aforesaid shall be deemed to include a right exercisable by the person concerned to renounce the shares offered to him or any of them in favour of any other person; and the notice referred to in clause (i) shall contain a statement of this right;(iii) after the expiry of the time specified in the notice aforesaid, or on receipt of earlier intimation from the person to whom such notice is given that he declines to accept the shares offered, the Board of Directors may dispose of them in such manner which is not dis-advantageous to the shareholders and the company;

(b) to employees under a scheme of employees' stock option, subject to special resolution passed by company and subject to such conditions as may be prescribed; or

(c) to any persons, if it is authorised by a special resolution, whether or not those persons include the persons referred to in clause (a) or clause (b), either for cash or for a consideration other than cash, if the price of such shares is determined by the valuation report of a registered valuer subject to such conditions as may be prescribed.