India: The ‘Collaborative Search And Examination' Enterprising Or Overrated?

by Intepat Team
Intepat IP Services Pvt Ltd
To print this article, all you need is to be registered or login on Mondaq.com. 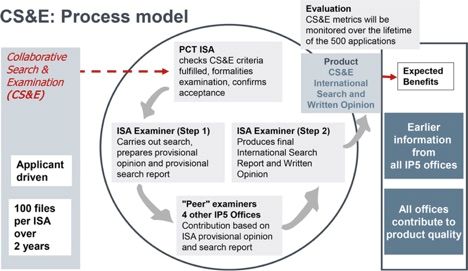 Traditionally, when an International Patent Application is made through Patent Cooperation Treaty (PCT), international searches and examinations are carried out by International Search Authority (ISA) or International Preliminary Examining Authority (IPEA). The National Office of a country is generally granted the status of ISA/IPEA which performs an international search for prior art and issues report regarding the patentability of the claims of the application. The written opinion serves as a good predictor for the patentability of the applicant's invention. The applicant, based on this report, can either request for examination and proceed with the national phase or hold off any further proceedings.

Over the years, the IP5 Offices (which consist of the European Patent Office (EPO), the Korean Intellectual Property Office (KIPO), the Japan Patent Office (JPO), the State Intellectual Property Office of the People's Republic of China (SIPO) and the United States Patent and Trademark Office (USPTO)) have endorsed a new framework wherein the examiners from each of the IP5 offices collaborate for the establishment of a consolidated international search report and the written opinion under PCT Chapter I, which, although remaining the opinion of the chosen International Searching Authority, is based on contributions from the participating offices. In doing so, the IP5 offices aim at establishing a higher quality of search report and written opinion. After successful two pilot projects, the IP5 offices announced the Collaborative Search and Examination (CS&E), a third pilot project which would be operational from 1st July 2018. The IP5 offices head into this pilot project with the view to assessing the users' interest for such a new PCT product and the expected efficiency gains for the participating offices.

In order to ascertain the user's interest in project, the applications which shall be examined in the CS&E project shall be selected by the applicants themselves. The applicant's can participate in the project by filing a standard participation form together with the international application with the receiving Office of one of the IP5 offices or the International Bureau of the World Intellectual Property Organization (WIPO).

The main ISA would then perform the search and examinations in a manner no different from an ordinary international application. Unlike the traditional ISA search, the search report and the written opinion will only be a provisional work product, which shall be redirected to other peer-ISA where additional searching would be conducted to the necessary extent. Each peer-ISA would then transmit their contributions to the main ISA, where final search report and the written opinion would be prepared in light of these contributions.

Currently, the applicants can participate in the pilot project with no additional costs, other than the standard fee for a PCT search at the competent ISA while providing the applicant with a higher quality of the search and greater legal certainty. This way, the project presents a good opportunity for applicants to ascertain the patentability of their inventions in different countries, that too in a much earlier stage of the application with no additional costs. The applicant, with the opinion of 5 different ISAs, will get a clearer picture as to the patentability of his/her invention and can decide upon whether to proceed with the national phase, and if so in which countries. The ISAs, on the other hand, will benefit from CS&E by improving the quality and efficiency of the international search and examination of the applications. The offices also benefit from the creation of a set of common quality and operational standard while processing the applications. This way, the efficacy of the search report and the written opinion will improve, which would in turn improve the protection of patents as a whole.

With two pilot projects with encouraging feedback, the IP5 offices heads with an optimistic outlook to the third pilot, which may potential change the existing framework and in-turn the IP dynamics.

ARTICLE TAGS
India Intellectual Property Patent
POPULAR ARTICLES ON: Intellectual Property from India
Patent Law in India
Anand & Anand
The Patents Act 1970, along with the Patents Rules 1972, came into force on 20th April 1972, replacing the Indian Patents and Designs Act 1911. The Patents Act was largely based on the recommendations of the Ayyangar Committee Report headed by Justice N. Rajagopala Ayyangar. One of the recommendations was the allowance of only process patents with regard to inventions relating to drugs, medicines, food and chemicals.
Compulsory Licensing In India
Khurana and Khurana
WIPO defines patent as an exclusive right granted for an invention, which is a product or a process that provides, in general, a new way of doing something, or offers a new technical solution to a problem
Patents Law In India - Everything You Must Know
Vaish Associates Advocates
The presentPatents Act, 1970 came into force in the year 1972, amending and consolidating the existing law relating to Patents in India
What Can Be Patented In India?
Intepat IP Services Pvt Ltd
Sections 3 and 4 of the Indian Patents Act, 1970 specifically state exclusions to what can be patented in India.
Concept Of Fair Use And Fair Dealing In Copyright
Singh & Associates
Fair use supports "socially laudable purposes," typically, if not exclusively, involving the use of the copyrighted work by a second author
All You Need To Know About "Well-Known Trademarks"
Khurana and Khurana
With coming up of the new Trade Mark Rules 2017, a new procedure has been created that allows the Registrar to proclaim a particular trademark as "well known".
FREE News Alerts
Sign Up for our free News Alerts - All the latest articles on your chosen topics condensed into a free bi-weekly email.
Register For News Alerts
Article Tags
India Intellectual Property Patent
Related Articles
Fair Use Of Trademark- FIR Quashed Against Fraudulent Use Of Sakal Times Trademark S.S. Rana & Co. Advocates
Infringement And Passing Off In Pharmaceutical Trademarks To Be Minimum S.S. Rana & Co. Advocates
To Litigate Or Arbitrate, A "Heroic" Dilemma Obhan & Associates
Section 3 (C) – IPAB's Order On University Of Copenhagen Vs Controller Of Patents Singh & Associates
Dissolution Of IPAB Singh & Associates
Mondaq Webinars
Future Series: The Journey to Net-Zero: Climate Change, Carbon Credits and Emissions Trading
Bennett Jones LLP
Webinar Calgary Canada
Notice and Claims Administration Best Practices: U.S foundations, Global Implications
Angeion Group
Webinar Philadelphia, PA United States
More Webinars
Comparative Guides
Alternative Investment Funds
Artificial Intelligence
Blockchain
Cartels
Corporate Tax
More Guides
Mondaq Advice Centres
India
Trademarks
India
Arbitration, Litigation and Conciliation
India
Insolvency
Global
Trademarks in SAARC Countries
Global
Investment Immigration
More MACs
Upcoming Events
Mondaq Social Media