by Tushar Kohli (New Delhi)
Singh & Associates
Your LinkedIn Connections
with the authors
To print this article, all you need is to be registered or login on Mondaq.com.

Advancements in technology play a vital role in people's life as they create advantages that make human life easier and simpler. The research and development in the field of vehicle manufacturing, structural design and innovation make for ease and comfort. However, traditional combustion vehicles have some inherent disadvantages also. The gases emitted by these vehicles adversely impact both human life and the natural environment. The toxic gases like carbon monoxide and carbon dioxide are emitted by the vehicles due to the combustion of conventional driving fuel like petroleum and diesel, which result in negative impacts on environment and life and also harm the protective ozone layer of the earth which also leads to global warming. The growing human population constantly raises the demand for energy and technologies, resulting in more production and increased use of vehicles, further deteriorating the environment and drastically depleting the conventional driving fuel reserves, leading to fuel price rises which in turn negatively impacts economies.

The rising costs of the conventional driving fuel and the resultant negative impacts on the environment has led the innovators to search for alternatives – and electric vehicles have emerged as the most viable alternative. Though electric vehicles were first introduced way back in 1829, but in the 1900s, electric vehicles were replaced by preference for petroleum-fueled internal combustion engines (ICEs) due to factors like abundance of traditional fuel, non-awareness about environmental impacts and preference of individuals. But now, rising pollution, greenhouse gas emissions, rising and unpredictable fuel prices have revived people's interest in electric vehicles. The electric vehicle provides a number of benefits over the conventional driving fuel like lower running cost, less maintenance cost, reduced emission of pollutant gases etc.

The increasing need and demand for electric vehicles has made the innovators think differently to bring further advanced and innovative features to the EVs. Some advantages of Electric Vehicle are - 1) No biofuels required, 2) No emission of poisonous gases often associated with global warming, and 3) The use of electric engine and close loop control unit reduces the maintenance task. In current times, research is focussed on improving the quality of lithium batteries which aim to reduce the cost of lithium battery and generate less noise as compared to the conventional electric vehicles. The increasing demand for reducing carbon emission and development of advanced and fast charging stations are the two factors expected to propel the growth of electric vehicle market.

The global electric vehicle market demand was estimated at 8.6 million units in 2018 and it is projected to reach 40.6 million units by 2026 with the EV industry exhibiting a CAGR of 21.1% during the forecast period.

In this growing competition in the field of development and filing of patent applications related to the electric vehicle along with advance features, Tesla is one of the important players. It plays an important role in the design, manufacture and production of the electric vehicles. It recently launched Model 3, which is one of the bestselling vehicles in the United States of America. Tesla also plays an important role in providing new direction in the field of energy generation and storage system. The company has filed 140 patent applications related to electric vehicle.1

According to a report, the market for electric vehicle is growing rapidly in the Asia-Pacific region. The highest demand, development, and manufacture of electric vehicles is in the Asia-Pacific region, followed by Europe and the United States of America. The United States of America and China are the top regions in the world conducting most research in the field of EVs. Based on research and development, these regions filed largest number of patent applications in between the years 2010–2020. The country wise patent application filing trends show that after the United States of America and China, the highest numbers are filed by Japan, Korea, Germany, Canada, and Australia. The applicants also use alternative path or route for filing their patent applications like European patent office and Patent cooperation treaty to seek protection in several countries by single and first filing. 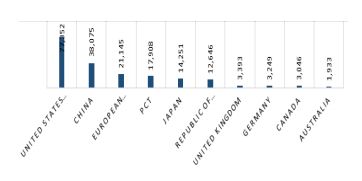 Environment friendliness, high efficiency in performance, and low pollutant emissions are the factors which increase the market demand for electric vehicles. The advanced features of the electric vehicle also comply with strict government legislation and regulations on the emission of toxic gases from vehicles, which is also one of the reasons for the growth of the segment. It can be inferred from the above market data and patent application filing data that the future of electric vehicles in the automotive sector is very bright. Innovative practices and the filing of patent applications are fueled by high competition among applicants or key players in order to protect innovation and their IP rights.

ARTICLE TAGS
India Energy and Natural Resources Oil, Gas & Electricity Intellectual Property Patent
POPULAR ARTICLES ON: Intellectual Property from India
Patent Law in India
Anand & Anand
The Patents Act 1970, along with the Patents Rules 1972, came into force on 20th April 1972, replacing the Indian Patents and Designs Act 1911. The Patents Act was largely based on the recommendations of the Ayyangar Committee Report headed by Justice N. Rajagopala Ayyangar. One of the recommendations was the allowance of only process patents with regard to inventions relating to drugs, medicines, food and chemicals.
Process: Trademark Registration In India
Intepat IP Services Pvt Ltd
Many entrepreneurs do not comprehend the importance of a TM search.
All You Need To Know About "Well-Known Trademarks"
Khurana and Khurana
With coming up of the new Trade Mark Rules 2017, a new procedure has been created that allows the Registrar to proclaim a particular trademark as "well known".
Patents Law In India - Everything You Must Know
Vaish Associates Advocates
The presentPatents Act, 1970 came into force in the year 1972, amending and consolidating the existing law relating to Patents in India
Compulsory Licensing In India
Khurana and Khurana
WIPO defines patent as an exclusive right granted for an invention, which is a product or a process that provides, in general, a new way of doing something, or offers a new technical solution to a problem
Difference Between Passing Off And Infringement Of The Trade Mark
Khurana and Khurana
A Trade mark may be defined as a lawfully protected abstract, word, symbol, color, mark, slogan or a mixture of those related to an organization or a selected product that differentiates it from the others accessible within the market.
FREE News Alerts
Sign Up for our free News Alerts - All the latest articles on your chosen topics condensed into a free bi-weekly email.
Register For News Alerts
Article Tags
India Energy and Natural Resources Oil, Gas & Electricity Intellectual Property Patent
Related Articles
But Is My Trade Dress Valid? Court Says NO If Functionality Is Established Khurana and Khurana
China's New Patent Law In Force Khurana and Khurana
Copyright Protection In Musical Work Khurana and Khurana
China Opens IP Centers In Northeast Khurana and Khurana
De Minimis In Copyright Law – Trivial Or Proceed To Trial Sujata Chaudhri IP Attorneys
Mondaq Webinars
Merger Control in Africa in 2021 – Where To Go From Here?
ENSafrica
Webinar Cape Town South Africa
Reshaping Strategies for Wealth Management in the Post-Pandemic Economy
Wedlake Bell
Webinar London UK
More Webinars
Comparative Guides
Alternative Investment Funds
Artificial Intelligence
Blockchain
Cartels
Corporate Governance
More Guides
Mondaq Advice Centres
India
Trademarks
India
Arbitration, Litigation and Conciliation
India
Insolvency
Global
Trademarks in SAARC Countries
More MACs
Upcoming Events
Mondaq Social Media