In case of international commercial transactions entered into between an Indian party or its wholly owned subsidiary abroad and the foreign party, sometimes the foreign party insists upon the personal guarantee of individual Indian promoters in order to secure the contractual obligations of the Indian party or its overseas wholly owned subsidiary ("WOS") for the reason that such transactions are generally entered into between the parties on the strength and capability of the ultimate individual Indian promoters. A question arises as to whether such personal guarantee by the individual promoters (direct / indirect promoters) is legally permitted under Indian foreign exchange laws?

The Reserve Bank of India ("RBI") in terms of the provisions of 'Master Circular on Guarantees and Co-acceptances' dated July 1, 2014, and 'Master Circular on Direct Investment by Residents in joint ventures or WOS' dated July 1, 2014, as issued by (collectively referred to as "FEMA Circulars"), has allowed 'individual promoters' of Indian party to provide their personal guarantee within the total financial commitment of 400% of net worth of the Indian party (financial commitment exceeding USD 1 (one) billion or its equivalent would require prior approval of the RBI)  in relation to the joint venture / WOS abroad, subject to the following conditions:

(iii)    Such personal guarantee is required to be reported to the RBI in form ODI – Part II.

The term 'promoter' is not defined under the Foreign Exchange Management Act, 1999 ("FEMA") / FEMA Circulars. However, reference of the same may be taken from the definition of 'promoter' as provided under other laws. As per the Companies Act (CA) 2013, 'promoter' inter-alia includes ".........a person who (a) who has been named as such in a prospectus or is identified by the company in the annual return referred to in Section 92; or(ii) has control over the affairs of the company, directly or indirectly whether as a shareholder, director or otherwise; or (iii) in accordance with whose advice, directions or instructions the Board of Directors of the company is accustomed to act......."

The term 'control' as used in the aforesaid definition of 'promoter', is defined under CA 2013 as follows:

"(27) "control" includes the right to appoint majority of the directors or to control the management or policy decisions exercisable by a person or persons acting individually or in concert, directly or indirectly, including by virtue of their shareholding or management rights or shareholders agreements or voting agreements or in any other manner."

In view of the aforesaid definitions of 'promoter', an individual providing his / her personal guarantee in terms of FEMA Circulars should also satisfy the required condition(s) to be classified as the 'promoter'.

It is pertinent to note that 'indirect individual promoters of the Indian party' have also been allowed to give their personal guarantee under FEMA Circulars; however, the aforesaid guarantee by the individual promoters should be made for the purpose of business of the joint venture company ("JVC") or WOS abroad.

If we take the aforesaid definition of 'promoters' into consideration then 'indirect individual promoters' ultimately controlling the affairs of the Indian party may provide their personal guarantee in favor of the foreign party in relation to the business of the JVC or the WOS. The aforesaid position is illustrated in the diagram below: 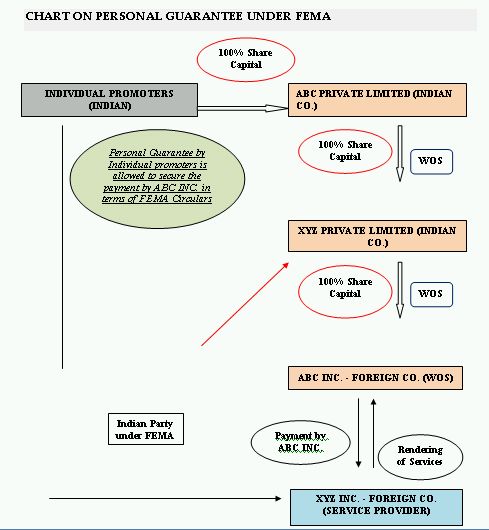 Further, in terms of the provisions of 'Master Circular on External Commercial Borrowings and Trade Credits' dated July 1, 2014, as issued by RBI, personal guarantee by individuals is also permitted to secure the ECBs availed by the Indian entity from recognized foreign lender. However, in this regard, the ECB borrower (Indian party) is required to obtain a 'no objection' from the authorized dealer. It is pertinent to note that the period / tenure of personal guarantee must also be co-terminus with the maturity of the underlying ECB.

Except in case of ECB transaction or transaction pertaining to JVC or WOS as mentioned above, there are no other instances under foreign exchange laws whereby the RBI has allowed the individual promoters of the Indian party to give personal guarantees in favor of the foreign party / lender in other international commercial transaction. Hence, issuance of personal guarantee (except as mentioned above) in relation to any other international commercial transaction will require the prior permission of the RBI.

Indian entities while structuring any international commercial transaction must keep in mind that the personal guarantee of the individual promoters is not permitted in case of every commercial international transaction except with the prior approval of RBI or as mentioned above. There is no specific provision under FEMA / FEMA Circulars, whereby, the personal guarantee given by the individual promoters in violation of the provisions of FEMA is considered as void. However, in case of violation of any provisions of FEMA including FEMA Circulars, the defaulting party shall, upon adjudication, be liable to a penalty up to thrice the sum involved in such contravention where such amount is quantifiable, or up to two lakh rupees where the amount is not quantifiable, and where such contravention is continuing one, further penalty which may extend to five thousand rupees for every day after the first day during which the contravention continues.