by Shashwat Sharma and Shipra Padhi
Nishith Desai Associates
Your LinkedIn Connections
with the authors
To print this article, all you need is to be registered or login on Mondaq.com.

Recently, the Authority for Advance Rulings ("AAR") in the case of GEA Refrigeration Technologies GmbH, In re,1 ruled that the income derived by German shareholders from the sale of equity shares of a German company (holding shares of an Indian company) to another German purchaser is not chargeable to tax in India under the provisions of the Income Tax Act, 1961 ("ITA") read with the provisions of the India Germany Double Taxation Avoidance Agreement ("Treaty").

The applicant before the AAR in this case, GEA Refrigeration Technologies GmbH (the "Taxpayer"), is a German company and a part of the GEA Group AG, one of the largest system providers for food and energy processes.

In order to grow its business by gaining access to a wider range of cooling applications and to enhance the know-how with regard to environment friendly solutions, the Taxpayer entered into a Share Purchase Agreement dated December 16, 2010 to acquire an unrelated German company, Bock Kaltemaschinen GmbH ("Bock Germany") at a purchase price of Euro 40,504,000 (approximately INR 2533 million, as on 31 March 2011) (the "Transaction"). This purchase consideration was paid to the shareholders of Bock Germany, all of whom are German residents. 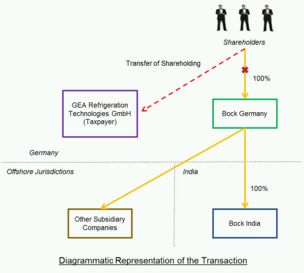 The Taxpayer had obtained a fair market valuation report which valued the shares of Bock India at INR 136.7 million (as on December 31, 2010), while the total value of Bock Germany was determined to be INR 2544 million.

The Taxpayer filed an application before the AAR regarding the below questions relating to the tax treatment of the Transaction in India:

Analysis of the key provisions:

After the Supreme Court of India issued an order in favour of the taxpayer in the landmark Vodafone BV International Holdings v. Union of India case,2 the Indian Government had amended the Section 9 of the ITA to include indirect transfer provisions which "clarify" that if an asset, being a share or interest in a company or entity registered or incorporated outside India, derived its value, directly or indirectly, substantially from an asset situated in India, the gains arising from the transfer of such share or interest would be taxable in India, with retrospective effect. As per Explanation 6 to section 9(1)(i) of the ITA, a foreign company shall be deemed to derive its value 'substantially' from assets located in India where value of Indian assets on the specified date:

Based on a sustained and loud outcry from the industry and various stakeholders, these provisions were further modified to include a de minimis threshold along with further clarifications. Detailed rules on the valuation aspects of indirect transfers have been put in place under Rule 11UB of the Income Tax Rules, 1962.

The indirect transfers provisions continue to remain a matter of concern for foreign taxpayers, and have been discussed in our hotline on the recent circular issued by the Central Board of Direct Taxes on the subject which may be accessed here. It is in this backdrop that the AAR has pronounced this ruling.

Non-Applicability of Indirect Transfer Provisions: The AAR relied upon the fair valuation report submitted by the Taxpayer which clearly brought out the fact that Bock Germany derived only 5.40% of its total value from Bock India with the rest of its value being derived from its holdings in other subsidiaries. This valuation report was consistent with the formula prescribed under Rule 11UB of the Income Tax Rules, 1962. Since this figure was far short of the threshold of 50% mentioned in Explanation 6 to Section 9(1)(i) of the ITA, the AAR held the indirect transfer provisions under the ITA should not apply to the Transaction.

Interestingly, while the tax authorities admitted that these figures along with the positions taken by the Taxpayer may be correct, they contended that in case any discrepancy was subsequently found in the valuations (leading to the conclusion that the threshold of 50% was being met), the assessing officer should be entitled to act as per the provisions of the ITA and not as per the ruling of the AAR. The AAR agreed with this contention on the basis that the ruling was being given in respect of a specific fact-pattern and would not be valid for another set of facts.

Taxation under the Treaty: The AAR also examined the relevant provisions of the Treaty to examine whether the Transaction would lead to any Indian tax consequences. Article 13(4) and 13(5) of the Treaty read as follows:

"4. Gains from the alienation of shares in a company which is a resident of a Contracting State may be taxed in that State.

5. Gains from the alienation of any property other than that referred to in paragraphs 1 to 4 shall be taxable only in the Contracting State of which the alienator is a resident."

In the instant case, it was not disputed that the company whose shares were being alienated, i.e., Bock Germany, was resident in Germany. Also, all the 9 selling shareholders of Bock Germany, as well as the Taxpayer, were German residents and the payment of the purchase consideration was also made in Germany. As a result, the AAR held that the Transaction could only be taxed in Germany as per Article 13(4) of the Treaty.

With respect to the application of Article 13(5) of the Treaty to the facts of the instant case, the AAR referred to the judgement of the Supreme Court of India in the Vodafone case (Supra), where it was held that controlling interest does not constitute a capital asset distinct from the shares, to hold that the instant case simply involved a transfer of shares which would not attract Article 13(5). The AAR further clarified that even if it were to accept a view that some other rights other than shares were transferred, to apply Article 13(5), tax could still only be charged in the country of the transferor (the shareholders of Bock Germany) i.e., Germany. Therefore, even on this ground the gains arising from the Transaction could not be brought to tax in India.

The AAR placed reliance on the judgement of the Andhra Pradesh High Court in the case of Sanofi Pasteur Holding SA v. Department of Revenue, Ministry of Finance3 in this regard, which had a similar fact pattern and required an analysis of the India-France tax treaty. In Sanofi, it was held that the transfer of shares was not taxable in India owing to Article 14(6) of the India-France Double Tax Avoidance Agreement. This Article 14(6) is analogous to Article 13(5) of the Treaty and provides that in case of a transfer of shares other than those covered in the other paragraphs, the country of which the alienator is the resident shall have the right to tax.

No Applicability of Withholding Tax provisions: The AAR placed reliance on the judgment of the Supreme Court of India in the case of GE Technology Centre P. Ltd. v. CIT,4 and held that since it had already concluded that the capital gains arising out of the Transaction are not taxable in India, the question of applicability of Sec 195 of the ITA does not arise.

Given the concern and uncertainty persisting in the minds of non-resident taxpayers on account of the indirect transfer provisions of the ITA, this ruling from the AAR is most certainly a welcome one. Importantly, it re-iterates the position laid down by the Andhra Pradesh High Court in Sanofi (supra) that if a particular transaction involving the indirect transfer of an Indian company is covered by a tax treaty, the provisions of Section 9(1)(i) will no longer apply. Further, where it is clearly demonstrated through a fair market valuation report that a foreign company does not derive it value substantially from assets located in India, the Indian courts will not apply the indirect transfer provisions to a transfer of shares of such a company. However, the AAR cannot delve into a question which involves determination of fair market value of any property due to the bar under Section 245R of the ITA. While this aspect has not been dealt with in detail in the ruling, the AAR has clarified that the ruling is based on the facts presented in terms of the valuation, and will not apply to all factual circumstances.

The ruling should boost confidence amongst non-resident taxpayers and remove some of the uncertainty surrounding the application of these provisions once the valuation of the company whose shares are being transferred is examined.