by Shashwat Sharma , Ashish Sodhani and Rajesh Simhan
Nishith Desai Associates
Your LinkedIn Connections
with the authors
To print this article, all you need is to be registered or login on Mondaq.com.

Recently, the Mumbai Bench of the Income Tax Appellate Tribunal ("ITAT") in the case of NGC Network Asia LLC v. Joint Director of Income Tax1 held that "advertisement airtime" of a television channel cannot be considered to fall under the category of "goods" as it is not capable of being independently used in the absence of consent from the owner of the television channel. The ITAT distinguished this case from the Supreme Court judgment in DIT (International Taxation), Mumbai v. Morgan Stanley & Co. Inc.2 on facts and held that the rule propounded in this landmark judgment only applied to cases where a foreign company was making payments to its associated enterprise in India and not vice versa.

NGC Network Asia LLC ("NGC Asia"/"Taxpayer"), is a company based in Delaware, US and is engaged in the business of broadcasting its two television channels in various countries, including India. The Taxpayer has a wholly owned subsidiary in Mauritius, NGC Network (Mauritius) Holding Limited, which holds 99% of the shares of NGC Network India Private Limited ("NGC India").

NGC India has been appointed as the distributor of the television channels owned by the Taxpayer and to procure advertisements for telecasting on these television channels. As consideration, NGC India has been paying the Taxpayer (i) fees for distribution rights; and (ii) revenue from advertising. The Transfer Pricing Officer ("TPO") had found this transaction to be at arms' length.

For the Assessment Year in question, the Assessing Officer ("AO") considered NGC India as a dependent agent Permanent Establishment ("PE") of the Taxpayer and attributed a portion of the revenue from advertising to India. Further, the AO held that the fees for distribution rights were in the nature of "royalty" and hence, taxable in India as per Article 12 of the India US Double Taxation Avoidance Agreement ("Treaty"). The Dispute Resolution Panel ("DRP") confirmed the draft order passed by the AO. Aggrieved by the order, the Taxpayer preferred an appeal to the ITAT. 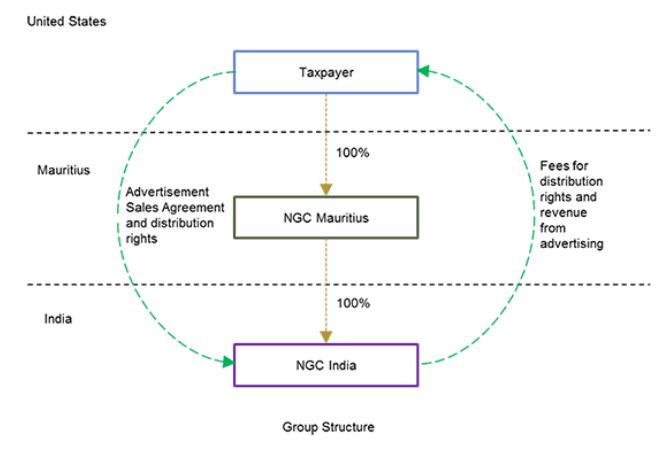 Whether the revenue earned by the Taxpayer was subject to income tax in India as per the provisions of the Income Tax Act, 1961 ("ITA") read with the Treaty?

"Advertisement air time" is not goods: The Taxpayer drew attention to the judgments of the Supreme Court in Tata Consultancy Services v. State of Andhra Pradesh3 and CST v. Madhya Pradesh Electricity Board,4 wherein it was held that properties which are capable of being abstracted, consumed and used and/or transmitted, transferred, delivered, stored or possessed etc., should be classified as "goods" and argued that "advertisement air time" is one such property. The ITAT, however agreed with the contention of the AO that "advertisement air time" cannot be considered to be "goods". It held so on the basis that while "goods" can be used/consumed by anyone independent of, or without any support from, the manufacturer, it was not the case with "advertisement air time". "Advertisement airtime" distributed by NGC India had no value with regard to other television channels and thus, was not capable of universal use. The Taxpayer's concurrence to telecast advertisements and actual telecasting alone brings value to the "advertising airtime" and hence, it cannot be separated from the Taxpayer.

Nature of relationship between the Taxpayer and NGC India: The Taxpayer submitted that the agreement between the Taxpayer and NGC India explicitly stipulated that it was on a principal-to-principal basis. Further, as per the agreement, NGC India had been given full right to use its own sales personnel to sell the airtime, solely decide the price for the airtime and enter into contracts with customers at its own risk. On this basis, the Taxpayer submitted that NGC India did not act on behalf of the Taxpayer but rather in its own right and hence, the basic ingredient of an agency contract was not fulfilled in the present case. The Taxpayer also contended that NGC India was getting a fixed fee for distributing the "advertisement airtime" and not a commission and this should be a determining factor in deciding the nature of relationship between NGC India and the Taxpayer.

The ITAT, however, held that the relationship between the Taxpayer and NGC India is not one of principal-to-principal but of principal-agent. In coming to this conclusion, it relied on the case of the Delhi High Court in CIT v. Idea Cellular Limited,5 wherein it was held that in a principal-to-principal relationship the ownership passes to the distributor from the manufacturer and the manufacturer has no further role. The ITAT had already established that "advertising airtime" is not in the nature of "goods" and hence, the concept of purchase and sale of goods could not be applied to the facts of the present case. The involvement of the manufacturer, i.e., the Taxpayer was essential even after the distribution of the "advertisement airtime" by NGC India in order to give value to the airtime and there was thus, a continuing dependence on the manufacturer/Taxpayer. As a result, despite the agreement between the two parties explicitly stating that the relationship was one of principal-to-principal, NGC India can only be considered to be an agent enabling the Taxpayer to procure advertisements for telecasting, and not as an independent seller of "advertisement airtime". The methodology of payment to NGC India was not accepted as the determining factor in this regard.

On the question of attribution of profits, the Taxpayer relied upon a catena of cases7 including the judgment of the Supreme Court of India in Morgan Stanley8 to argue that that since the TPO had found the transaction between the Taxpayer and NGC India at arm's length there was no need for further attribution of profits to any PE of the Taxpayer. However, the ITAT distinguished these judgments on the basis of facts and held that the judgment in the case of Morgan Stanley9 only applied to cases where a foreign company was making payment to its associated enterprise/PE in India. In the instant case, payments were being made by an Indian company to its associated enterprise abroad and hence, further attribution was necessary.

Fresh examination of treatment of fee received by Taxpayer as "royalty": The Taxpayer submitted that "broadcast distribution right" did not fall under the definition of "copyright" as provided under the Copyright Act, 1957 and relied upon a plethora of cases10 to distinguish that "broadcast distribution right" was separate from "copyright". It contended that payment received from NGC India was not towards copyright and hence, not in the nature of "royalty". It was argued by the Taxpayer that NGC India had no rights in the underlying copyright of the Taxpayer but just a right to use the copyrighted article (i.e., the channel) and therefore, the consideration paid by NGC India for this right should not be considered as "royalty". The AO, however, argued that payments made by NGC India in consideration for this right is in the nature of "royalty" as the Taxpayer is the owner of the copyright and NGC India is paying consideration for use of this copyright.11 Such license fee payment is covered under "royalty" as per Article 12 of the Treaty. It was further submitted that the US considered broadcast reproduction rights as "copyright".

The ITAT observed that the word "process" had been used in the Treaty as well as the ITA and the Finance Act, 2012 has inserted Explanation 6 to Section 9(1)(vi) of the ITA, which provides that "process" includes the transmission by satellites. Since the case law cited by the Taxpayer were decided prior to this insertion, the question of applicability of Explanation 6 had not been examined in these judgments. Accordingly, the ITAT did not rule on the above submissions and directed the AO to re-examine this issue in light of the amendment.

This judgment may lead to adverse tax consequences for television channel owners as the engagement of a distribution agent with respect to the same may lead to the characterization of the agent as a PE of the channel owner. Even a careful wording of the agreement between the foreign broadcaster and the Indian distributor may not be enough to mitigate the PE risk. Further, the relationship between the foreign broadcaster and the Indian distributor will always be considered one of 'principal-agent' which may lead to parties becoming devoid of other benefits which would have been otherwise available.

This ruling has clearly limited the application of the landmark judgment in Morgan Stanley12 to exclude those cases where the payment is being made by an Indian company to an associated enterprise abroad. In such cases, if the foreign company has a PE in India, attribution of profits may be made to the PE despite the transaction being at arms' length.

On a separate note, it should be noted that the broadcasting sector is a rapidly evolving one and since most of the issues in this sector have emerged only recently in the past few years, the law has not yet been settled by higher courts. In the absence of judicial precedent, the parliament, by way of a law and the Central Board of Direct Taxes, by way of notification under section 295 of the ITA, have the power to clarify the legal position in this regard. Pending the resolution of such issues, there is bound to be significant litigation around disputes with the tax authorities.

"Notwithstanding the provisions of paragraphs 1 and 2, where a person—other than an agent of an independent status to whom paragraph 5 applies - is acting in a Contracting State on behalf of an enterprise of the other Contracting State, that enterprise shall be deemed to have a permanent establishment in the first-mentioned State, if :

(a) he has and habitually exercises in the first-mentioned State an authority to conclude on behalf of the enterprise, unless his activities are limited to those mentioned in paragraph 3 which, if exercised through a fixed place of business, would not make that fixed place of business a permanent establishment under the provisions of that paragraph;"